Prior to reading this picturebook biography, I did not know who Sara Josephine Baker was. While I am familiar with Elizabeth Blackwell (see my review of Who Says Women Can’t Be Doctors by Tanya Lee Stone and Marjorie Priceman here), it is the first time that I am learning of Sara Josephine Baker’s astounding contribution to the field of medicine and the children in New York, where she served as the first pediatrician. 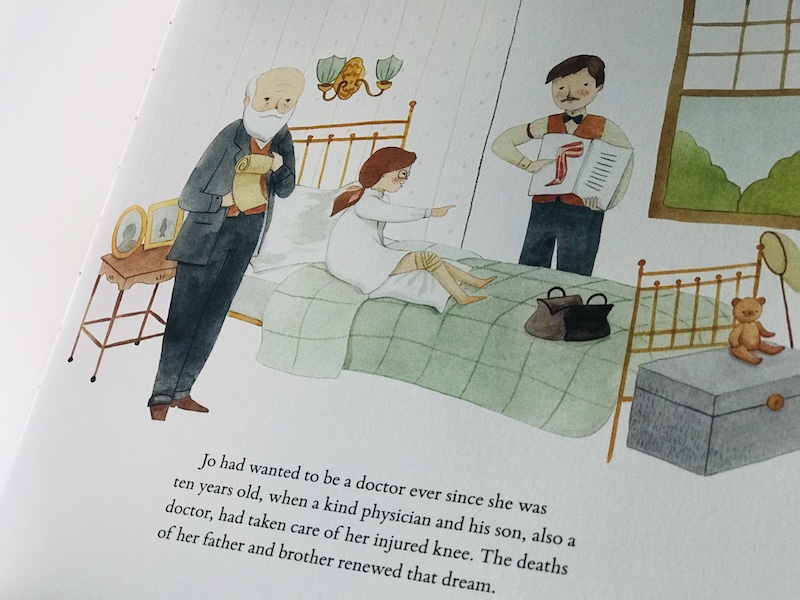 The story begins with Jo being described as a tomboy who enjoyed doing activities that are not normally expected of young girls born in the late 1800s. She was inspired to become a doctor by the physicians who took care of her when she was a young girl, and when both her father and brother died from typhoid disease. However, her goal was perceived as unladylike by most:

In Jo’s day, most people thought that studying medicine was not for women.

“It’s too gruesome!” said others.

Dr. Jo continued to pursue her dream despite the prejudice and gender discrimination – and eventually became the first Director of the New York City Department of Child Hygiene. Her new position allowed her access to the poorest of the poor and make a difference in the lives of immigrants who had no means of taking care of their newborn, resulting in diseases and infant death.

Through the Little Mothers League (making this a perfect book for our current reading theme), Dr. Jo trained girls age 12 and older in basic infant care – a fact that was included in the Author’s Note found at the end of the book. This is truly another title that deserves to be added in any one’s library – what a gift to know more amazing women who charted paths where none existed previously in their attempts to not just pursue their own dream, but also to address the needs of people who live in the margins.