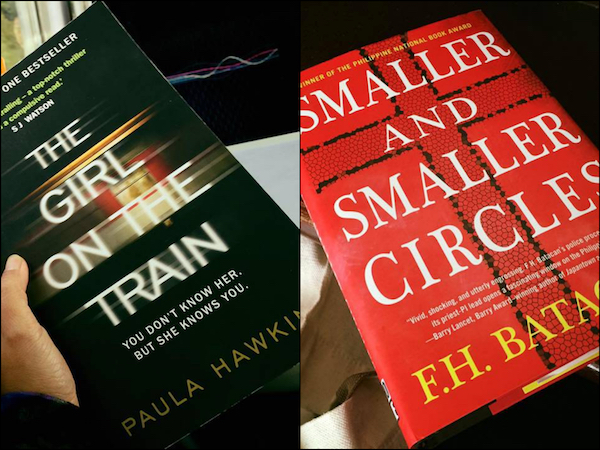 We’re also inviting everyone to join our Award Winning Books Reading Challenge for 2015 (#AWBRead2015)! You still have a month left before the year ends to win book prizes.

Here is the sign up page and the November-December linky if you already have reviews up. One randomly-selected participant would receive a copy of The World of Norm: May Contain Nuts by Jonathan Meres courtesy of Pansing Books.

I read these two novels months ago. My recollections of the details from the books are a tad hazy at this point, but regardless, I thought that it would still be good to share these titles for our current reading theme.

The Girl On The Train

Writer: Paula Hawkins
Published by: Doubleday, 2015
Bought my own copy of the book.

This novel was my indulgence while I was traveling in London. I bought it while I was in Munich a week before my travel to the UK, and it was well worth the splurge. Since I very rarely review adult novels here at GatheringBooks, I thought I’d adopt a different approach, especially since Penguin has very kindly prepared a set of questions meant for book club discussion. I selected just a few questions to guide my meandering thoughts about the novel.

We all do it—actively watch life around us. In this way, with her own voyeuristic curiosity, Rachel Watson is not so unusual. What do you think accounts for this nosey, all-too-human impulse? Is it more extreme in Rachel than in the average person? What is so different about her?

I think some of the questions posted here go beyond me – particularly as to what accounts for this “all-too-human impulse” of “voyeuristic curiosity.” My researcher’s spirit compels me to check the literature to provide a more intelligent response – so I would most probably skip that one. As to what is different about Rachel, in general, one thing struck me really as I was reading the novel: this lady is suffering from depression. Mix in substance abuse, and you have recipe for murder/crime novel.

How would you have reacted if you’d seen what Rachel did from her train window—a pile of clothes—just before the rumored disappearance of Megan Hipwell? What might you or she have done differently?

Hah. If it were me, I would probably have not gotten involved. The most I would have done would be to alert the police officers about my nagging suspicion – talk to someone who knows a police officer, that kind of thing – rather than insert myself into the investigation just like what Rachel has done. However, I am not Rachel – with all her emotional turmoil, her feelings of listlessness, her direction-less life. The pile of clothes has given Rachel a sense of purpose – something that allowed her to go outside of her misery to focus on something she found fascinating – a mystery that needed solving. At one point, I also felt that she has blurred the boundaries between what is real and imaginary, which made her accounts a tad confusing.

In both Rachel Watson’s and Megan Hipwell’s marriages, deep secrets are kept from the husbands. Are these marriages unusual or even extreme in this way? Consider how many relationships rely on half-truths? Is it ever necessary or justifiable to lie to someone you love? How much is too much to hide from a partner?

These questions are borderline nosy, don’t you think? The book club discussion might turn into a group therapy session! Allow me to focus on what I remember dimly from the novel. I tried to like Megan Hipwell, she seemed like a decent enough person – the idealized version of Rachel Watson’s imagined life. I suppose that is the problem with images/projections/ideals – they rarely live up to people’s expectations. Truth be told, I was expecting something more life-altering from Megan’s past – an episode in her life which she holds responsible for her turning out the way she did – at least the way she explains it to her therapist. Yet it seemed to me more like the bad choices of a grieving young person – that ultimately she will have to live with and embrace as part of her so that she can move on from it. Yet instead of owning it, she continues to make deliberately bad choices citing her earlier traumatic past as her justification for her errant ways – demonstrating a total lack of responsibility and agency. Yes, there is judgment there somewhere, I suppose.

What about the lies the characters tell to themselves? In what ways is Rachel lying to herself? Do all people tell themselves lies to some degree in order to move on with their lives? Is what Rachel (or any of the other characters) is doing any different from that? How do her lies ultimately affect her and the people around her?

This is all I have to say about this: 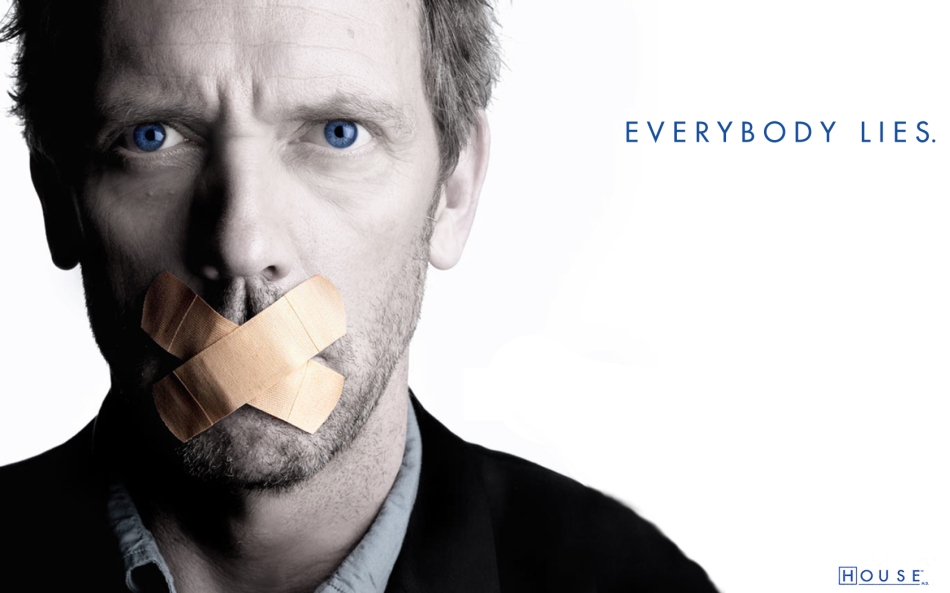 A crucial question in The Girl on the Train is how much Rachel Watson can trust her own memory. How reliable are her observations? Yet since the relationship between truth and memory is often a slippery one, how objective or “true” can a memory, by definition, really be? Can memory lie? If so, what factors might influence it? Consider examples from the book.

This is what made the novel a page-turner for me – my desire to get at the different versions of the truth for me to paint a clear picture in my head about what exactly happened to Megan and to Rachel as well, despite the latter’s neediness. Most reviewers tend to liken the plot to that of Gone Girl which I read last year – and I can see the parallels, particularly with the unreliable narrators whose memories are dubious at best. However, in Gillian Flynn’s Gone Girl, I remembered the female protagonist being quite the narcissist and self-satisfied with her own smarts (perfectly justified really since she pulled off such a brilliant criminal act), whereas in The Girl on the Train there was a great deal of self-loathing – both for Rachel and Megan.

The Guardian named Smaller and Smaller Circles as one of the best recent crime fiction novels and I could understand why. Unlike The Girl on the Train which afforded me a feeling of dread each time I open the pages, it is with a kind of giddy anticipation that I go back to this novel every night before I go to bed. It’s similar to watching a riveting episode of Criminal Minds or CSI perhaps before retiring for the night. My book club (Saturday Night Out for Book Geeks) discussed this novel a few months back. In fact, our good friend, children’s book author David Seow shared his thoughts in his blog – he was also our gracious host that evening (thanks again, Dave for hosting and to your mum for the fab feast).

The setting of the novel is in the gritty metropolis of Manila (where I grew up). Add in a serial killer who mutilates young boys (undersized, famished street children) every time it rains, and hides the scarred bodies in smelly dump sites; then throw in two hot learned Jesuit priests who are trained in forensics to assist in the criminal investigation; then put in a backdrop of the staggering corruption and bureaucracy of law and justice in the Philippines – and you have a social commentary wrapped in a seemingly-unsolvable crime. I’ve often wondered about the phrase “compulsively-readable” each time I come across it in blurbs – but this is what describes the novel quite well. While I initially felt that it was borderline pretentious in the beginning with the quote from Nietzsche – I gradually realized that the author was setting up the entire world for the reader, building it brick by brick with little details – from the music (of course it has to be the hip R. E. M.) to the setting (yes, the setting is a character here as well) to the tiniest description of Father Gus Saenz, Father Jerome Lucero, and Director Lastimosa; and the continual foreshadowing as evidenced in the smaller and smaller circles found at the beginning of each section where the reader gets a feel of how the criminal’s mind unravels. This is truly a thoroughly engaging read that crime enthusiasts should definitely check out.

Maira Kalman’s And The Pursuit Of Happiness and Leigh Bardugo’s Six Of Crows. These are novels that I enjoyed tremendously and will be posting more detailed reviews about them soon, particularly the latter as it fits our current reading theme to a T.

This week, I plan to read the following titles:

I have been meaning to read this for the longest while – now I have the perfect excuse given our current reading theme: The Screaming Staircase by Jonathan Stroud.

And because I need to have a graphic novel fix every week: Calling Dr. Laura: A Graphic Memoir by Nicole J. Georges. 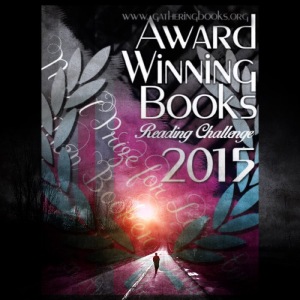 19 comments on “[Monday Reading] Adult Crime Novels in F. H. Batacan’s “Smaller and Smaller Circles” and Hawkins’ “The Girl on the Train””