While these two books are technically not about romantic love – they still depict a love for the outdoors, and a love for magical, beautiful, do-nothing days … if only we could have more of these days.

On A Magical Do-Nothing Day

A mother and a young child go to their cabin in the forest, while their father is back in the city. It is clear that the child is bored and missing his dad, and is preoccupying himself killing Martians while the mother is busy working at her desk. 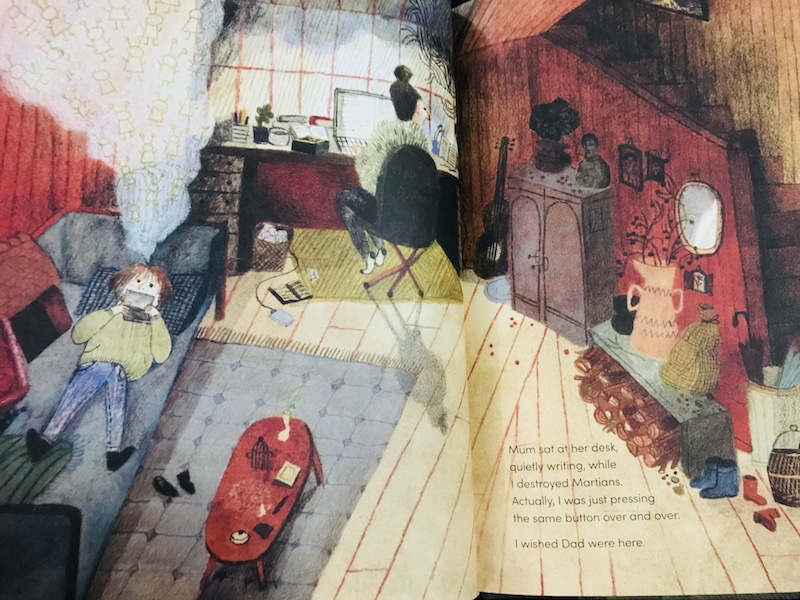 The boy finally steps outside of the cabin, despite the rain, wearing this bright orange parka, game in hand. The moment he steps outside of the house, the forest fills the entire page – and as he jumps from one stone to another, the game slips through his fingers and gets lost in the chilly pond.

Devastated by the loss of his device and left with nothing else to do, he begins to really pay attention to the vast world around him: the ground beneath his feet; the snails with their soft, jelly antennae; a world of mushrooms surrounding him. As his hands feel through the moist earth, he realizes that there are treasures all around him. I find that I even didn’t mind so much that the typography is somewhat hidden behind the murky depths of the forest – it is also peering through it to find what is beneath, similar to the act of discovery of the young boy.

I could see why there may be people who would see the story as somewhat didactic, with the message of getting off one’s device to enjoy the outdoors. But I find that to be too reductionist. There is so much more in the narrative apart from that. The boy’s transformation is what caught me most of all, made more credible by how changed he seemed to be when he finally went home, carrying within him the wonders of the outside world, especially as he confronts himself in the mirror…

… and sees the image of his father reflected back at him. I also felt that his ultimate decision not to share what he discovered outside to his mother – is not a sign of the lack of intimacy between them, but is part of the boy’s transformation. Somehow, this act of keeping something to himself signified that he has crossed some kind of threshold where he does not simply blurt out things unthinkingly. Rather, it is a burgeoning sign of his valuing of his privacy, that there are things that are his alone, yet does not in any way detract from the quiet moment that he shared with his mother over a cup of hot chocolate:

I also like the fact that it’s somewhat difficult to tell whether the main protagonist is indeed a boy or a girl. It was the image above and his recognition of his father in the mirror as he looks at it that made me think he was a boy. But perhaps this child is a girl, too – something to think about further. I was truly smitten by this book. I find Beatrice Alemagna’s work to be multi-layered and that there are more things to discover about her picturebook in your second or third reading – a sure sign that it is something you should own and get for yourself.

This book follows the same premise as Alemagna’s – young kids trapped inside their home while the rain rages on outside. Suzy Lee once again creates something very special with this book – even the title page has a story to tell – see below. I find the girl to be particularly adorable.

Yet unlike the boy in the first story who was absorbed in his device initially, the children here were playing with boxes, crayons, and seemed just a wee bit touched by magic, and Jackson’s text conveys that simply but effectively. 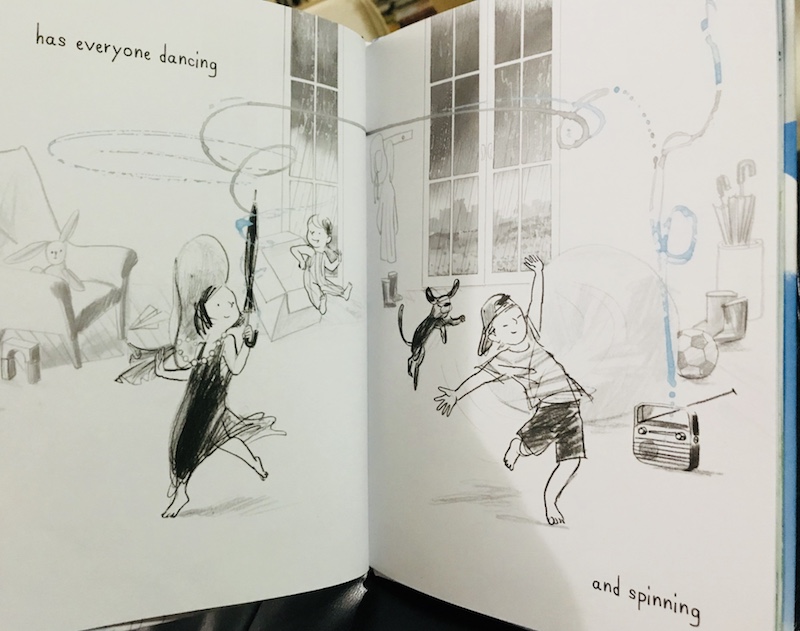 Their romp finally brought them outdoors despite the rain, with umbrellas in their hands, their feet and imagination taking them on a journey. Look at that young girl with the necklace and the hat.

Suzy Lee also plays with colours here – the drab greys broken with the occasional splash of blue initially, then you can see a slight green peeking through in the above image. And as the sun shines, there is a psychedelic burst of colours that is nothing short of magical.

The fact that it has a different size compared to the usual picturebook also appealed greatly to me, reminding me of those I-Can-Read Seuss books when I was younger. The image above also makes this the perfect book to pair with the Magical Do-Nothing Day with the girl hanging upside down in the tree’s branches. I have no idea why this is not in the list of best picturebooks in 2017 as it should be. Find these two books and celebrate magical, beautiful, do-nothing days.

#LitWorld2018GB Update: 10/11 of 40 (Italy – Beatrice Alemagna was born in Bologna, Italy, although she currently lives in France; Korea – Suzy Lee.)