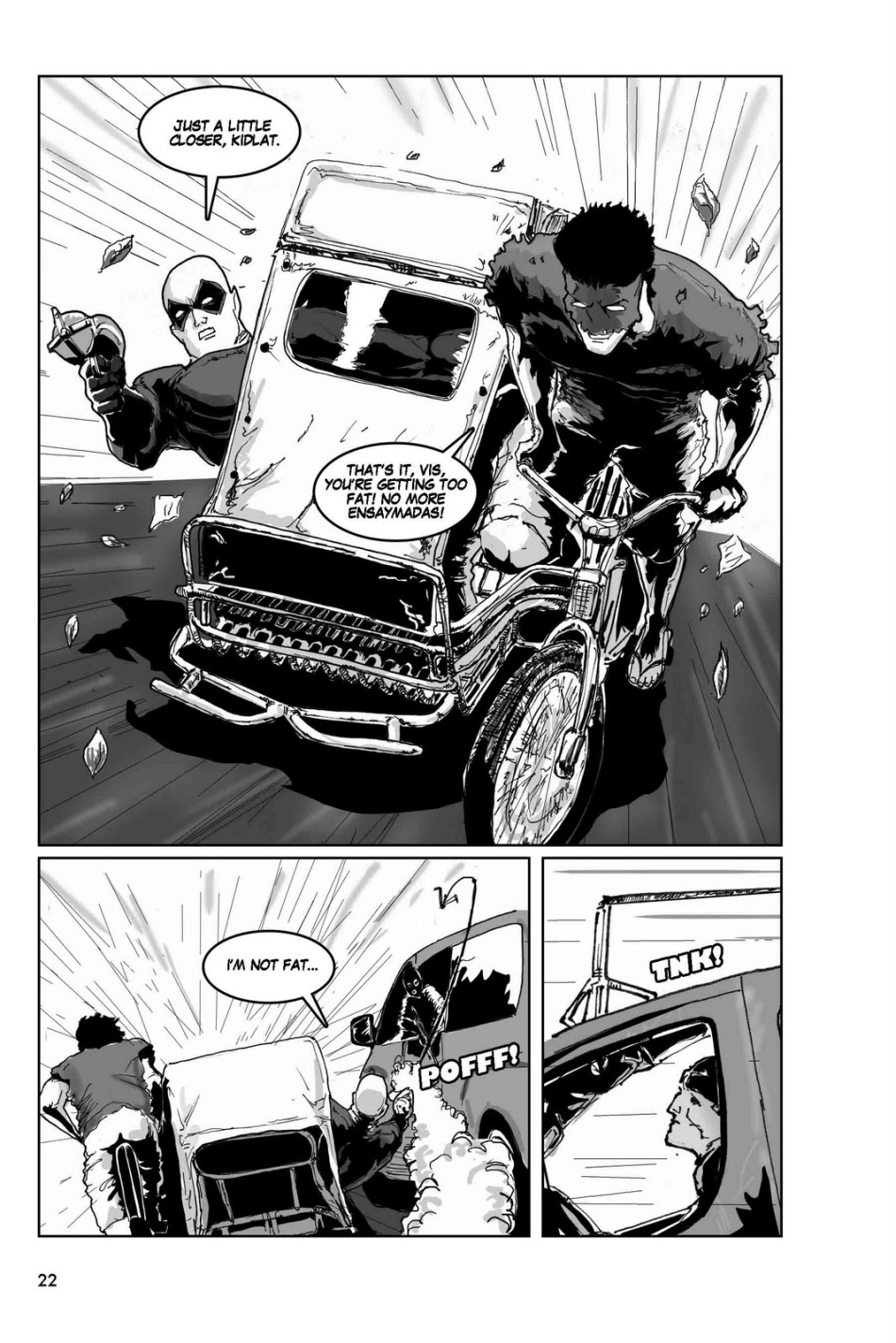 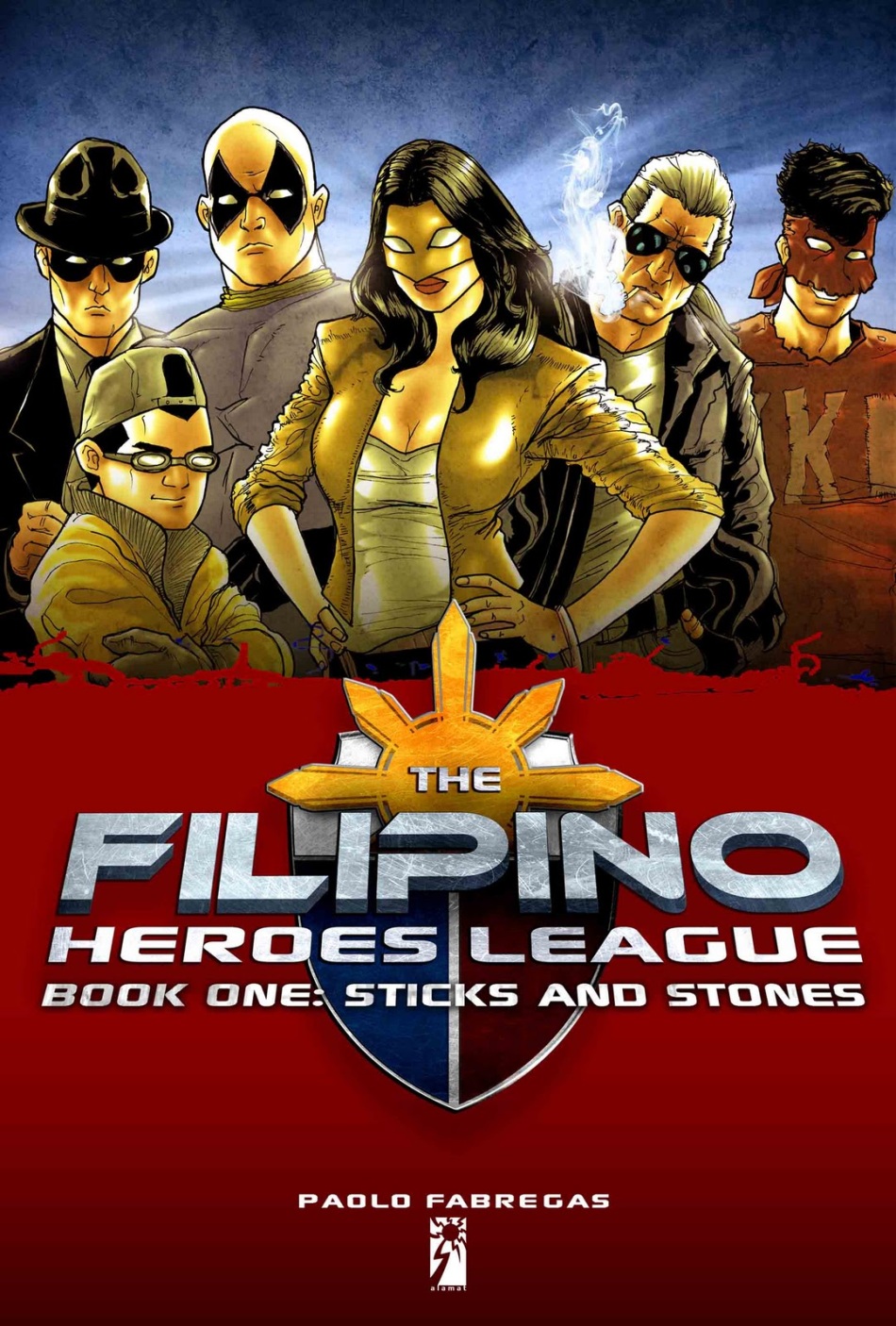 I have to confess that I am not as familiar as I would wish to be when it comes to comic books or graphic novels. While I have reviewed Dave Mc Kean’s and David Almond’s The Savage and Slog’s Dad, as well as Shaun Tan’s The Arrival and Tales from Outer Suburbia – they fall more within the realm of illustrated YA fiction than strictly a comic book or graphic novel. I do have my copies of Neil Gaiman’s Sandman but sadly I have not gotten around to reading it yet.

Thus, my review would only be based on my own unstudied appreciation and understanding of this particular graphic novel (Book One: Sticks and Stones of The Filipino Heroes League – FHL – by Paolo Fabregas) with limited reference to other novels in the said genre, unfortunately. Apologies to comic book aficionados, I plan to rectify this lack of know-how on my part as soon as I can find the time. This graphic novel, however, is more suited to an older audience (teenagers, young adults onwards) rather than very young children.

Since we are hosting Interview Wednesday this week, it’s kind of exciting that we have Paolo and his graphic novel for our Special Feature in GatheringBooks.

A Sense of the Familiar. As I was reading through the book (I finished it in a day, it’s a fairly quick read), I find myself smiling as I notice a lot of things that are keenly familiar to the Filipino sensibility. The novel began with a news report of a beloved Filipino Superhero named Bomb Boy who became an American Citizen.

I also can not help laughing out loud when I read about the Overseas Filipino Heroes who are now based in various parts of the globe: Inferno is making steel in India, Zapper is lighting Paris, while Crush is in a diamond mine in South Africa (p. 60). Now that I am based in Singapore, I for one can appreciate the irony of this.

Another aspect that I found so humorous in the novel and so very Pinoy as well is the constant fascination with showbiz personalities. One of the super heroes Invisiboy, has this huge crush on Charmaine Riviera – and rather than just  a superfluous add-in to the narrative, it actually captures the Filipinos’ sense of awe when talking about people they consider demi-gods/goddesses on the big screen.

Naturally, there are also elements of graft and corruption so very Filipino-style: impeachment cases charged against the State Leader, Opposition Assassinations, alleged corruption and human rights violation. It is not surprising that as I read it, I had a sense of being back in the Philippines.

Q and A with Paolo Fabregas

Paolo, what was your intention behind introducing the OFW component into your story? Would you say that your travels overseas also contributed to this reality that hits close to home?

For me, the OFW component to superhero-ing was absolutely vital for creating the right kind of context for the story. I wanted the story to take place in a world that was familiar and recognizable. It’s the same Manila, the same problems, the same poverty but with super heroes.

There are other forces that the usual superhorse contend with (burglaries, supernatural phenomenon, super villains) – could you share with our readers why you thought of introducing the graft and corruption component to the narrative?

In line with that real-world context of the story, I also wanted my heroes to face the real issues of Philippine society. I didn’t want them to be stuck in the Marvel or DC setup of super-good guys versus super-bad guys. I also didn’t want them to use their super abilities to fight petty things like crimes against private property. I wanted them to fight against the BIG problems of the country and for me graft and corruption is one of the biggest if not THE biggest problem we face.

Superheroes, the Third World Style. Budjette Tan, the editor of The FHL wrote in his introduction:

“He had me at: PEDICAB. Super heroes rushing to save the day in a rickety pedicab. Something you don’t see everyday. Something that’s very Pinoy.”

Check out some of the superheroes we see in the big screen: Iron Man (billionaire), 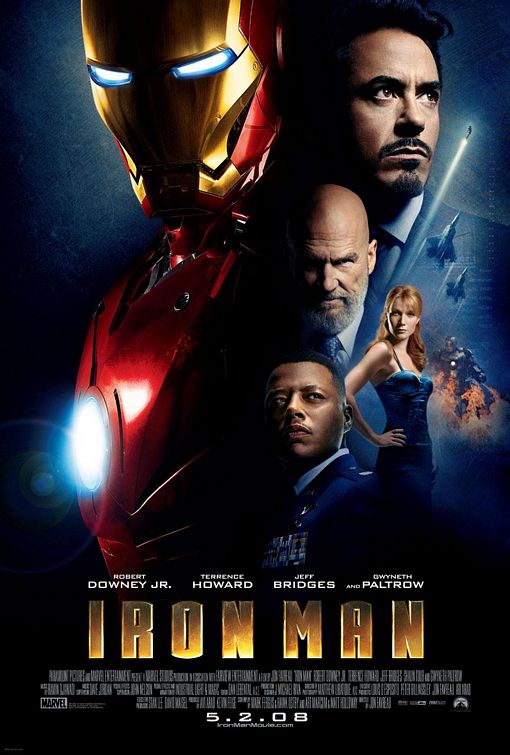 Clark Kent from Smallville (farmer yes, but he has acres and acres of land and he earns a few more besides being a journalist), Green Arrow (another billionaire, I heart Justin Hartley),

In Filipino Heroes League, we get exposed to heroes who have zero resources and zero appreciation from the people they serve. An international super hero gets more press time compared to the local ones regardless of their selfless save of 3000 people from a burning fire. And why do they do it? Is it “to protect and serve the Filipino people no matter the cost?” Wrong. “We do it for the chicks – they like the costumes” (uttered by Filipino Superhero Flashlight). Fair enough. I appreciate candor in men. Haha.

The superheroes’ resources also leave much to be desired: vehicles dating all the way back from the 80s, a super-slow computer (“your celphone has a million times more computing capacity than this clunker”) and a superhero (Kidlat) who can not even afford a pair of rubber shoes. Yet, despite this, the resourcefulness, the talent, the brilliance – are evident in the superheroes’ well-meaning intentions – again very Filipino.

Q and A with Paolo

What led you to create a posse of disadvantaged superheroes which Rocket Kapre in his review describes as the “tragicomedy of poverty”? Do tell us what is going through your creative mind as each of these characters materialized in your mind.

I wanted the characters in the FHL to be approachable – I didn’t want them to be perfect demi-gods like Superman or Batman. So, they’re a flawed bunch – Kidlat’s irresponsible and dirt poor, Flashlight drinks and womanizes, and Invisiboy eats too much. Despite all these flaws, however, they still find a way to fight the good fight – that’s what I personally like about them.

Are there characters that have been inspired by certain Filipino personalities? Case in point would be Flashlight’s supposed-similarity to Filipino rockstar Pepe Smith. Could you share with us your thoughts on this?

The basis of Flashlight is Pepe Smith mixed in with a little Robin Padilla. The Filipino bad boy is really something else and I just had to create a character like that for my book – we all know a guy like Flashlight.

When we had a brief conversation several weeks back, you mentioned that one of your influences in the creation of FHL is Alan Moore’s Watchmen. Could you tell us a little more about this? I have bought my own copy of Watchmen from Davao, but I have not had a chance to really read through it. Do share with our readers whether there are parallels that you have drawn from the heroes in Watchmen and the local FHL?

Alan Moore said, in one of his interviews regarding Watchmen, that if you write about people with super powers, the theme that you will be writing about is power. I used this statement as the starting point for thinking about the FHL. I figured that I could use the super hero genre to write about political power in the Philippines – and that’s what FHL is about, really.

The FHL and Watchmen are similar but only on a surface level – both of them put super heroes in a real world context. Thematically, I see Watchmen as a work of metafiction – it’s a graphic novel about comic books. It’s dark, complex, and a truly spectacular piece of art. I’m using a similar concept but towards a totally different end and in a much less sophisticated way – I hope Alan Moore doesn’t mind.

Spaces in Between and Inspired Artwork. What made FHL work for me are the following:

(1) The nature of villainy which came in the form of books filled with grammatical and factual errors – I relish the geekiness of this all, and the fact that the villains’ headquarters happens to be the Library, of all places.

(2) The fill-in-the-blanks in the narrative that allowed the reader to bring into the narrative their own suppositions, inferences, unfounded conclusions – essentially a space that would allow the creative mind to meander and roam free. I enjoyed that. Somehow, it made the heroes seem more alive, because it is in that space that the portraiture of the comatose leader, the missing villains, the promise of Book 2 became more embodied and multi-dimensional in nature. Thus the characters are not flat sketches or caricatures of an interesting but forgettable superhero comic book – they all seemed light-heartedly real; their witty repartee a breathing truth rather than a tired, hackneyed, inevitable and foregone rendering of that which has been written yet again and again.

(3) I love the artwork! Ok, I admit that I really have very little by way of comparison, not being as schooled in comicbooks as others, but hey, I know artistry and craftsmanship when I see it. Add the fact that this is Paolo’s debut novel. So Congratulations is definitely in order.

I was wondering about the choice of language, though, in the narrative. Being a Filipino Superhero, it might have a different flavor to it, a certain kind of ‘astig’ if the text and verbal exchange were in Filipino. Or if it had been largely bilingual in orientation.

Q and A with Paolo

So tell us Paolo, what should readers expect in Book 2 of FHL?

Expect more! I believe that part of the reason people enjoyed Book 1 is because they had no expectations. I’m painfully aware of this and I’ve tried my best to up the ante for Book 2 – art-wise and story-wise.

From a creative standpoint, were the missing pieces in the text deliberate to kind of tease the reader into reading the subsequent books in the series? What is your vision for FHL? Is it going to be a trilogy? Or do you see it expanding much more?

The gaps in the storytelling are deliberate and many of them will be filled in by Book 2 – but not all of them. I’ve written FHL as a trilogy and, as of right now, I don’t have any plans of extending it. I’m already brewing up other projects beyond FHL.

Any plans of a film adaptation in the works?

None yet! But I’ll certainly listen to offers! Here’s a link to the first 50 pages.

Thank you again Paolo. It is such a privilege to feature your graphic novel here in GatheringBooks. Please watch out for Part 2 of our Feature on Paolo as we discuss his “Creative Journeys” for Interview Wednesday next week.

If you want to know more about FHL, click here to be taken to the official website. For more visual delectation, I would also like to share with you the trailer for Filipino Heroes League:

8 comments on “Interview Wednesday: The Filipino Heroes League (FHL) – A review and Q and A with Graphic Novelist Paolo Fabregas”