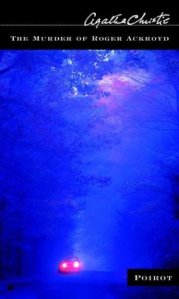 I’ve never read an Agatha Christie before, but it seems unfair to end the Whodunit theme without featuring/reviewing any of her books. After all, she is considered a classic in the genre. However, in my personal attempt to shoot two birds with one stone I chose The Murder of Roger Ackroyd out of the many books by Christie for its inclusion in the 1001 Must Read Books before you die.  Yes, I’m geeky enough to take on the challenge of reading 1001 books. 🙂

Unlike the other crime/detective books, Agatha Christie’s novel is quieter. It isn’t a chase sequence. There is no serial killer, no kidnap victim or a runaway criminal. It’s calmer. Put side to side, to say, Steig Larsson’s Millennium Trilogy, this novel would seem boring. But its not, its gift is in its ability to engage the reader in a mental puzzle. It’s not adrenalin that makes this book, it’s a true Whodunit challenge wherein the murderer is in plain sight.

The Murder of Roger Ackroyd takes us to a small community wherein gossip travels faster than light. Our narrator, Dr. Sheppard, takes on the similar role of  Sherlock Holmes’ Watson, recording the events of the day and how Christie’s main detective Hercule Poirot unravels the mystery of the death of the  rich Mr. Ackroyd.

everyone to his house for a dinner party and dies that same night. Everyone in the party is a suspect; the murder weapon a silver dagger, the motive involves money. The local police take the investigation on first. Inspector Raglan has either the Butler or the missing stepson as his suspect, but Flora Ackroyd, the deceased niece thinks otherwise and hires the retired Belgian detective Hercule Poirot.

Hercule Poirot is a curios character. As he spills information and facts of the investigation to Dr. Sheppard he doesn’t completely speaks his assumptions. He devises plans and stages interviews to discover facts. The reader is engaged by trying to figure who among the characters had the motive, access to the weapon and no alibi. Each character is approached with suspicion and each possibly the murderer, but as the story progresses you wonder if there is an actual murderer.

However, the beauty of this book and maybe the reason in for its inclusion in the daunting 1001 must read list is its ending. As the stage is set to give the murderer an opportunity to come forward and the major suspect, Ralph Paton (the stepson) reveals himself the reader holds his/her breathe and the ending so disturbing yet so logical comes like a soft slap to the face.  If anything the ending is worth waiting for. While Christie’s novel will not keep you turning pages out of adrenalin, it will keep you guessing. If you are a fan of Sherlock Holmes, Murder She Wrote or Clue, this book might just be your cup of tea.

So who Murdered Roger Ackroyd?

The author, Agatha Christie, was a British Crime Writer.  She is best remembered for her 80 detective novels featuring Hercule Poirot and Miss Jane Marple. She is said to be the best selling writer of books of all time, selling roughly four billion copies of her novels. Her books have been adapted as movies and television shows.

3 comments on “Agatha Christie’s The Murder of Roger Ackroyd”