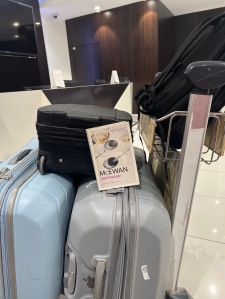 Several weeks back, I was privileged to spend a week-long trip in the Netherlands – a few days first in Amsterdam and a few more days at The Hague for the European Council for High Ability Conference where I presented a paper. Naturally, I had to bring my copy of this book which has been languishing in my shelves for the longest time – along with a few other books translated into English by Dutch novelists – which I will be sharing soonest, I hope.

Due to some unexpected mishap on our flight going to Amsterdam, we had more time than usual, affording me the space to read this entire novel and finish it while we were on our flight to the city of freedom and bicycles. I usually do not watch movies or make use of the in-flight entertainment, preferring instead to read the books I usually bring with me on long flights. I rapidly jotted down my thoughts on my notebook while on the airplane (there was a marriage proposal, by the way mid-flight which interrupted my reading, with the entire cabin bursting into applause, and the pilot announcing that a couple got engaged – I thought that was fortuitous). I am revisiting my notes now, and sharing what I have written here – with a few minor edits here and there for clarity.

A sordid tale of self-congratulatory, middling-successful White men pining for their ex-lover who just died of a rapid degenerative disease – causing them to act like complete [insert your chosen expletive here] competing (quite futile, if you ask me) for the affections of a woman who had just been reduced to ashes. It inevitably ends with mutual destruction, a double murder, and a cameo role played by the city of Amsterdam described lovingly as outwardly intellectual (at least in appearance, according to the author), such that even the street sweepers and the bakers look like learned scholars.

The casual misogyny, the invisibility (yet ghostly spectre) of the dead woman reduced to meaningless and superficial anecdotes: she never washes the dishes nor cleans the house (no mention of these go-getter, ambitious men ever doing anything remotely like this at all, because why, right?) but always manages to look like a Botticelli Venus painting; the pointed jabs at a woman’s worth: hire a woman temp in the paper to write navel-chatting (because not even smart enough to navel gaze) fluff pieces for the mediocre masses who wouldn’t really know any different – is appalling. To think this novel actually won the Booker Prize. I’m willing to bet most of the judges are male, with the same habit of unexamined self-importance and privilege. It is a tale awash in machismo pretending to be smart – and apparently succeeding.

Ok, I just googled the information about the 1998 judges – and to my horror, there were three White women in the judging panel: Penelope Fitzgerald, Miriam Gross, and Nigella Lawson. I lost the bet with myself – making me wonder what they are seeing that I am not; or whether what I am seeing seems unimportant at least to this panel of judges. Or is it merely internalized, this toxic White male gaze that to some degree may be considered flattering by other women, no matter how poisonous it is? I have always said this – and I’ll say it again – the way I read has been changed remarkably after our #WomenReadWomen2019 reading theme. I do not think I will ever read the same way again – and I am grateful for that.