Our reading theme from July-September is Binge-Read: Book Series Marathon. We are expanding the range of this theme to include books that fit the following deliberately-nebulous criteria:

I am thrilled to feature a series of picturebook biographies done on Katherine Johnson’s life. This is Part 1 of 3. 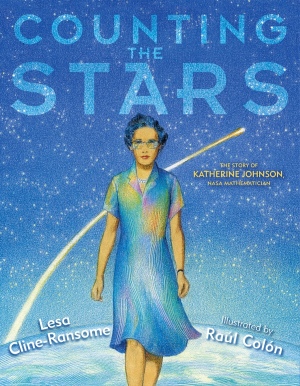 Two weeks ago, I was invited to serve as a Keynote Speaker for a virtual conference on gifted education in Milan, Italy. I curated a set of picturebook biographies depicting women in STEM, and this was one of the books I featured.

Katherine Johnson was born in 1918 in West Virginia, was the first African American woman to integrate West Virginia University’s graduate program in math in 1940 and started working at Langley in 1953. Yet, it was only when the film Hidden Figures was shown in 2016 that more people actually came to know about this astounding woman known as a “computer” and her significant contributions to what was known as the Space Race between the US and Russia in the 1940s.

This picturebook biography focused on Katherine’s early life, how she was supported by her family, and how despite her brilliance and receiving a full scholarship at the age of 15 in West Virginia State Institute, she still had very limited options when it comes to job prospects.

Her college professor provided Katherine a customized curriculum in class and claimed that she would make a good research mathematician. However, when Katherine asked where she will find a job, her Professor responded: “That will be your problem.” I included the image above because the poster beside Katherine cleverly surfaces how there were multiple opportunities open to young boys, while jobs were few and far between for women, even more so for highly qualified, brilliant women of color.

When Katherine was hired at Langley, she chose to ignore the deplorable segregated working conditions and the fact that women were perceived as less capable than men, while the men continued to rely on the women computers to do most of their job for them: the irony was lost on them, at the time, I suppose. I love the image above because it showed how Katherine Johnson steadfastly ignored the rules that women were not supposed to sit at the table in meetings with men, and quietly and purposefully demanded that she attend the meetings to be able to do her job well, and she did.

The fact that this book was only published in 2019 suggests that more remains to be done to support young women in the fields of science, technology, engineering, and mathematics – most especially outstanding young women of color.