When I first heard of this book project from Dr. Stephen Acabado, an archaeologist friend of mine who is teaching at UCLA and has been based in the US with his family for over ten years now, I knew that it would fit our #SurvivalStories2021 reading theme as we endeavour to decolonize our bookshelves. Stephen is not a stranger to GatheringBooks as he wrote a piece on Raising a Reading Child for our Academic Nook back in 2012.

For those who were born and have been brought up in the Philippines (it could also be true to Filipino families who have already migrated elsewhere), Bahay Kubo is a classic children’s song – pretty much like Old MacDonald Had A Farm, except slightly different. I remember growing up knowing the song, but not really understanding what any of the words actually meant: for example, I had no idea what kundol meant as a child – probably because I hated vegetables back then. 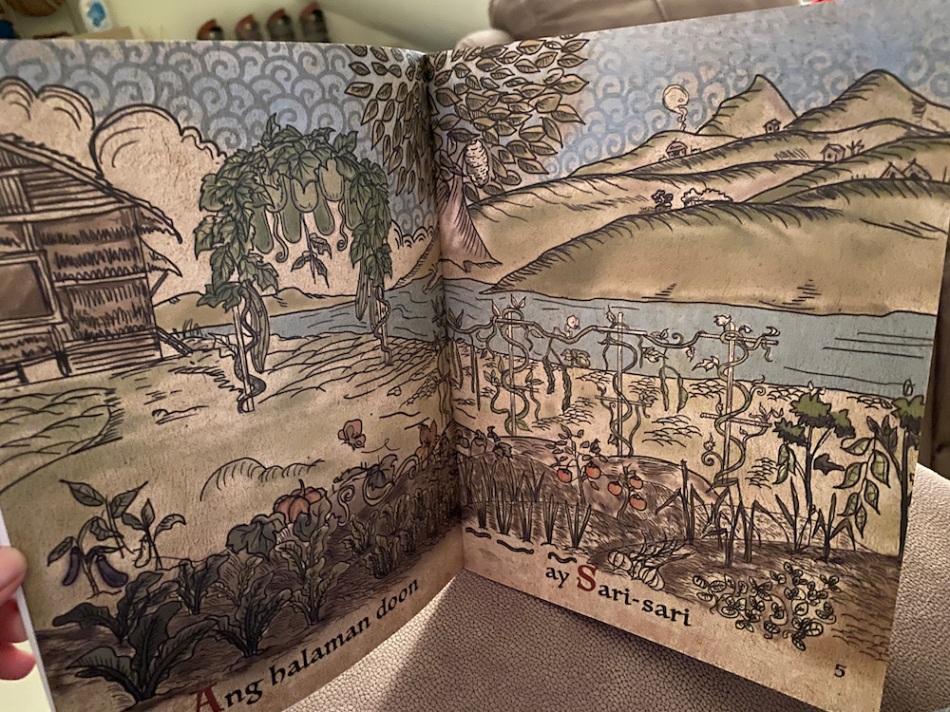 Thus, the entire book is really an illuminated version of a familiar children’s song, except that the Afterword Essays written by Acabado and Cordero deconstructed the varied meanings of how the assortment of vegetables surrounding a nipa hut came to be – and how it could also serve as a reflection of the hybridities of Filipinos’ origins.

It would have been great if there was a brief introduction in the beginning, providing some background information or context of what Bahay Kubo is, probably a note on the origins of the song (even the fact that the author is believed to be unknown and why that could be the case), or even just the musical notes for the entire song itself. While the art and design didn’t really work for me all that much (this could be a matter of personal preference), the strength of this little book is in the Afterword Essays written by Stephen Acabado and Kristian Cordero. I am highlighting here one of my favourite quotes from Professor Acabado’s essay:

The concept of being Filipino, indeed, is represented by the Bahay Kubo: We have come from different corners of the globe. We have come from peoples who braved to cross the high mountains and vast oceans. Therefore, the idea of the pure Filipino, discovered and civilized only by the Western colonizers, must now be laid to rest. Instead, we should embrace that our identities like the mga halaman in the munting bahay kubo are results of long history of living interactions, resulting to a sari-sari, a layered and diverse cultural groups of people who continue to evolve, enrich, and emancipate.