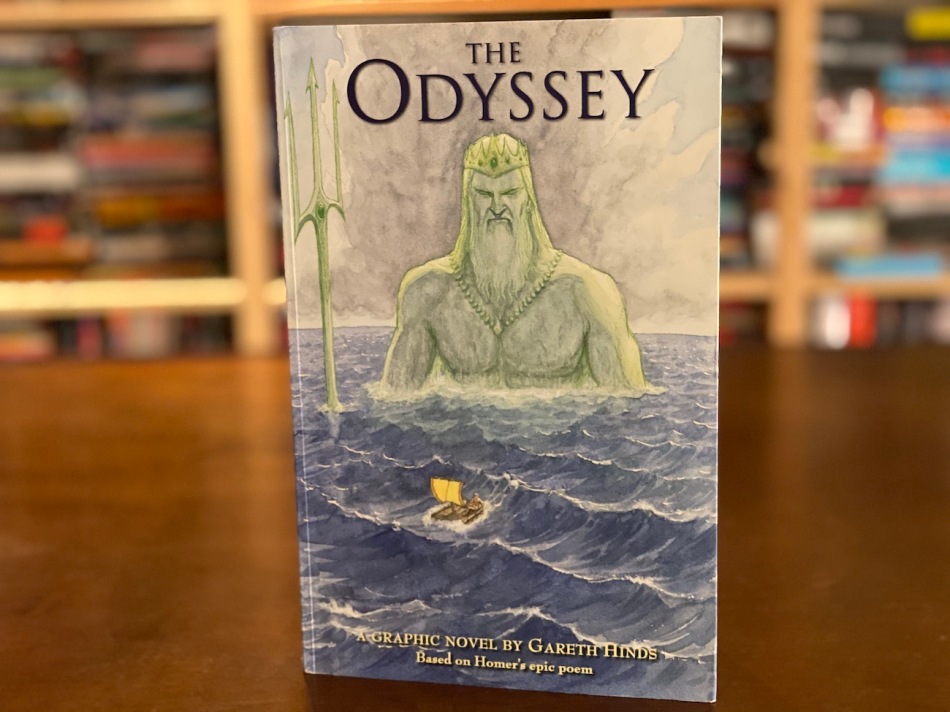 My teenage daughter and I have just finished reading Hinds’s graphic novel adaptation of The Iliad which I featured here. I was pleasantly surprised to find out that The Odyssey is essentially a story of what happened after The Trojan War. I have always associated it with something that happened before the epic battle waged for the face that launched a thousand ships.

It turns out that Odysseus had offended the gods. Thus, instead of heading directly home to his home, Ithaca, after the Trojan War, he was stranded in a number of islands, taking him years to finally find his way home. I like the image above, since the reader gets to see Old Nestor once more (and a few other notable characters from the Iliad) – but this time, as seen through Odysseus’s

son, Telemachus’s eyes. It is a testament to how beloved Odysseus is by his former comrades that they welcomed Telemachus in their islands, and tried to take care of him the best way they could.

The vision of the pining Penelope, wife of Odysseus, has always been the icon for the faithful wife, eagerly awaiting her husband’s homecoming, after years of adventure and perilous journeys. Penelope is not without her suitors vying for her attention and affection – but more likely than not, rulership of her kingdom, Ithaca. A queen left on her own is depicted to be prey to vultures. Cunning and wily as she was, she told her suitors that once the burial shroud that she is weaving for her father-in-law, Laertes, is completed, she would choose from among them. Every night, she would painstakingly undo all that she has woven from that day – ensuring that she never finishes the shroud. Meanwhile, Odysseus hooks up, albeit supposedly-unwillingly with nymphs left to right: from Calypso in Ogygia to Circe in another island. This is of great interest to me since I have read Madeline Miller’s Circe (see my review here), which my daughter and I plan to read immediately after this graphic novel.

The interesting thing about this story is how women were portrayed as either seducers – sirens, nymphs who waylay travelers, effectively preventing them from going back home – or martyrs. Those who were perceived as disloyal were unceremoniously put to death, similar to Penelope’s maids, upon Odysseus’s return. There seems to be an inevitability to men’s waywardness – almost taken for granted as a given. Naturally, there are different standards expected from women – after all, maternity is a matter of fact, paternity a matter of debate. This of course, does not make it any less reprehensible. While I look forward to re-reading Circe (Amazon | Book Depository), I am also intrigued by Margaret Atwood’s Penelopiad (Amazon | Book Depository) – said to be a retelling of this same story, from Penelope’s voice. I wonder how that one is reimagined. Needless to say, I am enamoured by these Greek legends.