I fell in love with the story of the Trojan War and The Iliad when I read the feminist versions of Madeline Miller and Pat Barker for our #WomenReadWomen2019 theme. With the lockdown, I have decided to introduce said stories to my 18 year old daughter. I thought it would be good to first read the original version, as reimagined in graphic novel format by the unparalleled Gareth Hinds.

These stories can prove to be too overwhelming and confusing with all the unfamiliar names – and set in such a very different historical timeline. Thank heavens for graphic novel adaptations such as this one. I believe Hinds is a veritable genius when it comes to portraying scale (see image above), scope, and complexity of narratives made even more alive with his evocative art.

The foibles of men, the pettiness of war, the betrayals that cut to the heart – alongside men’s larger-than-life victories and god-like, super-human strengths are vividly portrayed here. The role of the gods and goddesses as they coyly play with men’s lives, treating them as pawns to alleviate their boredom as immortal beings, is likewise infuriatingly depicted. 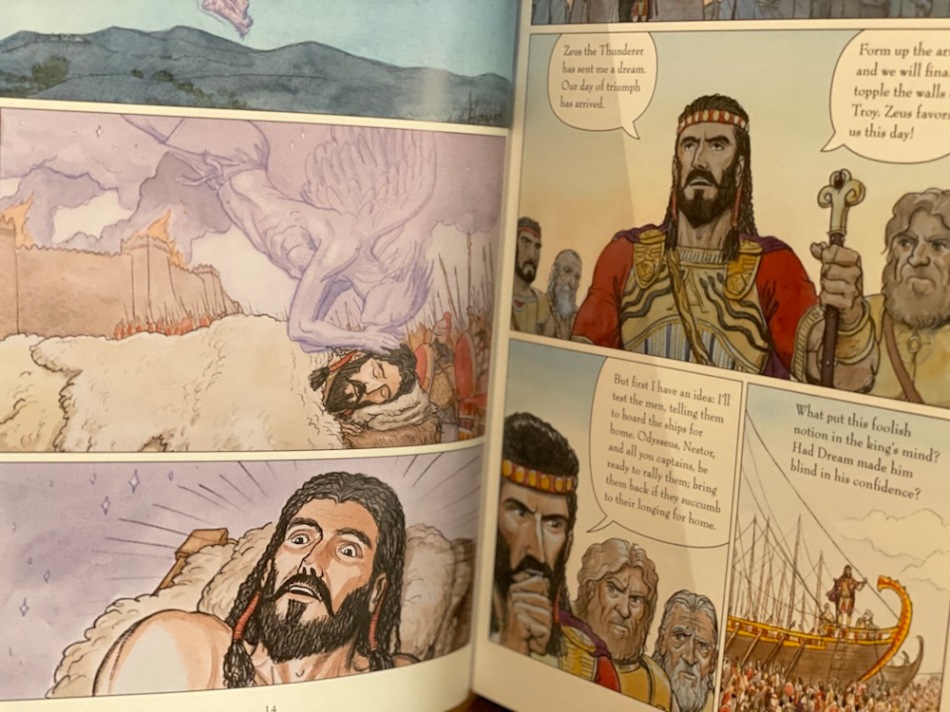 We finished reading this book in a week or so. Just like me, my daughter was annoyed by Agamemnon. We gravitated towards Hector, Troy’s champion – and his wife, minor a character she may be. We also felt for Patroclus and his well-meaning intentions. The scene between Achilles and Priam would be etched forever in our consciousness, too:

This is an excellent primer to the story of Troy – although, I was disappointed to see that it did not include any reference to the trojan horse, how Achilles died, and how the war ended. There is a detailed Afterword, however, which explains what transpired after Hector’s death. This was a perfect introduction to this male-centric world, and a great overture to our read-aloud of Madeline Miller’s The Song Of Achilles (Amazon | Book Depository), which my daughter and I are enjoying tremendously. We are ready to tackle Pat Barker’s The Silence Of The Girls, to be followed by Hinds’ The Odyssey, and Miller’s Circe.