For my Monday reading a few days back, I shared a new series on bears and literacy / numeracy, I thought it would be good to follow it through with this deceptively-simple story of a book within a book, and yes, it also features a bear!

Bearnard just received an important missive from no less than the Queen of Storybook Land herself, that he has been selected to be in a book! Naturally, Bearnard felt very honored and excited to be a star in his very own story.

Bearnard, being a bear after my own heart, thought it would be good to study other bears featured in books. This is where the intertextuality part of the narrative kicked in. First, he talked about a bear floating away in an umbrella – a story that was largely unfamiliar to me,

but which I realized was in reference to Ingrid & Dieter Schubert’s The Umbrella (Amazon | Book Depository) – see the visual clues above and the cover below: 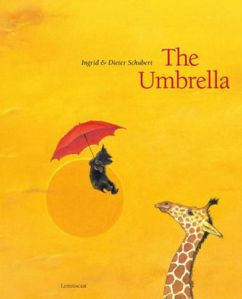 Then Bearnard read about a bear who “ate marmalade and made messes” – the book cover made me recognize Paddington right away: The last one was about a bear whose porridge was stolen – that was easy-peasy of course. The ending of the story which showed exactly what Bearnard’s book is about also introduces a meta-story to the narrative. A thoughtful and knowledgeable adult reader could use this book as a way of exploring other bear-themed-books and to discuss what it means to have a story within a story. The more I think about it, the more I realize just how clever and postmodern this book is – find it and discover more things that I may have missed in Bearnard’s Book.

0 comments on “Of Bears and Books: Meta Story and Intertextuality in “Bearnard’s Book””