If there was one book that fits our current reading theme to a T and also our #ReadIntl2020 (our intention this year is to read more international literature, see here for my progress), it would be this book, birthed in the mind of Polish fantasist Andrzej Sapkowski.

The first time I learned of this fantasy series was around two to three years back through Litsy. I recall seeing all the books laid out in such a luscious photograph, that I vowed to purchase them as soon as I possibly could. I was pretty fortunate that Pansing, my favourite book distributor in Singapore, carried the title and sent me review copies of the titles that I was missing from the ones I already bought.

However, the entire series had to take a backseat as we featured only women authors last year for our #WomenReadWomen2019 (see here for my round-up page of books featured in 2019). When I could finally read a male author early this year, Andrzej Sapkowski was at the top of my list mainly because I watched the Netflix adaptation of this fantasy series while I was in California with family during the December holidays.

In fact, I brought the first two books of the series with me, because we stayed in the US until 5 January, and I knew that The Last Wish could be my first read in 2020. It did take me some 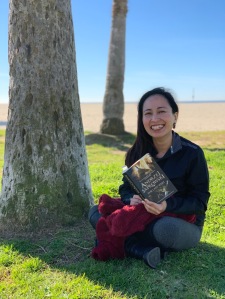 time to get to it, and I have to admit that I enjoyed reading the book more than watching the TV series adaptation, which felt too sexi-fied (is that even a word?) and relatively slow-going for me.

This first book seemed more like a loose collection of story snippets, fragments of Geralt’s journey as a witcher gathered together to introduce this fantastical world to a new set of readers. I felt that watching the TV series helped me to understand some of the story arcs a bit better, even while I also saw some of the changes made in the Netflix adaptation – and I was correct, by the way – it was indeed sexi-fied gratuitously. Not sure if the game is closer to the eroticized graphic Netflix series as opposed to the relatively raunchy, witty, but still comparatively tame original as seen in the novel, but I am betting it is the former.

What I especially enjoyed about the book is its refreshing wit (which made me laugh out loud several times), indicative of how much fun Sapkowski might have had as he was creating this world. Geralt, as can be seen above, is more than just the monosyllabic, emo thug that he was depicted to be in the Netflix series, handsome thug though he may be. There were also subtle references to fear of the foreign, of genocide, of eliminating an entire species for being different from the majority – pretty much the contemporary world, except no magic nor wizards nor good-looking witchers.

While Yennefer was introduced towards the end of the book, it was not as detailed as it had been in the TV series adaptation. There was little mention of Ciri at all in the book, except for the Gift of Surprise and the wedding banquet that was beautifully re-created by Netflix. This has naturally intrigued me and made me want to read the rest of the books in the series.

Needless to say, for all you fantasists out there, this is a book that is not to be missed. Remains to be seen whether the rest of the books will live up to the promise, but I thoroughly enjoyed reading The Last Wish. To convince you even further, here is Henry Cavill reading an excerpt from the book. Enjoy!

#ReadIntl2020 Update: 11 of 30 (country): Poland (Andrzej Sapkowski is from Poland and this book was translated from Polish)