When I read these two picturebooks via my Overdrive NLB subscription, I thought it would be good to pair them both for our current reading theme, as both involve whimsy, witches, and wish-granting. They also both involve two older sisters with younger brothers, and are created by female authors and illustrators of Asian ethnicity. I call this serendipity! 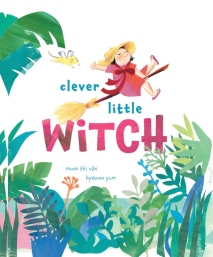 The cleverest little witch on Mai Mai Island, named Little Linh is none-too-pleased with her new younger brother. To say that he annoys her would be an understatement, especially since he rides her broomstick without permission, and chews on her book of powerful spells. 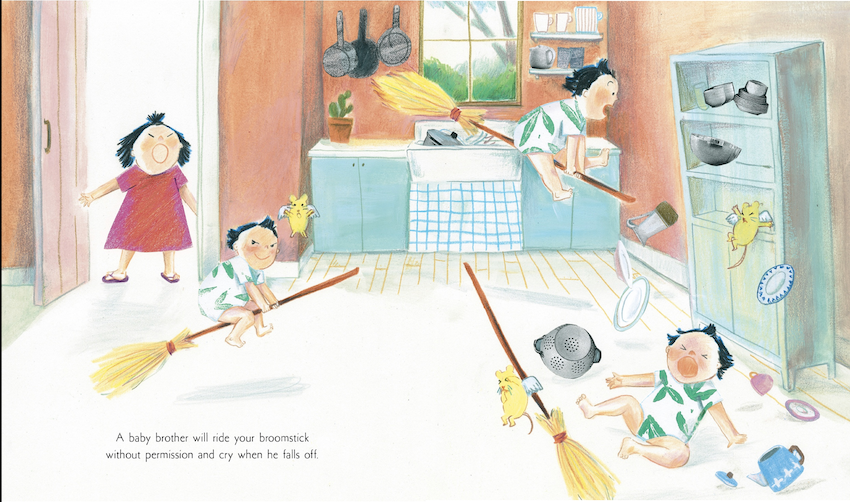 She has pretty much tried everything, including offering her brother to trolls, werewolves, magical creatures, and the forest fairy queen who uses baby’s breath in her potions – but it looks like Little Linh is stuck with her brother for good. 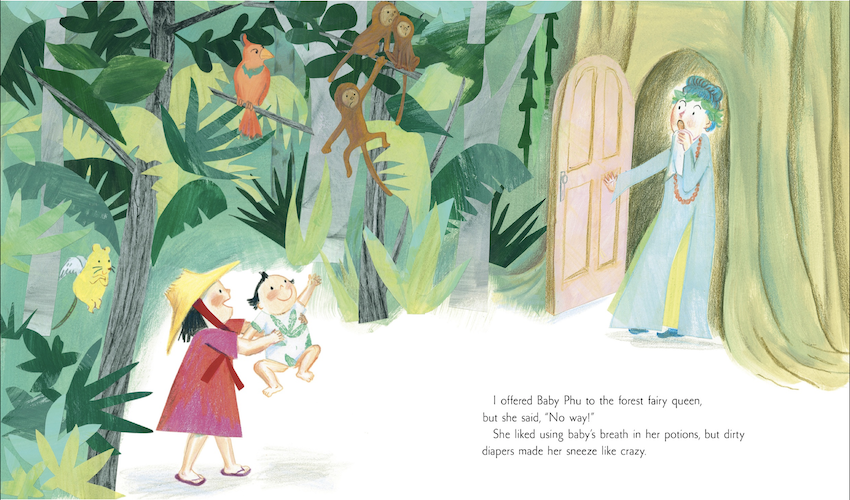 That is, until she realized that she can actually turn her baby brother into a goldfish! Less noise, easier to take care of, and pretty to look at. However, despite her clever ways and her trusty book of spells, all her incantations seem to backfire!

Her brother has turned into a hopping frog, a barking seal, and a fiery dragon – but not the goldfish that she wanted. How the story ends, I shall leave for you to discover. Perfect for kids who are adjusting to a new sibling – or those who simply like casting spells and turning irritating humans into quiet, sedate animals. 🙂

The young girl Roxie has left her jump rope in the park and asked her younger brother, Lukie to come with her as she gets it back. However, as they reached the clearing, they found a most curious sight: A group of foxes having their tail tangled in a jump rope.

The foxes heard the two children before they saw them. Lukie and Roxie tiptoed out of the shadows and the foxes seemed relieved because they sensed that the kids could teach them how to do jump rope properly. As Roxie helped the foxes out, she noticed that the jump rope they were using was exactly the one she left behind!

However, before she could claim it as hers, one of the foxes excitedly told them that she found the jump rope and was now hers, as it has her name on it: Roxie! She said that it was a wish come true for her!

The premise of the book was deceptively simple, yet the ending made me sit up and take better notice. It reminded me of Oliver Jeffers’ This Moose Belongs To Me (see my review here) and also has resonances of Adrian Simcox Does Not Have A Horse by Marcy Campbell and Corinna Luyken (see Fats’ review here). There is a subtlety to this story that was as sweet as it was disarming. This will make for a lovely read-aloud to young children.

42 (out of target 25): Japan (Kimiko Aman and Komako Sakai are both from Japan)