The first two novels highlight modern American marriages and how they gradually unravel: one over the course of a road trip, the other by virtue of an unexpected separation that has torn an already-shaky marriage asunder. The last one highlights a marital breakdown in London of “ordinary people.” I feel that they still fit our ‘reinventing womanity’ theme as both novels depict women as strong-willed beings who are able to exercise this capacity to make their own life-choices. The female protagonists are shown to be flawed beings but with a sense of self-agency. 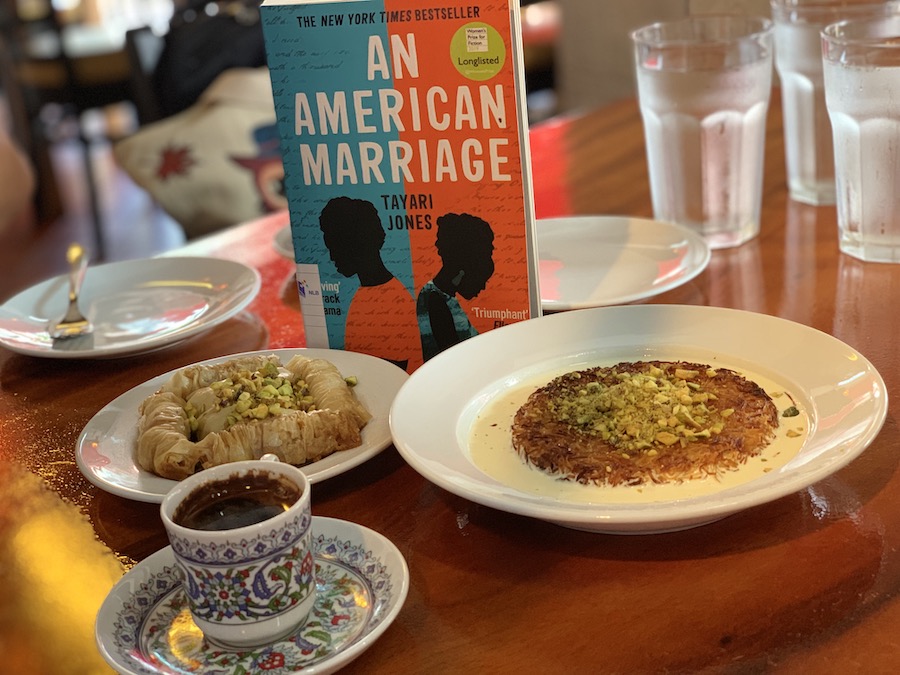 Told in three different voices, the story is essentially a love triangle. Girl (Celestial) has grown up with a boy bestfriend (Andrew) who is crazy about her but she chooses to marry bestfriend’s male friend (Roy) who was wrongfully incarcerated a year and a half into the marriage, leaving girl vulnerable, turns to bestfriend for comfort, and becomes engaged with him, even while being married to imprisoned husband. That is the gist of it.

However, there is the African American experience thrown into the mix: the narrative of privilege and its various permutations; of being mistaken for a drug dealer or a rapist even when you are a ‘hyper-educated,’ cosmopolitan, up-and-coming Black man; and what it’s like being a wealthy Black woman with choices.

While I read the novel in less than a week, I did not connect with any of the characters, finding them feckless, the drama overwrought, the sense of entitlement – or sense of persecution, whichever the case may be – elaborately explained to death. I also could not get past the utter self-absorption of each of the three main characters – whose narrative voices by the way are indistinguishable from each other. I had to check repeatedly whose POV it was since I did not find their voices to be sufficiently distinct.

That being said, it was a thoroughly engaging read, the sense of injustice palpable, the brokenness of Roy and Celestial’s attempts at self-sacrifice and magnanimity in the end (which naturally didn’t work as it is grounded on pity and a sense of obligation) heartfelt. I suspect this will make for a good soap opera, or a TV-series with good looking actors playing the role. I also found the quote below to be quite powerful. One of the unforgettable lines from the book that spoke to me at a time when I needed to hear it: Similar to An American Marriage, this story also speaks about the unraveling of an American marriage (over the course of a long road trip), but one that is done more introspectively, and more cinematically executed. The separation is extended but with perfectly calibrated spaces, permitting the reader to come in, inhabit their lived realities, and make their own conclusions. While An American Marriage may have won the major awards, this book spoke to me more deeply, the literary craftsmanship one that I especially admired. The narrative is also broken down in two voices: the mother’s (first and final part) and her step son’s (second part). Here, the voices are clearly recognizable as belonging to either one or the other, the storytelling slow-going, but sure-footed and clear.

I especially appreciated how erudite the novel is without necessarily sounding off as pretentious or put-on. Maybe because the vulnerability is palpably felt, the keening sense of injustice raw, the sense of being unmoored and being caught in between spaces (not to mention, culture) jarring and true. The family here is one that is considered the epitome of the ‘modern’ progressive family. A mother and daughter conjoined with a father and his son, resulting in their own unique family lexicon, pronouns, hybrid unions. I especially appreciated how both mother and father treated the children with respect, with a sensitive awareness of their needs, and a recognition of their intelligence:

Yet, there is also a letting-go that is painful yet done with grace and courage:

There were also specific quotes that spoke to me deeply, especially as they surface the significance of stories, having them permeate one’s consciousness, allowing the reader to make sense of their own realities and reinvent a new way of dealing.

… and here is another one, which I found to be especially powerful. Throughout the novel, there is a sense of impending doom, an inevitability that one wishes to avoid at all costs, yet seeming to roll over one’s existence, despite the half-hearted attempts to postpone its arrival.

Admittedly, I found the second half of the novel too stream-of-consciousness-y. I felt that the author was hard-pressed to provide a more obvious conflict to drive the plot forward, like a concession or a compromise that she needed to do with the editor or the publisher to present something that clearly needed resolution. Yet, I found it superfluous and tore apart the story in a needlessly-fragmented way, but was still thoughtfully and cleverly executed, regardless. While the struggle, the journey, the driftlessness and despair seem to hold the narrative together, there is also a sense of hope, a coming together despite everything, a core that is solid and grounded and beautiful:

This is a beautiful story. I wish it had received more recognition than it did.

By the time that I got to this third book, I was frankly a little desensitized reading about the many failed marriages of young couples, the ordinariness of heterosexual couples struggling with finding (or maintaining) their personal sense of happiness, the tedium of togetherness – that my appreciation of the book, which I am sure would be enlightening to others, has been severely diminished. That is not to say that the book is not an engaging read, because it is – despite the first few sections which I found to be long-winded and meandering; not to mention the supernatural element incongruously thrown into the mix that I found to be  unsettling and somewhat out-of-place, like an unknown thing dropped into the middle of the narrative, and the author really didn’t know what to do with it, but just went with it nonetheless. The quote above is what holds the story together: the notion that there is another, more exciting life that they could have lived, if not for the entrapment of their marriage. The fact that the two couples highlighted in the story are also Jamaican, Nigerian, Caribbean but of British nationality also added a different twist to the story: the sense of danger in the neighbourhood, the need to be among brown-skinned people, the shared community that is felt from beneath the skin requiring neither explanation nor articulation. 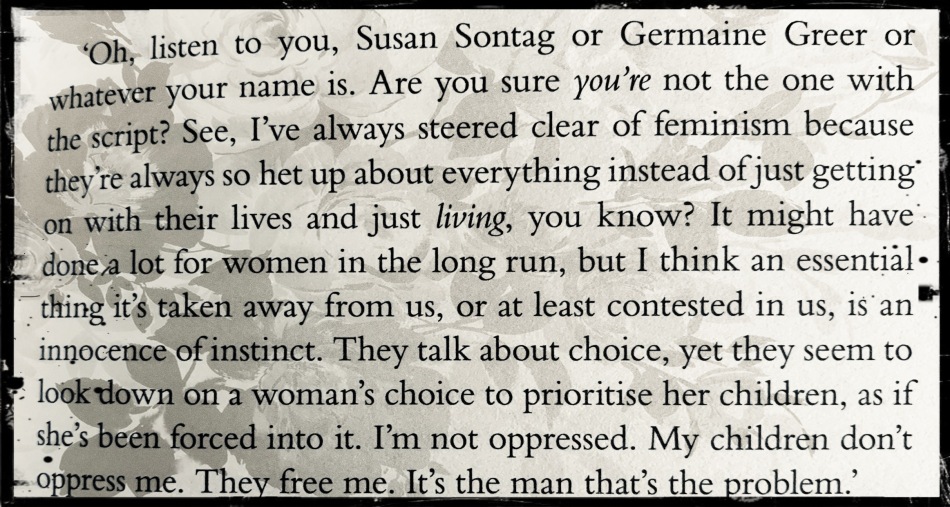 I also found the sections on feminism and establishing a sense of distinct identity among the female characters to be quite interesting, although nothing terribly new, truth be told. However, its truth and the need to untangle what constitutes I versus we would undoubtedly resonate with young women eager to define their evolving roles and the boundaries between the self and the self-as-part-of-a-couple, not to mention the complexities and expectations of motherhood in modern, contemporary society. 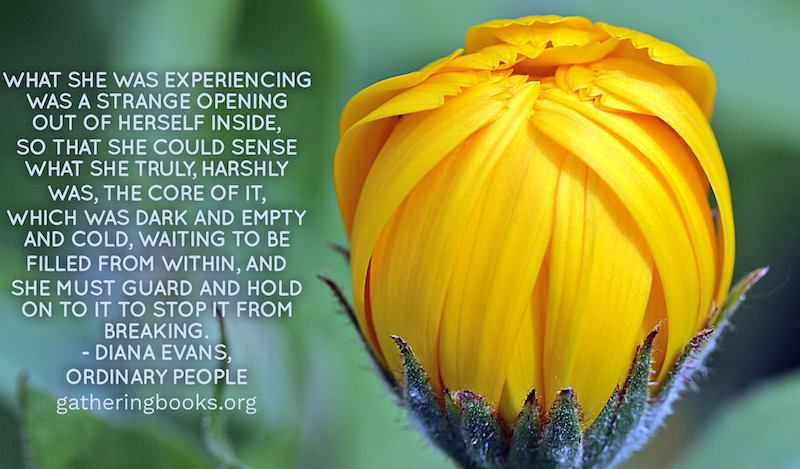 I suppose it also did not help that I could not connect empathically with any of the characters in the story; they were all flawed ordinary people with very little redemptive qualities. Regardless, I do believe it is still worth the read.