I really am enjoying finding quite a number of middle grade graphic novels that feature female friendships. Here are a few recently published ones.

I have only read Noelle Stevenson’s first Lumberjanes and found it to be refreshingly witty and entertaining. A group of girl scouts – oops… hardcore lady types is the term they prefer – getting into hijinks while out camping and thus, saving the world, would always have a place in my heart. However, we only have a few of the books in the comic series in our library, and most of them are not in order (ugh). Hence, it has taken me quite awhile to read the rest of the books in the series. For our current reading theme, I decided to forgo the sequential aspect of it, and just borrow whatever I could find to be featured for our sisterhood reading theme.

I really enjoyed the first part of the book when the girls were all gathered together in a campfire, roasting marshmallows, and telling each other ghost stories – and being pretty blunt with each other if they didn’t enjoy the plot twist or if the story flat out didn’t make sense.

As per usual, the girls get into unexpected adventures involving a ball-istic type of ballroom dancing, fondant-making, scrapbook-making, and getting into a portal to Dinotopia with a bear-turning-hag (who apparently used to be a Lumberjanes Camp Director), among others.

I like how the stories alternated between Mal and Molly who were out on a date – err.. picnic was the term used – and the rest of the girls who were deadly-determined to get a badge, even if it kills them. I didn’t realize cake-decoration could be so competitive:

The Molly and Mal story arc seemed a bit too out there for me – although it still seemed fun and something that most middle grade readers would probably appreciate: 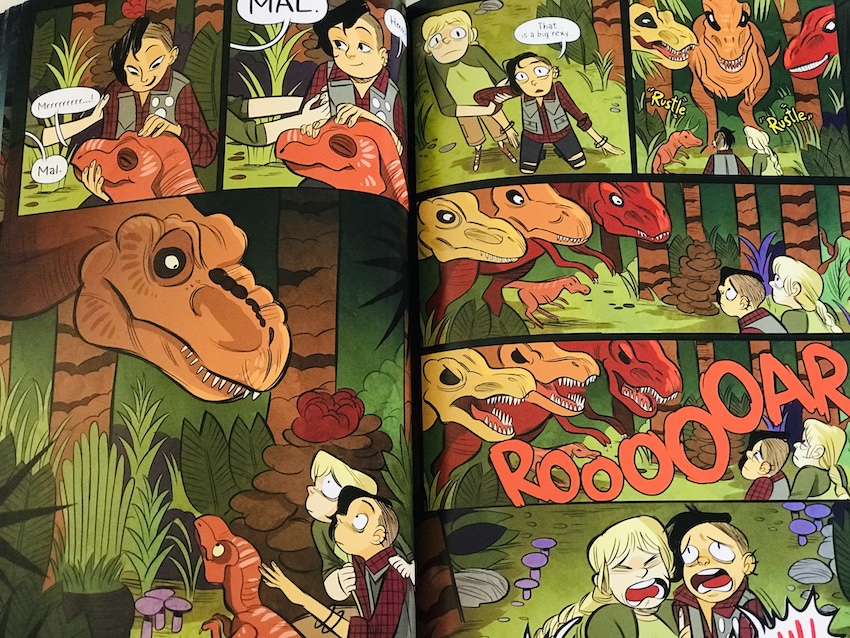 I was slightly jarred by the stylistic changes from one story to the next, although the variations are relatively subtle. However, it took me out of the story a fair bit. Regardless, this is still a quick, fairly-interesting and humorous read that features young girls who are out fighting dinosaurs, decorating cakes, and having fun while in camp. 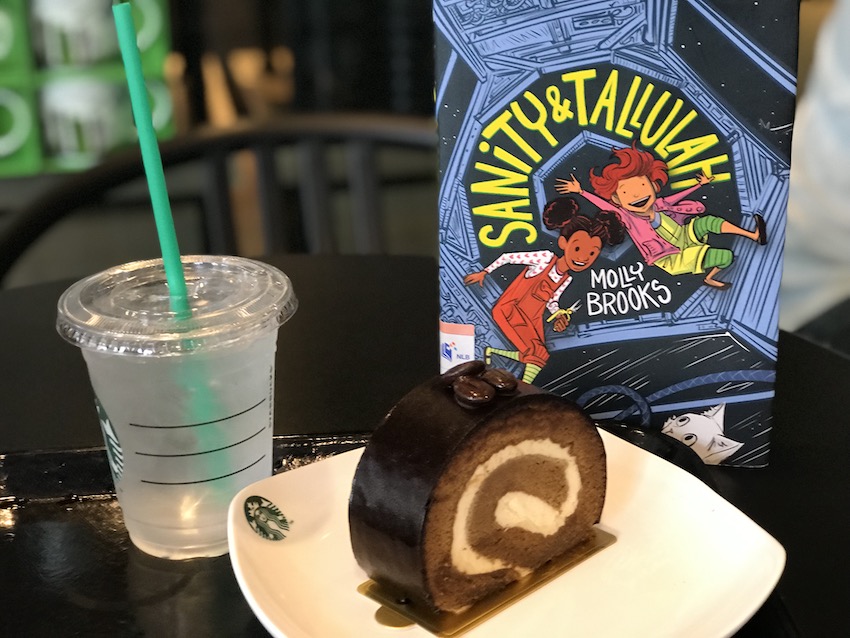 I don’t think I have ever come across a middle grade graphic novel that has a clear scifi bent, with two best girlfriends as the main protagonists who are very clearly geeks and are deeply into Star Trek type of TV shows, are young mad scientists, and live in a space station right smack at the galaxy’s end. 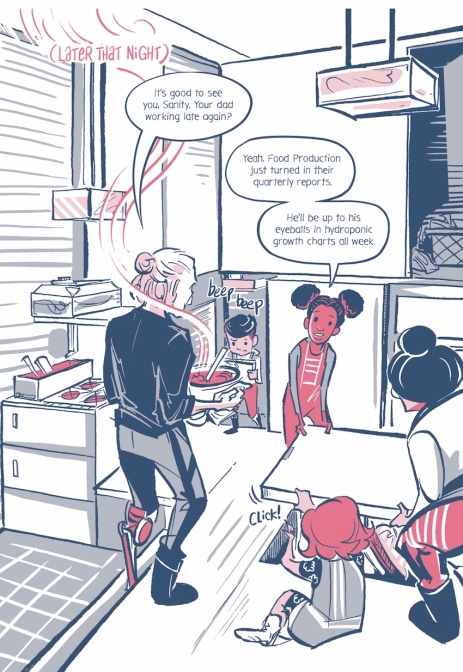 I enjoyed how the diversity aspect is taken as a matter of course, instead of being played out as a main part of the narrative. That being said, it is worth noting that Sanity Jones is clearly an African-American girl, downright brilliant, so smart in fact that she managed to artificially create a cute, furry, three-headed creature – otherwise known as Princess Sparkle and Destroyer of Worlds.

Then there is also Tallulah’s father who has a mechanical leg, gloriously long-haired, and he cooks, too! I like his relationship with Tallulah’s brother, and the way that he actively tries to be a part of his children’s orbits. 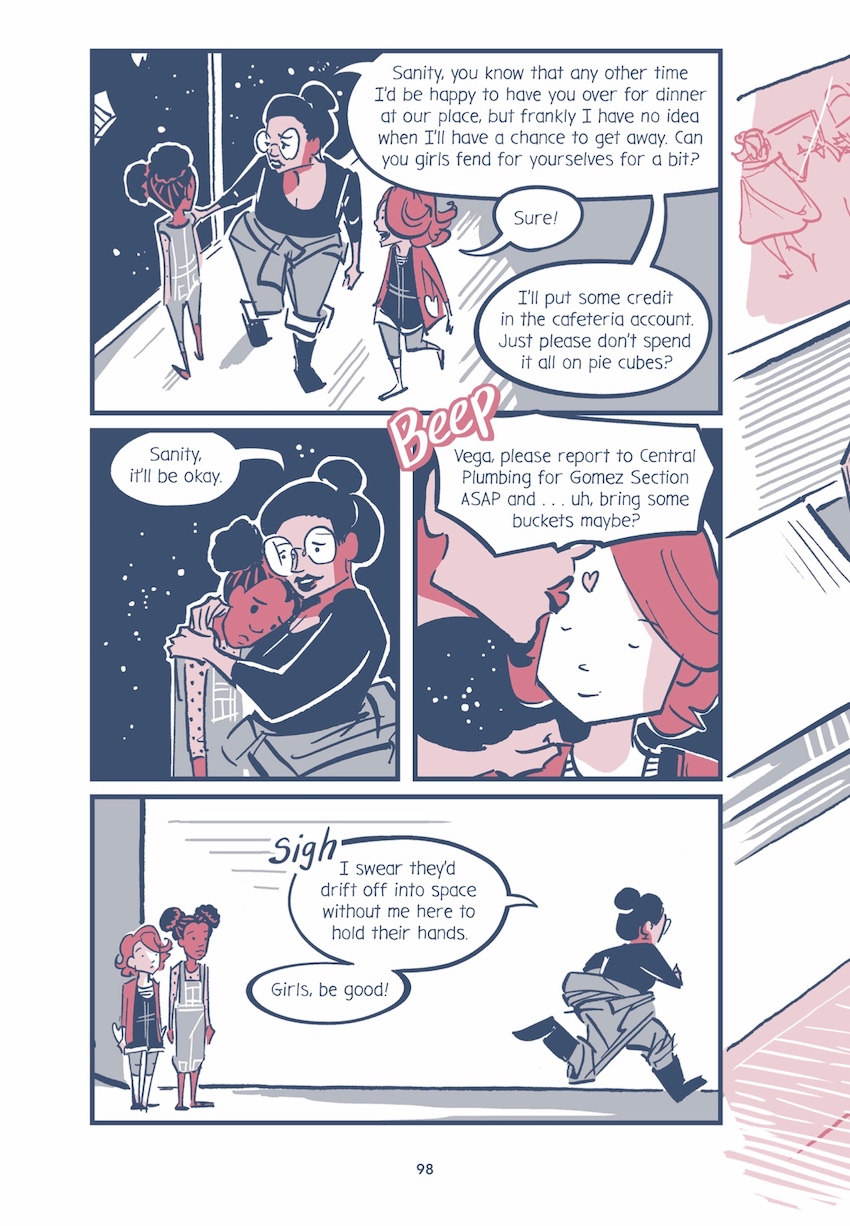 However, one of my favourite characters here is Dr. Vega, Tallulah’s mother who vacillates between exasperation and compassion towards these two nerdlings who seem to naturally gravitate towards trouble – that they are able to impressively fix on their own. Things become chaotic in this space station when Princess Sparkle and Destroyer Of Worlds escaped from its hatch – wreaking havoc, causing fires and sudden blackouts. 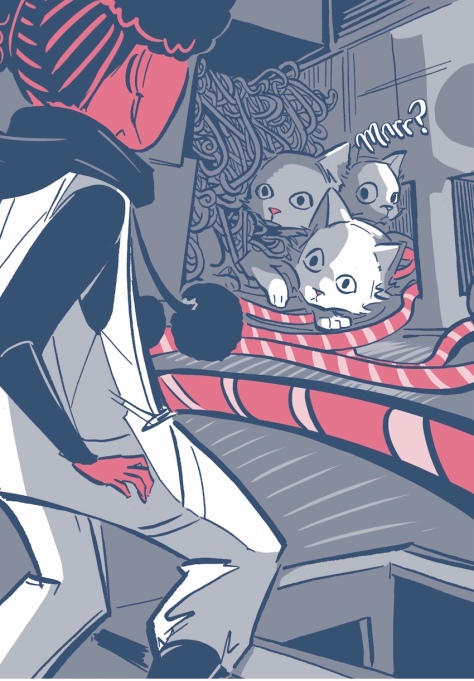 Initially, I had a hard time getting into the rhythm of the story – but it has its own distinct charm, its very own signature that I have not found in other middle grade graphic novels. The narrative does not talk down to kids, but simply assumes that they can follow the scientific research bits, and understand Sanity’s very logical and highly empirical train of thought. This is a definite must-have in anyone’s library.