These three novels surface women’s voices that have long been ignored or taken for granted. Written by outstanding female authors, these stories re-imagine mythology as viewed by one of the vanquished women regarded as commodity – or how women in an actual colony may have come together in sisterhood to address an endemic and heinous problem that threatened their very existence.

This story is Miriam Toews’ imagined response to actual heinous crimes perpetrated against women that transpired sometime between 2005 and 2009 in the Manitoba colony, a group of Mennonites in Bolivia (see here for BBC news of said crime and the men who were convicted of serial rape). The women in the colony were drugged with an animal tranquilizer and woke up bruised, bloody, beaten – with some impregnated by those ghostly attacks in the night. The women were accused of (1) making up stories, or (2) punished by God or Satan for some misdemeanour – hence, they deserve to endure the constant violation of these phantom perpetrators.

Miriam Toews wrote this novel to get into the skin and the minds of these violated women – perhaps as a way of making sense of their capacity to endure, the torment  they must have gone through, as well as get into the psyche of what makes one remain despite the indignity, abuse, and the total disregard for humanity. Apparently the youngest girl raped in the actual colony is nine years old; but here in Toews’ vision, the youngest child was three. One can argue that regardless of the survivors’ age, the acts are unconscionable, savage, and unthinkable. Yet, what truly is remarkable is the power of gaslighting that strips whatever remaining will or volition that the women in this colony may have had.

This was a difficult read for a variety of reasons: the foremost of which would be the heaviness of the theme; secondly, the voice used in the narrative. Spoken from the perspective of the man who is documenting the women’s meeting, it was an interesting ploy to witness the dialogue among the women play out as portrayed by a man-who-is-not-a-man; someone who is deemed hopeless in the usual manly tasks such as farming or hunting, and who is only good for teaching, reading, and writing – not valued skills, apparently in this colony. The language was equally heavy, pedantic, laced with religion and rituals and niceties. There is a treatise-like vibe to the narration that may not necessarily appeal to most who may wish for a more contemporary approach. Yet, I felt that as difficult it may be for the reader to slip into the characters’ tongues, it was essential and in keeping with the actual thread of the story. Third, it was exhausting reading the women’s arguments as to whether they should do nothing, remain in their colony and fight, or leave. The decision is naturally interwoven into their religious beliefs and should be in consonance with everything that they stand for and believe in; otherwise, what was the point of enduring those years of abuse? Arriving at a collective decision was like pulling teeth: a lot of hair-tearing, and not just one’s own but others too, on occasion – metaphorically speaking; a great deal of insult-throwing; and there were the frequent fits that had to be handled with prayer, singing, chanting, and temporary truce. Then the cycle begins all over again. 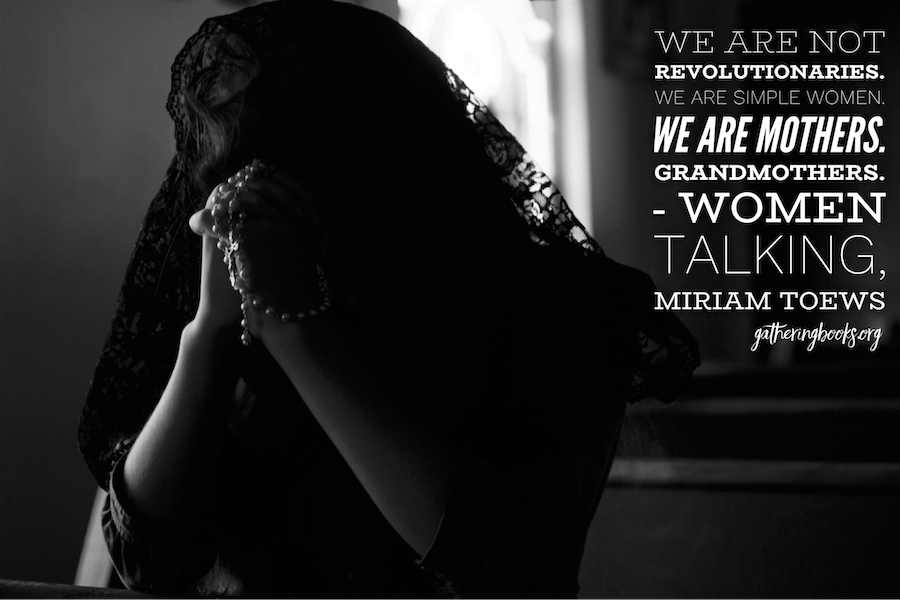 I stayed with this novel because I truly want to immerse myself, no matter how unpleasant, into the consciousness of women who can justify misogyny, who can endure male violence, and are able to rationalize abuse. Yet, I also wanted to witness women coming together, wrestling with a hard-won decision and ultimately embracing their womanity, even at the expense of their entire colony falling apart. For more information about the author, here is a New York Times’ Profile of Miriam Toews and her coming to grips with her Mennonite conscience. 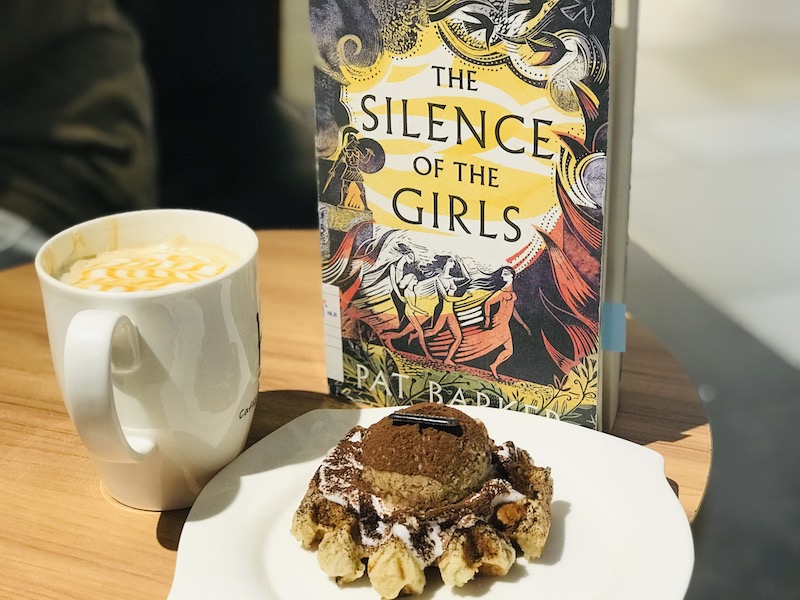 The Silence Of The Girls

This retelling of the Trojan War – the story of Achilles, Agamemnon, Helen of Troy and Paris, King Priam – is written and perceived from the lenses of a vanquished Greek Queen, Briseis. Too often, war accounts are narrated from the perspective of the conqueror. Here, the silence of the girls is shattered, allowing the reader a heartbreaking glimpse into helplessness, impotent rage, and the inevitable resignation of women forced to become the concubines of war victors. The entire story places the reader at the very heart of the battle: cities burning, villages pillaged and looted, women raped. 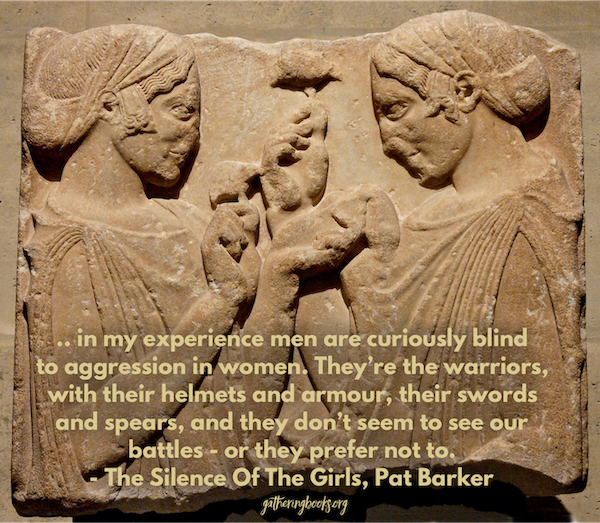 This was the first time that I have truly seen Briseis – although Barker’s vision did not allow for any detailed description of her physical appearance: it seemed almost irrelevant, although one can argue that it may be at the heart of the fallout between Agamemnon and Achilles. It was Briseis’ inner turmoil, her seething anger and despair that left resounding echoes in my mind, making this an unforgettable read. I have known of Achilles since I was young, but not so much the ordinary mortal women whose destinies were tied to men or gods either triumphing in victory or losing hopelessly in battles of their own making.

The narrative was tightly woven, the pacing and its build-up masterful. As a reader, I vacillated between loathing Achilles or feeling utter disdain towards his obliviousness, despite his evident cunning and surprising capacity for thoughtfulness. Yet despite the warriors’ occasional acts of compassion and sporadic overtures of friendship – I am thinking mostly of Patroclus here and his remarkable kindness and generosity of spirit – the women here were little more than chattel – to be traded, exchanged, gifted, fought over, won – even Helen of Troy, or should I say, especially Helen of Troy.

Yet despite Briseis’ singularity and the fact that her pain is hers alone, there was that connectedness among the vanquished women, a collective grief that is brewed in a churning soup laced with bitterness and fear and wretchedness. Yet, they also do not begrudge each others’ pockets of freedom and deliverance:

What is probably most poignant for me was the final scene and Briseis’ choice of whether to leave or stay – despite her being fully cognizant of the fact that not much of a choice is truly afforded her. It was rather a pragmatic decision that simply borders on the lesser evil.

Throughout the story, it was Briseis’ voice that surfaced, no annoying author intrusion to disrupt the flow of narrative, just a channeling and owning of grief that is stark but never overly-dramatized nor gratuitously violent. It was very matter-of-fact, sharp, incisive – and pierces a woman’s spirit in a way that leaves a scar.

We’re going to survive – our songs, our stories. They’ll never be able to forget us. Decades after the last man who fought at Troy is dead, their sons will remember the songs their Trojan mothers sang to them. We’ll be in their dreams – and in their worst nightmares too.

I was left reeling at the utter injustice, the casual disregard for women and their will, and the total lack of volition among the captured women going through the motions of survival and mere existence. This was such an unforgettable read that I made an emergency trip to the library to borrow the book below.

The Song Of Achilles

Evidently, I am years late to this book party. When I was gushing to a very good friend about this novel, he told me that he already bought a copy and read it as far back as 2012, and I was shocked that I am only paying attention to this finely-crafted novel now, especially since I read and reviewed Circe a year ago. I do believe, however, that books find us at the perfect time. I also strongly feel that my appreciation of this book was made even fuller by the fact that I read it immediately after Pat Barker’s The Silence Of The Girls.

Told in the voice of Patroclus, Achilles was made more humane and less reprehensible by a fairly unremarkable man, an exiled Prince who is unloved by his own father, a gentle-hearted soul with the most loyal heart. Prior to reading these two novels, the name Patroclus did not even ring a bell for me, but now, his is the name that I will remember and will look for in Greek mythology – although his mortality does not even put him alongside the mightiest of the gods and demi-gods.

Admittedly, there are very few women’s issues that can be discerned in the novel. Briseis was a resigned, undistinguished, perfectly ordinary woman who just happened to be beautiful – a war prize, Achilles’ conquest, and Patroclus’ favourite. Unlike Barker’s characterization, there was neither rage nor anguish here; rather, her fate seemed like a matter-of-course, with the vanquished women making the most of their situation, doing their best to survive in the margins, struggling to remain inconspicuous (ignored is better than noticed and raped), while the bigger narrative of gods, heroes, and warriors play out for the reader’s delectation. 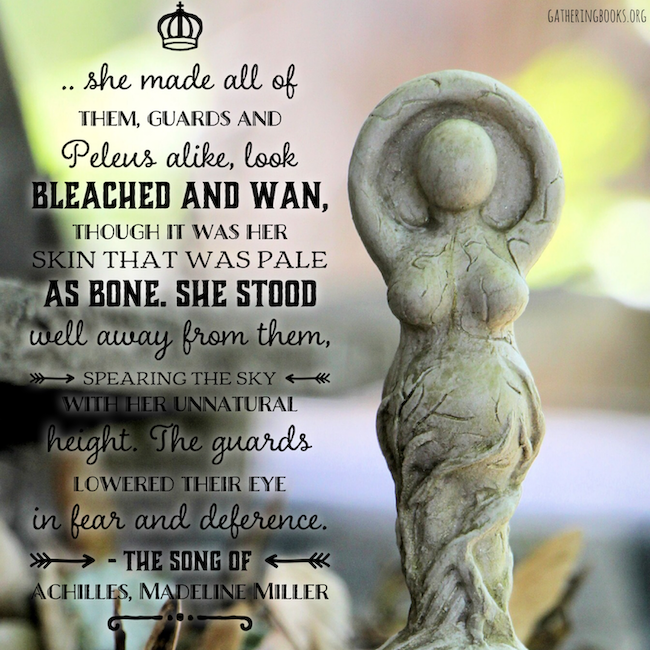 There is, of course, the fierce – almost-feral – goddess-mother: feared and worshipped, despised and adored. She is the embodiment of a mother who will never be truly pleased by a beloved child’s chosen partner; no one will ever be perceived as worthy of a demi-god, after all. And yet, it is Patroclus’ humanity – the very thing that Thetis derides – that has made Achilles the hero that he was. Thetis was portrayed here as demanding, cold, and forbidding; the very traits that made Achilles adore his elusive mother.

There were times when I marveled at Patroclus’ naive expectations, his simplicity, his unwavering faith in Achilles’ goodness. Yet, there is also an awareness and a resigned acceptance of the fact that Achilles is danger personified, that he was born to strike fear into the hearts of his enemies, that every bone in his body sings with the thrill of taking another’s life. 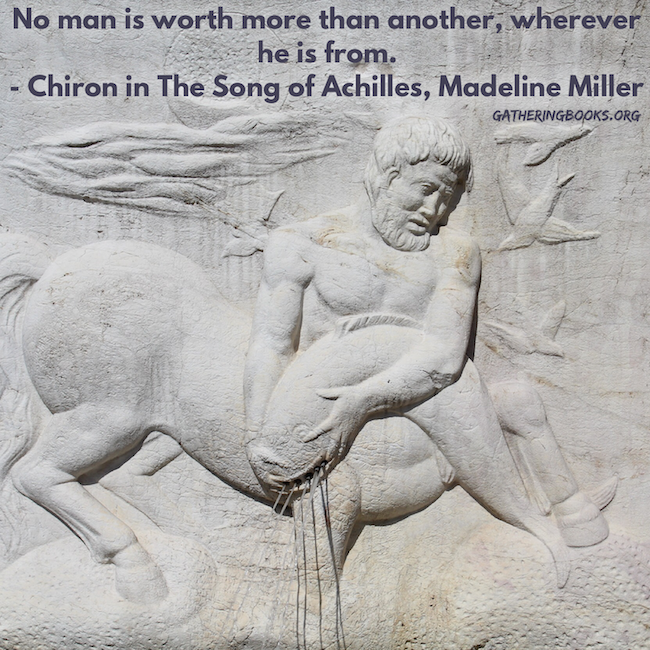 The time that Patroclus and Achilles spent with Chiron was my favourite part in the book. This is what made me squeal aloud in so much delight, and made me hold my hand to my heart. I am deeply moved by Miller’s raw, stark, vulnerable voice – that is never maudlin, trite, and needless-dramatized. I simply did not want the story to end. I prolonged it as much as I could in the hopes of remaining in this world much longer. If you have not read this book yet, find it, and allow it to cast its spell on you.

#WomenReadWomen2019: Miriam Toews is from Canada, Pat Barker is from the United Kingdom, Madeline Miller is from United States Of America.

12 comments on “[Monday Reading] Of Girls’ Silence and Talking Women”