We have already featured the graphic novel adaptation of the Baby-Sitters Club originally written by Ann M. Martin during the past weeks (see my review of Book 1, Books 2 and 3). I am thrilled to share my thoughts yet again for Books 4 and 5, as envisioned by Raina Telgemeier and Gale Galligan respectively.

Adapted and Illustrated by Raina Telgemeier based on the novel by Ann M. Martin
Published by Graphix (2016)
Kindle ASIN: B00VAX81TS. Borrowed from the Jurong West Public Library. Book photos taken by me.

Among all the books in the Baby-Sitters Book Club series, this is perhaps the one that is most apt given our current reading theme on sisterhood and female bonds. Apart from the girlfriends aspect of the club, this book features the relationship between biological sisters Claudia and Janine – and their strong connection with their grandmother, Mimi.

I had to borrow an e-book version of this graphic novel from Overdrive (via our Library) since there is only one physical copy available and it is out for like forever. I am not sure if it is the word mean that may have made this a “red-flag” of sorts among our overly-cautious librarians here in Singapore, but it is really a shame that there is only one physical copy available. It turns out *spoiler alert* that Janine isn’t exactly mean. In fact, she is a brilliant, possibly intellectually gifted older sister who seems largely misunderstood by Claudia who is understandably jealous of Janine’s academic success and feels that Janine would rather spend more time in front of her computer rather than be with family. This is further compounded by the fact that Claudia is struggling academically in school. While Claudia excels in arts – and evidently in baby-sitting, too – her mathematical skills leave much to be desired.

Over and above the usual baby-sitting issues faced along with Kristy, Mary Anne, Stacey, and the new girl, Dawn – this book features more family drama – especially since Claudia and Janine’s grandmother, Mimi, suffered from a stroke. I found the depiction of Mimi to be very truthful and moving – Mimi’s frustration in not being able to communicate as effectively as she wished, the feelings of vulnerability, and how the entire family is struggling amongst themselves to figure out how the family dynamics is changing as a function of the illness also rang true. 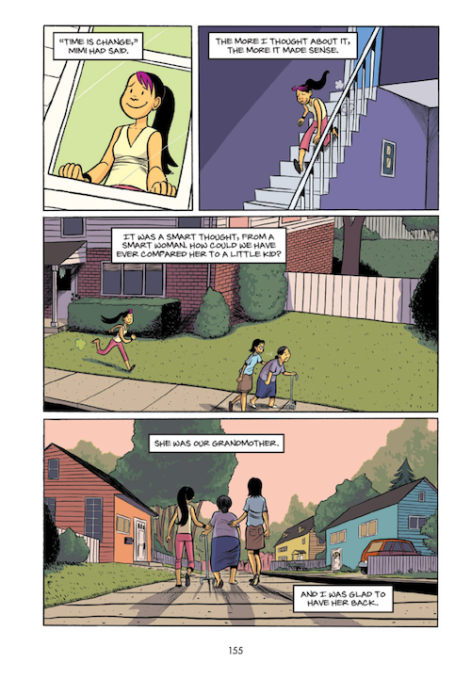 I raced through this graphic novel in a few hours – and found myself moved slightly to tears somewhere in the end. I would predict that these graphic novels will be considered as classics and comfort reads by this generation. Beautifully executed.

The Baby-Sitters Club Book 5: Dawn And The Impossible Three

Book Five focuses on the newest member of The Baby-Sitters Club, Dawn – Mary Anne’s BFF and possibly soon-to-be-stepsister – and the source of Kristy’s jealous angst. It is quite possibly strategic that Gale Galligan has taken over as the ‘new’ graphic novelist while featuring the ‘new’ girl in the series.

While the four girls – Kristy, Claudia, Mary Ann and Stacey – all felt three-dimensional and fully embodied to me – Dawn remained somewhat flat. This may be because all the first four girls had been portrayed alongside their families and their unique issues; whereas Dawn’s was riding alongside Mary Anne’s story arc (given how both their parents are dating, etc).

What was especially illuminating for me here was how Dawn needed to establish boundaries in her role as a baby-sitter. As can be seen in the image above, she also doubles as a housekeeper for the Barretts, given the insane schedule of their divorced mother who is trying to find a job to keep their family of three very young children together. Things become even more complicated with a messy divorce, an irate father and ex-husband, and a case of child abduction. 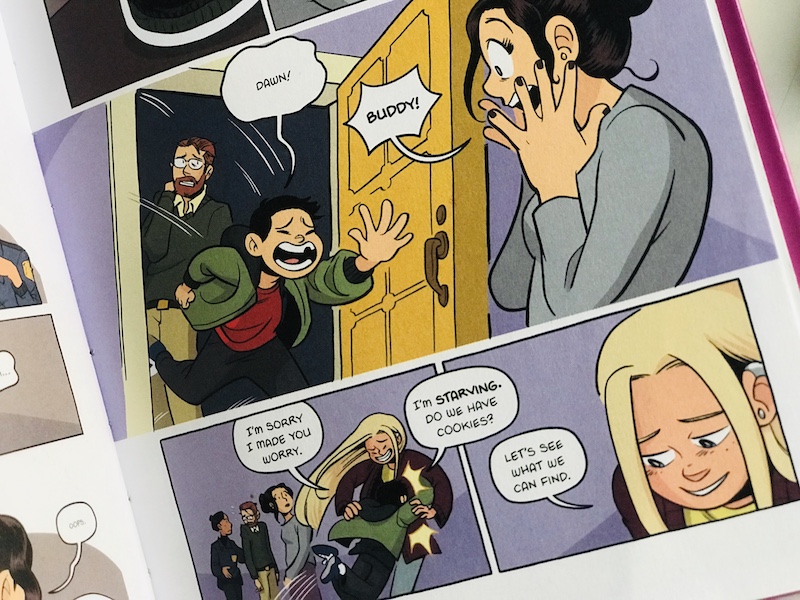 It is actually quite interesting how heavy-going issues are tackled with grace and light-heartedness and gentle humour in these graphic novels. While I never read The Baby-Sitters Club as a teenager, I am now beginning to feel that I may have missed out on a great deal.