Several weeks ago, I borrowed a few middle grade novels that I thought would go well with our theme on Warrior Women. These books focus on social justice and feature mighty and fearless young girls who would fight for freedom and equality.

Betty Before X by Ilyasah Shabazz

“In Detroit in 1945, eleven-year-old Betty’s house doesn’t quite feel like home. She believes her mother loves her, but she can’t shake the feeling that her mother doesn’t want her. Church helps those worries fade, if only for a little while. Speeches from guest activists like Paul Robeson and Thurgood Marshall stir African Americans in Betty’s congregation to stand up for their rights despite widespread racial prejudice…”

Ilyasah Shabazz is the third daughter of Malcolm X and Dr. Betty Shabazz. She is an educator, activist, advocacy worker, motivational speaker, and author of several award-winning publications. Betty Before X tells the story of a young Betty Shabazz, two decades before she met Malcolm X. Most of the characters in this book were based on real people and some of the social situations were based on historical facts. Betty and her friend Suesetta decided to join the Housewives’ League, an organization that supported black-owned businesses. Betty Before X is a coming-of-age story of a young girl who yearned for her mother’s love and also discovered her potential to help her community.

All the Stars Denied by Guadalupe García McCall

“In the heart of the Great Depression, Rancho Las Moras, like everywhere else in Texas, is gripped by the drought of the Dust Bowl, and resentment is building among white farmers against Mexican Americans. All around town, signs go up proclaiming “No Dogs or Mexicans” and “No Mexicans Allowed.” When Estrella organizes a protest agains the treatment of tejanos in their town of Monteseco, Texas, her whole family becomes a target of “repatriation” efforts to send Mexicans “back to Mexico”—whethery they were ever Mexican citizens or not…”

When I picked up this book, I did not realize that this was a companion to the young adult novel, Shame the Stars. García McCall brought to light the mass deportation of Mexican American citizens during one of the bleakest moments in U.S. history. It was heartbreaking to read about the fate of fifteen-year-old Estrella, her mother, and her baby brother who were taken across the border after the law enforcement in Monteseco raided and burned down their home. History repeating itself is a terrifying notion. All the Stars Denied is an important book and it is still relevant today. 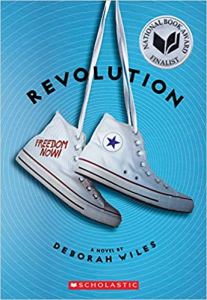 “It’s 1964, and Sunny’s town is being invaded. Or at least that’s what the adults of Greenwood, Mississippi, are saying. All Sunny knows is that people from up north are coming to help people register to vote. They’re calling it Freedom Summer… Things get even trickier when Sunny and her brother are caught sneaking into the local swimming pool—where they bump into a mystery boy whose life is going to become tangled up in theirs…”

Revolution is the second book in the Sixties trilogy by Deborah Wiles. I knew this but completely forgot when I finally started reading the book. The first book is entitled Countdown and the third is Anthem. The main topic of Revolution was about African Americans registering to vote. When Sunny encountered the mysterious colored boy with high-top sneakers in the community pool, her life changed forever. The story is told in the alternating perspectives of Sunny, Ray, and Sunny’s stepbrother Gillette. This book is over 500 pages long, thanks to the hundreds of documentary features scattered throughout the book. The layout was fantastic, the images were powerful, and Deborah Wiles’s writing was compelling.

For additional information, check out these 21 Free Resources for Teaching Social Justice in the Classroom, courtesy of WeAreTeachers.