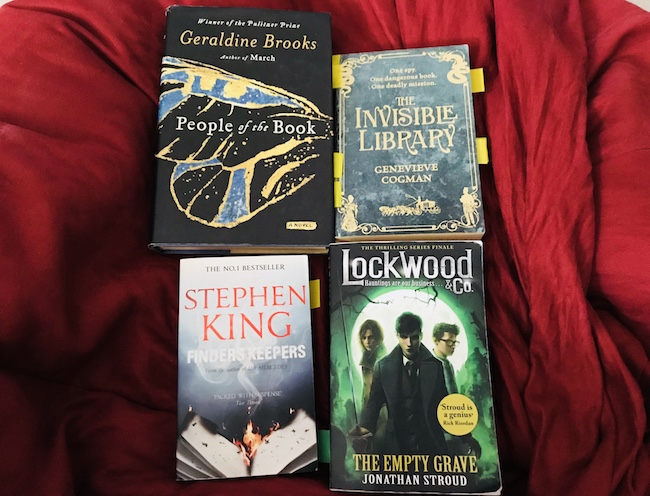 Today is an extra special Monday reading as we are launching our November-December reading theme – Writing Home: Hues Of Diaspora in Literature. We are looking for the following books with these themes:

Hence, you will see here some tangential intersections with regard to book journeys – but largely, today’s theme focuses on manuscript mysteries and the migratory movements of books. 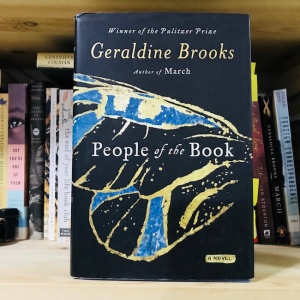 People Of The Book

Among the four novels I am featuring this week, this will be the one that fits our current reading theme the most – except that instead of human beings, it is a precious, rare, singular book that has taken a perilous journey from Spain to Vienna to Sarajevo to Jerusalem. 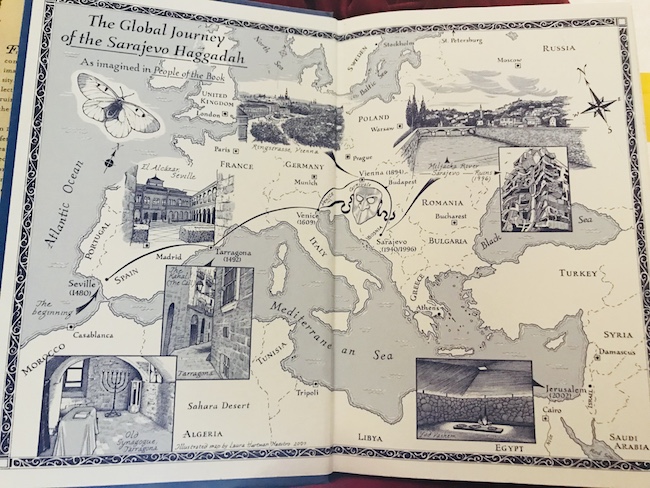 The endpapers pictorially depict “The Global Journey of the Sarajevo Haggadah.” It appears that this book is inspired by the true story of the Jewish holy book, Haggadah, a famously-illuminated codex read aloud by the Jewish people during Passover. The author learned about its disappearance, its incalculable value, and the fact that it was saved by a Muslim librarian from being destroyed during the war:

It was not the first time this Jewish book had been saved by Muslim hands. In 1941, Dervis Korkut, a renowned Islamic scholar, smuggled the manuscript out of the museum under the very nose of a Nazi general, Johann Hans Fortner (later hanged for war crimes), and spirited it away to a mosque in the mountains, where it remained safely hidden till after World War II.

The author went on to note that while this has inspired the seeds of her novel, much of the details have been fictionalized. More than anything, I was amazed by the intricate work of Hanna Heath, an Australian scholar who restores rare manuscripts and uncovers its history and pathways based on the trace evidences left accidentally or purposively on the book: in its spine, the pages, its tears and markings. This is how Hanna describes her work:

As a book collector, I do not own anything that remotely resembles the value of the Haggadah. Yet I was left wondering about the little traces that I leave in the books that I read that signify how it has been handled, held, brought to other cities as a travel companion, bought in some obscure bookstore, cherished and re-read until it is tattered, or even largely ignored by me, its book hunter. Hanna used physical traces from the book such as an insect’s wing, a white hair, wine stains, feathers and a rose, even saltwater to provide her with insights and learned inferences as to how far this book has journeyed to finally find its way back home, wherever it may be. Hence, the narrative alternates back and forth from contemporary period (moving from the late 90s to early 2000 as its basic timeline) to the period that showed the story behind the clues Hanna found, with the author thankfully adopting an omniscient view that permits the reader to know even more than Hanna as to the real events surrounding the Haggadah’s migratory movement from one city to the next. Despite its amazing plot and the masterful way that Brooks skilfully wove a narrative within a larger narrative, I did find it difficult to connect deeply to the characters in the story. There is a clinical detachment to the way the story was told, almost journalistic in its account, that made me, as a reader, feel very much like an outsider, rather than inviting me into the story. Just as you begin caring for one character, the timeline shifts. However, that may also be the author’s intent – to have an audience who will avidly listen to the heroic and dastardly deeds that surrounded the saving of a precious manuscript that is truly unparalleled. I did find this short documentary on Youtube about the real Haggadah that you may wish to view to whet your literary appetite if you haven’t read this novel yet:

This is the first book in a series that features intrepid librarians who move between seemingly parallel universes to retrieve rare copies of books/manuscripts and keep them safe in their in-between universe that seems neither here nor there – just The Invisible Library – keeper of all the books in the world, especially those that seem “endangered” – if books can be considered a species of sorts. This is how the protagonist, Irene, a professional spy-librarian describes this sacred space (I used Typorama for this quote):

Its main objective is to save books in the event that the alternate worlds (where the books come from) lose them. The Invisible Library can then provide them with copies of said books, thus ensuring that the books would remain alive forever, regardless of what happened to the world that produced them. It reminded me just a little bit of V. E. Schwab’s Shades of Magic and the four Londons.

While the premise seems really interesting, I found the execution a bit wanting. For a book that is supposedly riddled with mystery, there was a lot of explaining going on, too much dialogue that revealed plots and plans, and a fair bit of repetitive statements that I felt were unnecessary. Regardless, I was intrigued by the character of Kai, who apparently (spoiler alert) is a dragon? Clearly, there were a lot of loose ends as well in the narrative, ostensibly for the reader to read the next few books in the series, but also ended up making the book seem incomplete with a lot of blank spaces that were not adequately filled. Regardless, it was a fun adventure with librarians who are determined to save books across universes. Thus, I do look forward to still reading the rest of the books in the series. 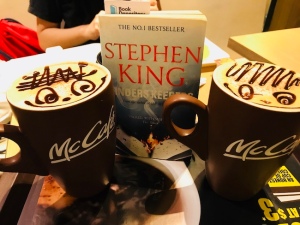 I enjoyed reading Stephen King when I was a college undergraduate – burned through his signature reads such as It, Pet Sematary, The Stand, The Shining, Carrie among others. Then at a certain point, I lost interest too, thinking that he was just way too dark. I am glad, though, to have taken the chance with him again with his Bill Hodges trilogy. Somehow, these later novels of his show a certain kind of quiet depth despite its occasional Stephen-King-shocking undertones. I thoroughly enjoyed the first book in the series: Mr. Mercedes, and my husband and I found the TV series adaptation absolutely riveting.

The casting was stellar, the actors very accomplished and brilliant, the TV adaptation relatively faithful to the original text. After that hangover, I looked at the second book in the series and was pleasantly surprised to discover that it was actually a book about a book – perfect for our previous #metareading theme. I thought I could still squeeze this here given the migratory movement of the books from one avid fan to the next. This is basically Stephen King’s loveletter to authors and readers everywhere. Here is an excerpt from the book which I designed using Typorama: 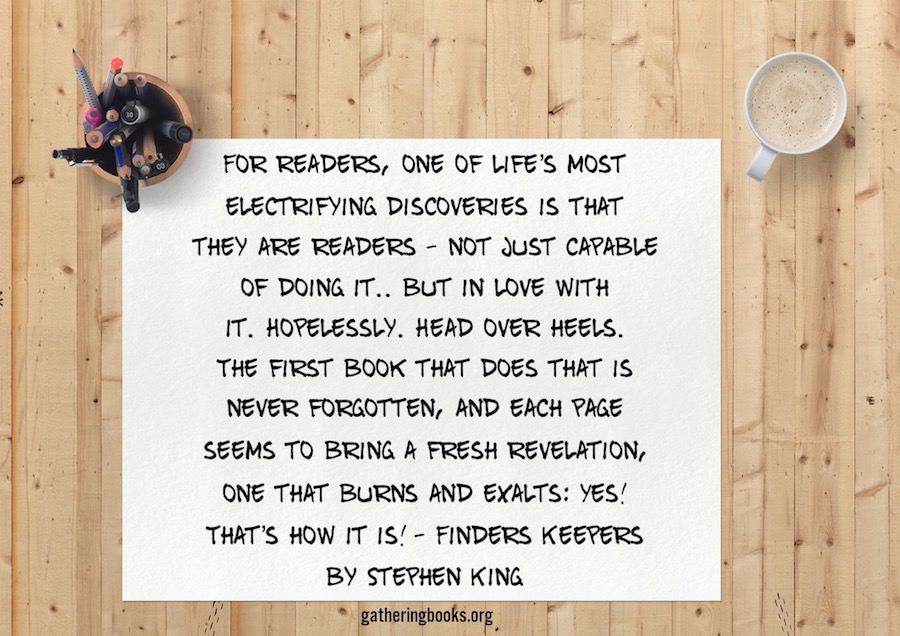 While there may be Stephen King fans who would see resonances with his Misery, this one has a distinct identity of its own. Truth be told, I consider this to be one of his most accomplished works to date. What can I say, the man seems to get even better with time.

The story moves between two timelines: 1978 marked by the death of an iconic American writer, John Rothstein whose fame can perhaps be paralleled to JD Salinger with all the teenage angst, existential queries of his main protagonist whose life story was traced across a series of three novels. He was murdered by a pretentious, literary 20-something psycho reader fan of his, Morris Bellamy, who felt that Rothstein made his main protagonist “sell out” at the end of the third novel. Bellamy also stole not just Rothstein’s cash from his vault but all his Moleskine notebooks containing unpublished materials from the series and a few other stories. Psycho fan buried the books and the money, and went on an alcoholic binge that led to rape and a life imprisonment with parole. Basically, he was imprisoned for a different crime altogether, leaving the notebooks to supposedly rot in oblivion until fast forward to 2009 when a young boy, Pete Saubers, discovered the trunk that contained the cash and the notebooks, after his father was nearly killed by Mr. Mercedes. Not only was Stephen King able to masterfully weave Books 1 and 2 together, he also had to contend with different timelines in the current story, while also providing sufficient background information about the Rothstein novels that rendered it unforgettable and an American classic. While a few readers mentioned how the middle part seemed to drag for them, I felt that the pace was just right, and I was emotionally invested and engaged throughout the narrative. It was a much-needed escape and reprieve. Hence, the books journeyed from the hands of one avid reader to the next, surrounded by the inimitable air of murder and mayhem that is uniquely Stephen King. 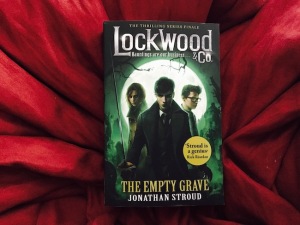 I am a huge fan of the Lockwood and Co. series, so I immediately pre-ordered this title the minute I learned that the paperback version was available. This one has the same frenetic pace as the first four novels (see here for my review of Book 1, Book 2, and Books 3 and 4), and while I am sad that the series is now over, I felt that Stroud gave the characters a fitting end to their adventure. Honestly, I wouldn’t want to see them grow up to become adults.

What makes this book a good fit to our theme, though, is how the team had to break into a library to steal Marissa Fittes’ book Occult Theories containing evidence and relevant information regarding The Problem and how it began or at least was explained by the founder of Fittes’ agency. This book nearly caused George his life and is at the crux of the story. Then there is another book serendipitously found in the same library entitled Ghost Lore among the Tribes of New Guinea and West Sumatra: A Presentation given to the members of the Orpheus Society by Celia and Donald Lockwood providing new insight as to the cause of death of Lockwood’s parents. More than anything, I am heartened by how the entire team makes use of libraries and reading materials and research to prepare themselves for their ghost-hunting/ghost-vanquishing adventures. If you haven’t read this series yet, you are missing out.

6 comments on “[Monday Reading] Literary Mayhem, Manuscript Mysteries and the Migratory Journeys of Books in Four Novels – and Launch of Nov-Dec reading theme”