I remember reading the first four books in this series a few years back and being absolutely riveted by it. As we feature #metareading – themed books, I figured it would be a good time to revisit and re-read these comic books.

Unfortunately, we only have the first four books in our libraries – and I am not too certain whether I can review all four – so consider this the first part of several posts.

According to Bill Willingham’s Introduction, this graphic novel belongs to what is known as the LAF Triumvirate: Literature-based fantasy; Animal fantasy; and Fairy Tale fantasy. Willingham would, most naturally, know this triumvirate intimately given that he is the creator of the equally popular graphic novel series, Fables.

In this first book, however, the literature-based aspect is much more keenly felt.

True to its meta-reading nature, the book begins with a fragment from a book, the Tommy Taylor fantasy series. Think of Harry Potter in almost-biblical and cult-like proportions – and you have Tommy Taylor. Except that the author, Wilson Taylor, has gone missing. Apparently, the author has also based his fantasy stories on his own son, also named Tommy (or Tom, as he insists, to establish his separate identity from the fictional character) – who is now going on comic-con and book-signing tours on his father’s behalf, and milking his father’s popularity for all its worth. Things began to unravel when a member of the audience, Lizzie Hexam, in one of his book tours, asked Tom about his real identity, indicating that much of the information about him seems to be fabricated, and that he is actually the son of a Bosnian refugee couple who have now come forward, claiming parentage.

Conspiracy theorists would have a field day with this book, especially as there is now growing speculation that Tom may actually be the real Tommy Taylor from the novel – the word made flesh. Others even regard him as the Messiah. It doesn’t help matters any that the author, Tom’s father, is nowhere to be found. Given these startling revelations, Tom went on a journey of self-discovery and found himself questioning the very fabric of his reality: 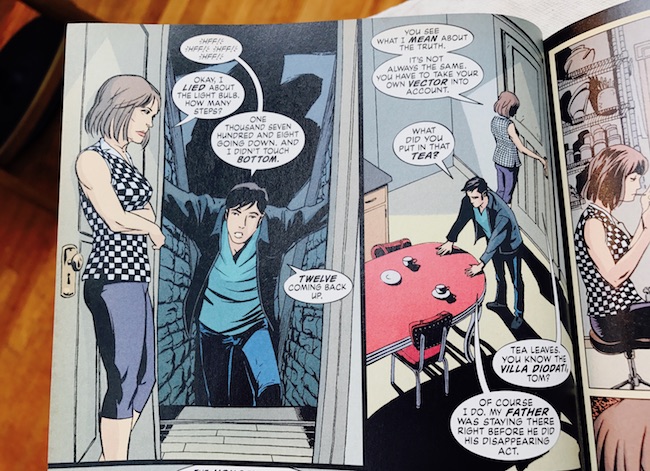 I love the image above. His father’s mistress noted something significant about the nature of truth: “You see what I mean about truth. It’s not always the same. You have to take your own vector into account.” There are a lot more brilliant asides in the novel, as it does appear that there is a super secret society pulling all the strings, especially after Tom Taylor got framed for murder in his father’s villa in Switzerland.

Among all the characters in this first book, I was especially drawn to Lizzie Hexam who seems to specialize in getting Tom in trouble (recall her unprecedented announcement about Tom’s bogus identity during the comic con), while at the same time ensuring that she rescues him from the very chaos that she has thrust him into. 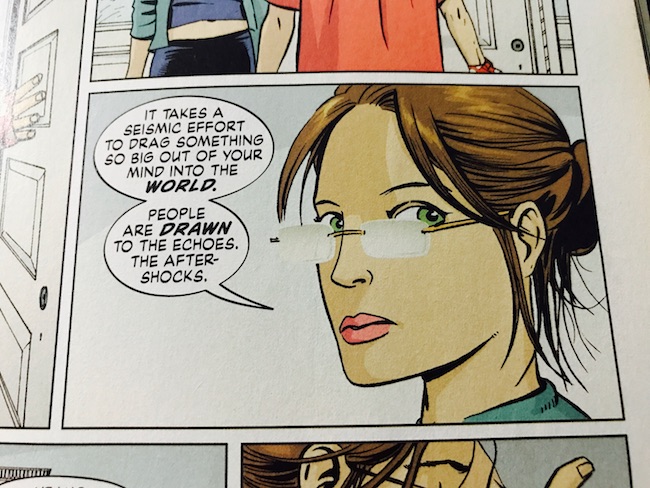 More than anything, she seems to be testing Tom’s readiness – for something huge. She is kind of like your Hermione Granger in the Tommy Taylor series – brilliant, fierce, and resourceful. Tom seems like your typical clueless, determinedly-incredulous boy-next-door who gets swept along by the tide. He does have one thing going for him, though. His father trained him in literary geography: matching places in the “real” world with significant events in famous novels – or even the origins of stories that eventually became classics.

What really made me sit up and pay attention is the allusion to how this super-secret society seems to be manipulating world events by quietly supporting (and steering) talented authors to create stories that would shape people’s consciousness: authors such as Mark Twain (or Samuel Clemens) and Rudyard Kipling are included here, along with Oscar Wilde whose being discredited and imprisoned was actually part of one huge master plan.

Did I tell you already that this series was brilliant? While bibliophiles are deeply aware of how books have the power to mould people’s thinking – Mike Carey and Peter Gross have clung to that notion like dogs with a bone and never really let go, extracting the juice from its marrow and exploiting it for all its ramifications – with a bit of paranoia and conspiracy thrown in.

This first book in the series ended with Tom Taylor being arrested for the mass murder in Villa Deodati in Switzerland and Lizzie Hexam, once again, being inconspicuously absent when the proverbial horse crap hit the ceiling. Evidently, Carey and Gross know how to end a book with a veritable cliffhanger. Until the next book then.