We can not possibly explore a Literatura Europa reading theme without touching on the horrors of the Holocaust. This week, we are sharing literature that explores this painful part of our collective history. 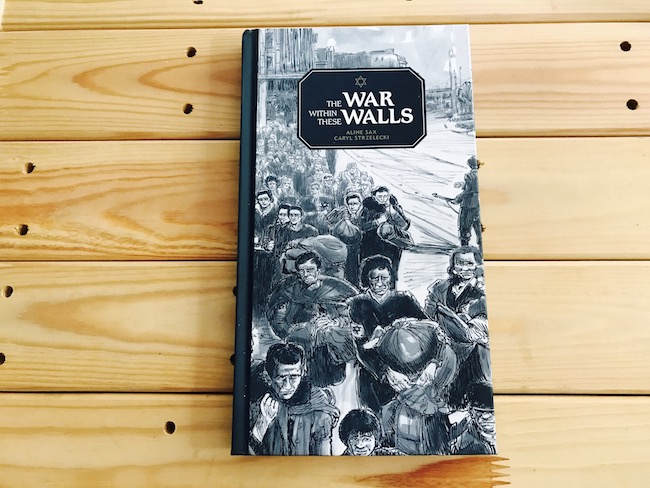 The War Within These Walls

It is difficult to categorize this book as it does not really seem like a graphic novel, but it is definitely not a picturebook. Its unusual size, tall and rectangular; along with the predominantly muted blue hues contribute to its unique quality. The closest I can possibly describe it is an illustrated historical fiction novel.

While the main character in this story, Misha from Warsaw Poland is fictional, the horrors that happened in their city and the ghetto where his family and the rest of the Jews have been imprisoned and isolated, are anything but. 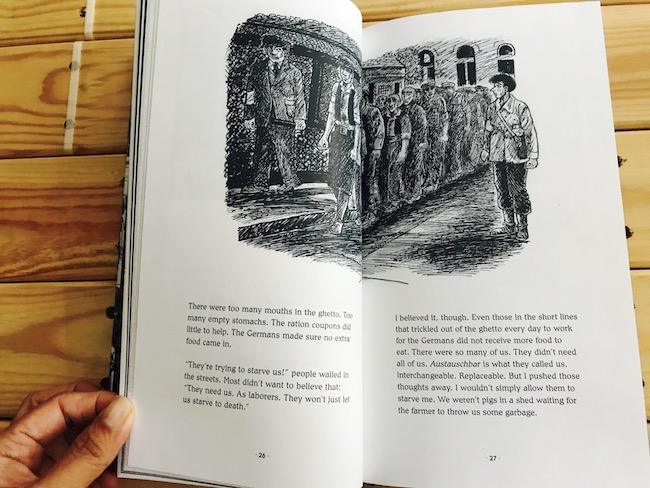 While other people, jaded from reading too many Holocaust-themed stories, may dismiss it as another permutation of the same traumatic event in the past, there is something different in the format, the layout, the build-up in the narrative that makes this particular book stand out for me.

Perhaps it is the refusal to “go gently into that good night” that struck a chord within me. Misha continued to question the rules, to find ways around the restrictions imposed on them even to his own and his younger sister’s detriment. 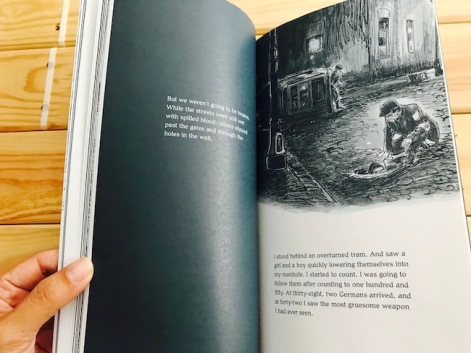 While his parents and the rest of his neighbourhood were pretty much resigned to their fate, there was a quiet rebellion within Misha that was recognized by Mordechai Anielewicz, a real person who was one of the leaders of the resistance in this Warsaw ghetto. The Afterword detailed the actual events that transpired during this time in history. Instead of quietly bowing their heads in shame, Anielewicz, along with around 750 Jewish fighters desperately fought off thousands of Nazi soldiers for over four arduous weeks. For a time, the Polish flag flew alongside the Jewish one for the world to bear witness.

This is a remarkable story of resistance and resilience. It shows the reality of a pipe dream that no one thought would be realized. While the story did not end happily, no war stories ever do, it was the tenacity and sense of purpose that would stay with the reader for a long time to come.