These two books have been receiving a lot of quiet buzz from a few people who are hyper-alert to astounding international titles from around the world. Both are not yet available in our public libraries and I ordered them via Book Depository for my upcoming presentations/conferences here in Singapore. Hopefully, you find these books in your part of the world!

Written by: Samad Behrangi Illustrated by: Farshid Mesghali Translated by: Azita Rassi
Published by: Tiny Owl Publishing, 2016 ISBN13: 9781910328002
Bought a copy of the book. Book photos taken by me.

This is a beautiful philosophical tale of a little black fish who believes that there must be something beyond the stream that he and his mother and all the other black fishes have been swimming in for forever. 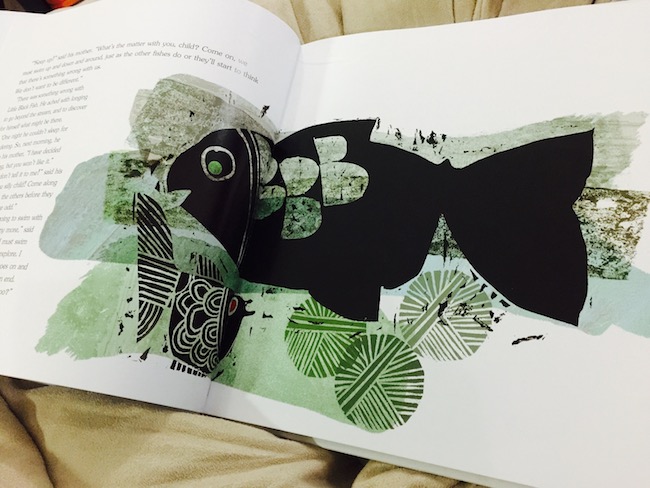 And so the little black fish took a huge risk (there was really no question for him but to leave his safe and thoroughly examined space filled with unimaginative/unquestioning creatures) and went out into where the stream ended as it moved into the river and then the sea – where he encountered marvels (and dangers) that he did not even imagine existed: 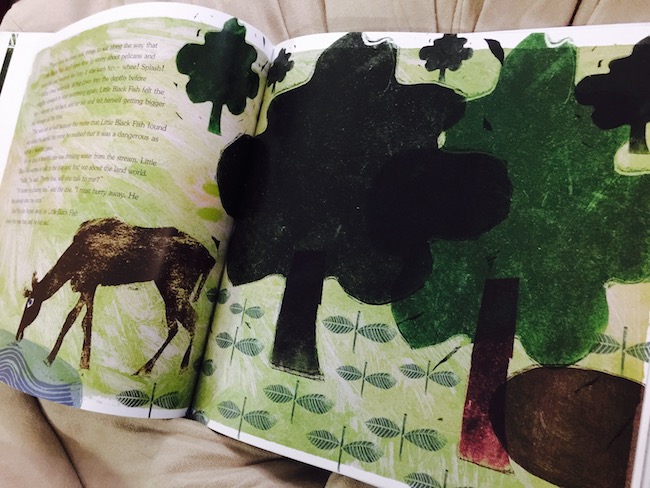 I imagine that others may consider this a cautionary tale of sorts, but it could also be perceived as a story of great heart and courage, as one truly grapples with what it means to truly live, rather than merely survive. I was especially struck by the description of the book found at the end of the story:

First published in 1968, The Little Black Fish was written and read as an allegory for a nation in which it was dangerous to dare to be politically different. The book was banned in pre-revolutionary Iran. The simplicity of a ‘children’s story’ about a fish daring to mix with other kinds of creatures and other ways of life, offers a useful case for discussion by all ages about the big questions at the heart of political debate.

I believe that even young children would take a lot from this book as it explores what it means to defy well-meaning, protective parents in order to follow one’s path – and what such life-altering choices could entail – in terms of being true to one’s self, making new friends, and encountering different places where one is perceived as an outsider or the foreign one. Interesting that despite the story being published as far back as 1968, this story has a lot of resonances during this day and age. 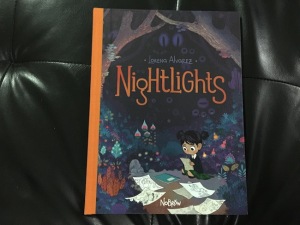 This is one example of what is known in academic circles as a crossover picturebook – or a fusion text depending on who is looking at it. It is longer than your usual picturebook, and it has panels and text bubbles which could make one perceive this as a graphic novel – but its heft and packaging renders itself to a more picturebook feel. Regardless, it does have that blending of genres, making it a delicious read as it defies easy categorization.

In this story, the reader is introduced to young Sandy who lives for drawing and doodling – I am sure you know quite a number of kids who prefer drawing to doing homework – they would definitely identify with Sandy here who pretends to be a “heavy, heavy rock” as her mom reminds her to complete her assignment first before doing her art.

I love those full-spread pages where the reader can just immerse in Lorena Alvarez’s art – the vivid colours, the curious strangenesses that are so distinct but also somewhat familiar at the same time. Things take a turn for the slightly weird when Sandy meets the new girl in school, a girl named Morfie who seemed singularly fascinated with Sandy’s art. 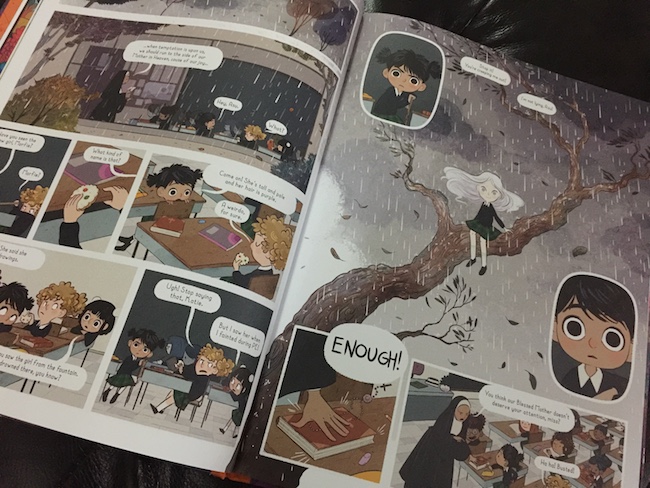 Yet, the strange thing is that Sandy is the only one who can see Morfie. I also found it really interesting how the school is being run by nuns – I attended a Catholic school from elementary to high school and the way that the nuns are portrayed here reminded me of my growing-up years:

There is also a surreal, otherworldly, magical realism component to this graphic novel/picturebook that appealed to my sensibilities. I know that there may be a few conventional types who may find it too out there or the ending unresolved, but I like how open-ended it was – providing spaces for the reader to draw their own conclusions. I also especially enjoyed how the sense of place has been captured in Alvarez’s art (see below):

Alvarez was born and raised in Bogota, Colombia – and the bio at the back of the book says that her “work is influenced by the vibrancy and colour of her home town as well as the experiences and atmosphere of the Catholic school she attended as a child.” I also recalled hearing about a number of ghost stories in our old school which was established and set up by the Spanish friars as early as the late 18th century in Intramuros Manila, so I could definitely relate with the ghostly aspect of Nightlights. But more than that, it is also a celebration of creativity and the feelings of isolation and vulnerability that oftentimes go along with being an artist. This is definitely one book you should find and experience for yourself.