Merry Christmas, awesome people in the kidlitosphere, YA blogosphere, and all ye netizens.

Since we are about to end our current reading theme, I thought it would be best to finally celebrate with even more fantastical beasts, and the many places where they can apparently be found/discovered.

I’ve had this book for awhile now, but have only read it recently for our current reading theme. If I remember correctly, this is supposedly an official text in Hogwarts. In fact, this is a book owned by “Harry Potter” himself and apparently shared by Ron Weasley as well because clearly he has his priorities straight (see the writings in the front page):

Think of this book as a miniature encyclopedia of fantastic beasts complete with Harry’s (and friends’) marginalia and tiny commentaries. The alphabetically-arranged list of beasts is complete with detailed descriptions and the Ministry of Magic classifications – ranging from X (boring) to XXXXX (known wizard killer/impossible to train or domesticate or as the marginalia indicated, anything Hagrid likes). More than the A-Z exploration of beasts, though, I especially enjoyed reading the Introduction of Scamander which explored seemingly existential questions as to what constitutes a beast (is it number of legs? a humanoid appearance? a measure of intelligence?) – and what to call those who are not considered beasts? It may seem fairly straightforward, but given the state of the world today, I am tempted to say that doesn’t apply any longer.

Apparently, those who are not “beasts” are considered “beings” and that a “being” was “any creature that has sufficient intelligence to understand the laws of the magical community and to bear part of the responsibility in shaping those laws” – as decreed by Grogan Stump, Minister of Magic. However, the plot thickens as there are some creatures who refused this “being” status and requested to remain “beasts” such as centaurs for instance. Whereas creatures such as werewolves have been classified as being either one or the other on several occasions. I didn’t realize fantastical creatures could have this sort of existential crisis as well, not unique to sentient humans apparently. Scamander also went on to discuss the history of Muggle Awareness of Fantastic Beasts and steps taken to ensure that they are not seen by the unworthy naked Muggle eye. For magical beasts in hiding, there are also descriptions of their safe habitats as well as the controls being implemented on selling and breeding and the importance of ‘magizoology.’

I suppose what also makes this particular book unique is the relatively-amusing doodles and doodads (see image above) that bring us back to HP days when Harry, Ron, and Hermione were so young and innocent and full of promise. Add the fact that all proceeds from the sale of the book go to a fund that helps out “needy children in the poorest countries in the world.” I would recommend you grab a copy of this so that you’d at least have an inkling what a Niffler is or a Demiguise for that matter (and where to find them if you want to go beast-stalking).

Fantastic Beasts and Where To Find Them: The Original 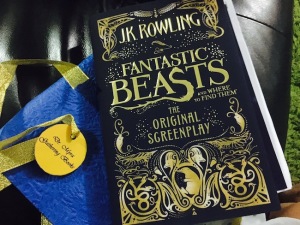 I swore I gave out a fantastical squeal the minute I held this book in my hands. Work has been more stressful than usual, and it is book presents such as these that make my heart sing. I devoured the book after I’ve seen the film which my daughter and I enjoyed thoroughly.

I also wanted to commend the book design, layout and the thoughtfulness in crafting this precious gem of a book: truly a labour of love. 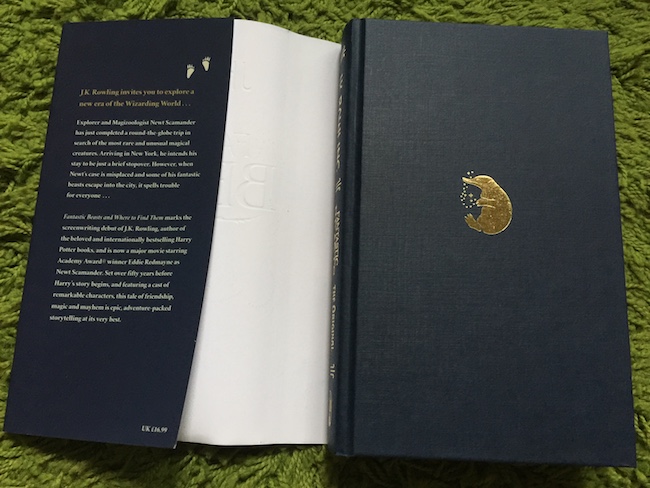 When I first learned about the movie adaptation, I immediately wondered how an encyclopedia of beasts could possibly be made into a film. Hah. I shouldn’t have wondered too much. Apparently, a new script has been written for just this purpose, complete with brand-new characters people would enjoy knowing about.

I see this book being of wondrous interest to aspiring filmmakers. As the cover says, the book contains the original screenplay alongside filmography terms such as Back to scene, Int (for interior or indoor location), Jump Cut, Montage among others. For diehard fans, I can imagine them watching the film again and again, and reading along the lines as found in the book. How cool is that? If you want to add another book to the belated Christmas list you wish to give to friends and family, do consider this. Definitely worthy to be part of your HP collection. And here is the movie trailer for your delectation, dear friends.