It has been awhile since I last joined the Poetry Friday community – and I am glad to be back. We have just launched our reading theme this September – October: Into the Wild – The Untamed, The Mischievous, Artists and Rebels in Literature. 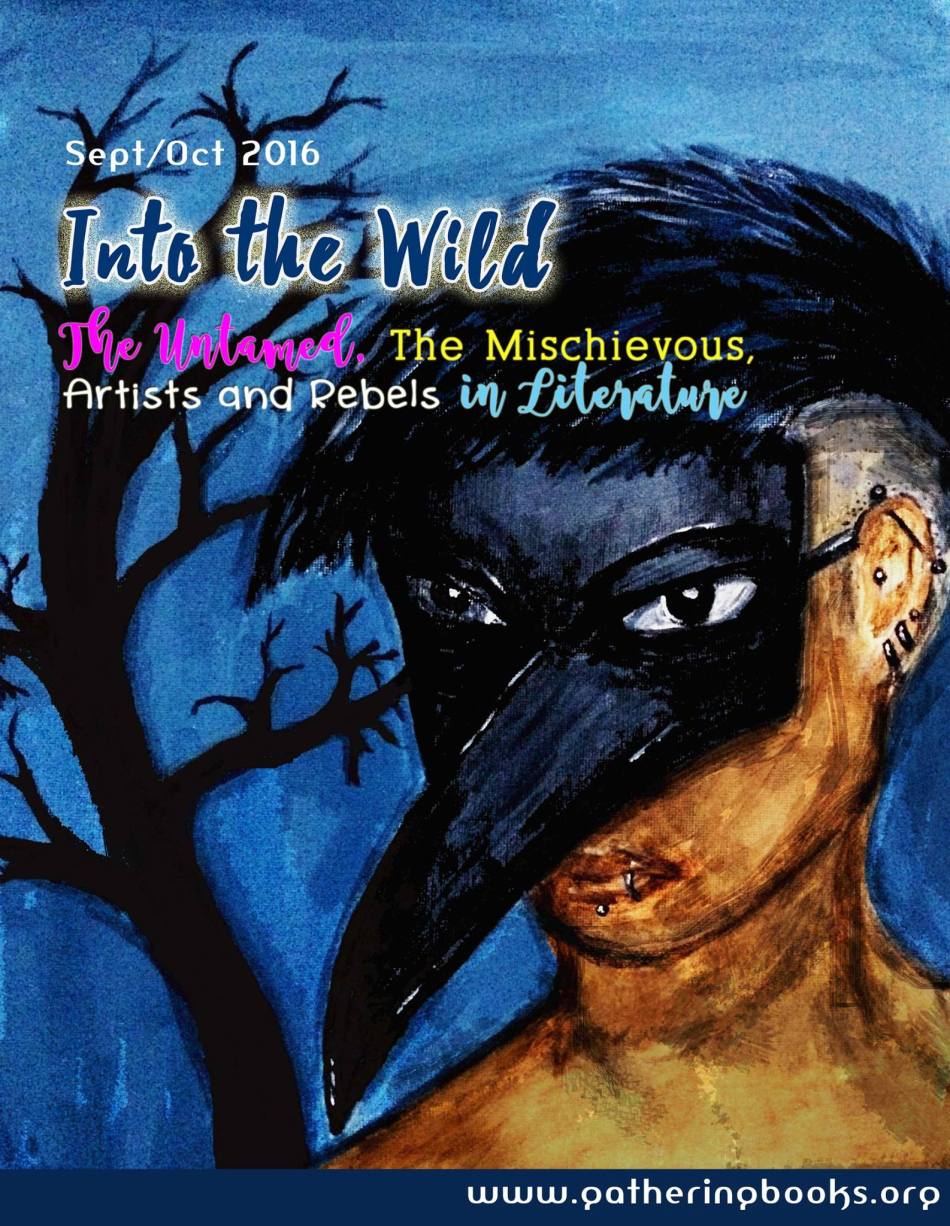 Given our theme on artists and rebels, I thought it would be great to share the lyrical poetry of Bob Dylan’s music. Back in 2010 when we were first starting out in the blogging community, our very first reading theme was called Picturebooks that Sing. This was when I was introduced to Bob Dylan’s song Forever Young that was transformed into a picturebook. If you know the songs I am featuring today, as I am sure most of you do, please feel free to sing along.

This week’s Poetry Friday is hosted by the immensely talented poet herself, Amy Ludwig VanDerwater of The Poem Farm. 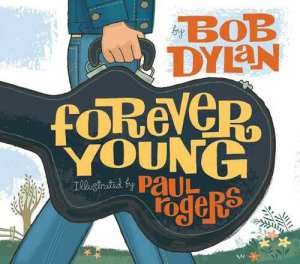 The picture book opens to a cartoon image of Bob Dylan holding up a little placard that says “Dig Yourself.” Thus, the ‘chill’ ‘hippie’ ‘sixties’ ‘indie’ vibe has been established ingeniously by the illustrator Paul Rogers from page one.

As I was reading through Bob Dylan’s biography – one very visible thing that struck me (aside from noting his multiple talents: he plays the guitar, keyboards, harmonica, and yes he paints too and does exhibits in museums) is that the critics can not seem to decide whether to love him or hate him. Yes, his being a recipient of countless awards including being inducted into the Rock and Roll Hall of Fame, Songwriters Hall of Fame and even a special citation from the Pulitzer Prize jury in 2008 for his indelible mark on American music – is a testament to the very clear recognition of his talents and skills. However, his vocal style has also been described as a “one-dimensional growl with which he chews up, mangles and spits out the greatest lyrics

ever written so that they are effectively unrecognizable” (Mc Cormick, 2009)* What fascinates me though is his being a supposed-reluctant posterboy during the flower power period, and most of his songs during this period characterized as “protest music.” My current research interest is looking into the power of music to forge a sense of nationhood and to create a strong sense of national identity through song (particularly in Filipino music) – hence, my fascination with Dylan’s work. BUT, I would not even attempt to characterize the legend that is Bob Dylan in our pages since I am afraid that I might not do him justice, nor his music, so let’s stick to the book, I have digressed considerably, I apologize. The academic in me just couldn’t resist.

The last two pages are filled with Illustrator Notes that explain in meticulous detail what some of the images mean – very useful for the unschooled such as myself. It does help that the equally talented illustrator Paul Rogers is a Dylan fan and has studied his life extensively. Hence, the drawings are even more meaningful in the sense that it includes snapshots of places that are significant in Dylan’s development as a musician – including Café Wha, the very first place where Dylan performed upon arriving in New York, the New York Public Library which Dylan frequents, Greenwich Village, Washington Square Park to name a few. To say that Rogers did an enormous amount of work in this picture book would be a classic understatement.

Each page is bursting with details that beg to be overanalyzed and linked to Dylan’s history and music. Click here to know more about Paul Rogers and his work.

Each page of the book contains one or two lines from Dylan’s classic song. The timeless message of “May God bless and keep you always… may your wishes all come true” from the song are all found here. What made the music come even more alive is the way that Paul Rogers interpreted it through the visual storytelling of a boy avidly listening to his 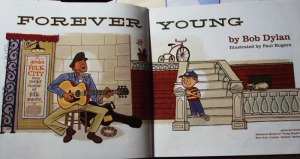 idol perform in Gerde’s Folk City, New York’s Center of Folk Music, receiving the idol’s guitar, subsequently inspiring him to create music and to touch the lives and hearts of others through song. I have of course taken a peek into Paul Rogers blog where he discussed certain elements of his visual storytelling through his artwork. Apparently, this act of handing over the guitar is similar to the proverbial ‘passing the torch’ which is likewise reminiscent of Dylan’s history as explained by Rogers in his Notes: “Johnny Cash gave Dylan his guitar when the two met at the Newport Folk Festival in 1963.” One could also link it to Dylan’s adulation of Woody Guthrie whose work has influenced Dylan’s music immeasurably.

Every page is cleverly crafted to provide allusions to Dylan’s songs and fragments of his very colorful life. A perfect illustration would be this page [which comes with the lines “May you always be courageous, Stand upright and be strong”] showcasing three Beat Generation writers {Jack Kerouac, Allen Ginsberg and William Burroughs} signing the petition for our young musician to “save the planet.”

While your young boy or girl would no doubt be fascinated by the colorful illustrations, the hippie Mom or Dad would spend around two hours or so trying to figure out who’s who in the book pages.

and Paul McCartney carrying the logo “Stop the War!” “Peace Now!” and “No More War.” If Mom (or dad) is in a lecturing mode, this could be a teachable moment where one could talk about the Beatles, introduce Joan Baez, and clarify that Martin Luther King is not the new member of Glee this season but some important historical figure who was part of the “times, they are a changin’” as Dylan himself crooned (or spat out from his mouth depending on whose view you are taking).

The visual tale ends the same way the book begins with the young boy, now a full-grown man (we are assuming of course that this is Dylan himself) passing the torch (the guitar, that is) to a bright-eyed young girl. This picture book while a fairly short read, never fails to inspire and affirm, urging one to celebrate the color of one’s soul – or chakra, essence, universal-mother-earth energy. This rootedness to one’s core while building “a ladder to the stars” and climbing “on every rung” is what makes us perpetually young.

I am aware that there are people who think that this is more a picturebook that would be appreciated more by adult fans than by children. However, I may be the wrong person to ask about this – as I don’t draw these distinctions. And as the song/poetry goes:

Blowin’ in the Wind 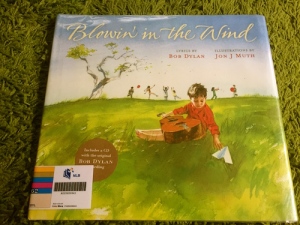 In contrast to the first book, this one seems to have been better received by critics. While one may claim that this has a much deeper message compared to Forever Young which is mostly uplifting and hopeful, Blowin’ in the Wind has a questioning tone to it that remains largely unresolved, albeit still optimistic. 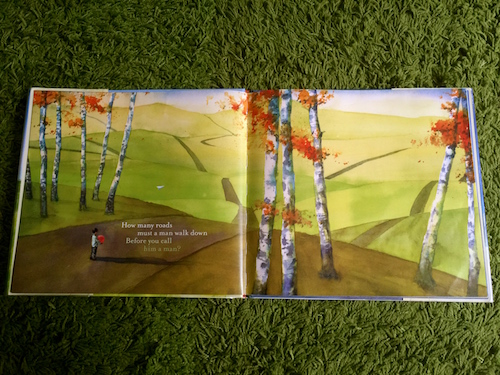 It could be because Muth was able to capture that ephemeral quality of the song by featuring images that depict an artistic rendering of a particular stanza as may be perceived from an innocent child’s eye – a distilled quality that remains true to its message.

While it is not layered with visual codes and allusions like Forever Young, Muth’s washed out watercolours, and an overarching thread in the art (as seen in the balloon, the guitar, the paper airplane) seemed infinitely more effective for me.

As Muth explained in his Artist’s Note found at the end of the book:

The beauty of this song is that, while Dylan wrote it at a seminal moment, its sentiment is universal and timeless. Just as each of the children in my illustrations has his or her own paper airplane, each of us knows what needs to be done in our worlds. The song speaks to a truth found in us all. 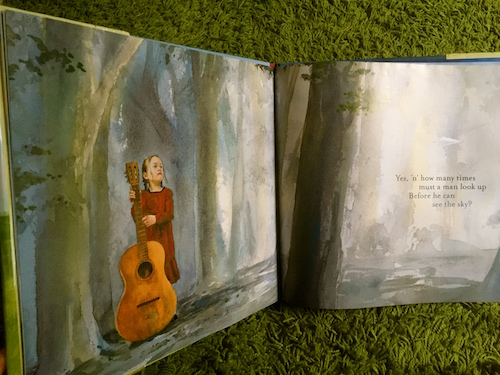 I was also particularly taken by the note from Greil Marcus, a Music Historian and author of Mystery Train: Images of America in Rock ‘n’ Roll Music also found at the end of the book:

“Blowin’ in the Wind” asks questions. When there is trouble in the world, in our own towns, in our own families, why can’t we admit that something is wrong, and try to do something about it? Why are some citizens treated unfairly? Why do some people think they are better than others? Why do we fight each other?

Perhaps the answer is truly “blowin’ in the wind.” Here are beautiful video clips of Bob Dylan singing these two songs. Enjoy!