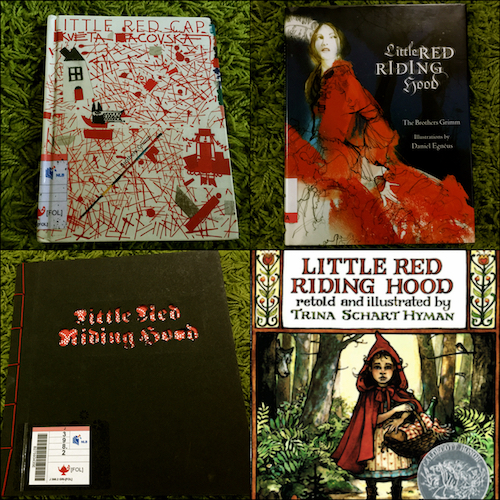 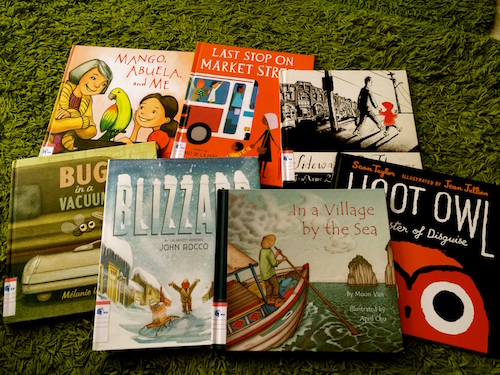 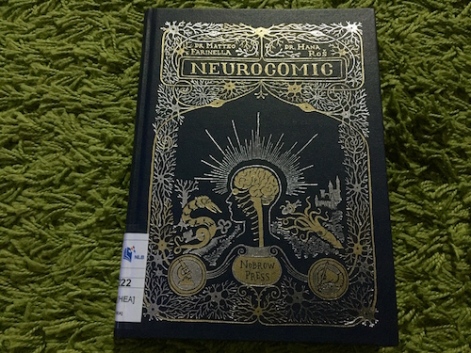 There are quite a number of versions of Little Red Riding Hood and I was pleased to find quite a number of them for our current reading theme – from post-modern/avantgarde to die-cut/silhouette art to fairly traditional illustrations. I selected these four titles as they present a relatively-faithful presentation of the original story.

Written and Illustrated by: Kveta Pacovska Translated from the German by: Elizabeth D. Crawford
Published by: A Mini-minedition, 2008
Borrowed from the Jurong West Public Library. Book photos taken by me.

I am a huge fan of Kveta Pacovska’s avant-garde, odd, experimental art. When we had a fairy tale reading theme years ago, we featured Pacovska’s Cinderella (see below):

It is with great excitement that I discovered Pacovska’s version of Little Red from our public library. Unlike Cinderella which used Perrault’s text, Little Red Cap was translated from the Brothers Grimm German by Elizabeth D. Crawford. While there are a few pages filled with text,

I was pleasantly surprised to be immersed by the strange, experimental, colourful art in quite a lot of full-spread pages – particularly the end papers as you can see below:

The caption: “Never again will I wander off the path” is also a not-so-subtle reminder of the cautionary aspect of this fairly-disturbing and harrowing fairy tale. There is also a nod to Grimm’s original version with Rotkappchen indicated in one of the drawings, which happens to be the original title of the story: 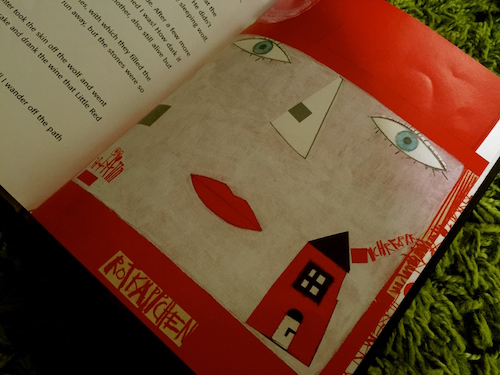 The text is also engaging, with a lyrical ring to it:

Little Red Cap glanced around her. When she saw how the sunbeams danced back and forth through the trees and the beautiful flowers that grew everywhere, she thought, If I were to bring Grandmother a fresh bouquet, it would make her happy.

There are also resonances to its being quite an ancient story, with the hunter’s reference to the wolf as “you old sinner.” Pacovska’s art may not be for everyone. I feel, however, that books like these also serve as a good introduction to children on how they can witness beauty in the strange, the charming in the surreal configurations – and hopefully empower them to come up with their own artistic renderings and variations of well-loved tales.

Illustrated by: Sybille Schenker Translated by: Anthea Bell
Published by: Minedition, 2014
Borrowed from the Jurong West Public Library. Book photos taken by me.

This is another Minedition publication, albeit printed in a comparatively bigger format. The text-narrative, though, is practically the same as Pacovska’s, except that the composition and layout of this one is strikingly different. For one, the black cover with the silhouetted letterings for the title, the seemingly handcrafted nature of the binding evoke the resonances of the collected-stories-from-peasants aspect of the tale.

Needless to say, the intricate die-cut pattern with its layering onto the next page is one that would make any reader gasp out loud with glee. One is given the privilege to peek into what will happen next, the layered transparency adding a different dimension to the story.

As you can see above from the left-hand side of the page, even the text is superbly interwoven into the page/silhouetted image. In the right-hand side of the page, despite the fact that it’s not a cut-out page, it gives the appearance of such – which simply goes to show that Schenker is indeed a “master of paper design” similar to how she is described at the back cover of the book. What made me really amazed, though, was how Little Red Cap was swallowed by the wolf, facilitated by the turning of the page and the die-cut pattern as you can see below:

Schenker also made such effective use of framing and size to magnify the role that the huntsman played in the entire story, yet indicating how central the Grandmother and Little Red Cap remained throughout the narrative: 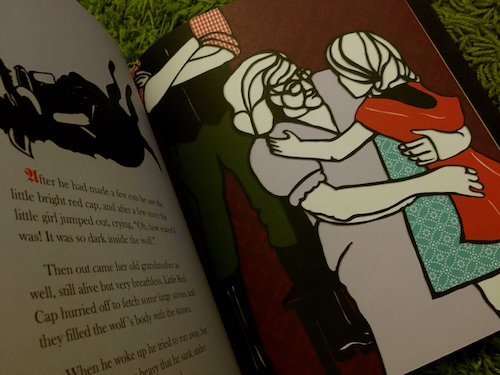 This book, here, is a gorgeous piece of art. Definitely a collector’s item and one that should definitely be added to anyone’s fairy tale library.

Illustrations by: Daniel Egnéus
Published by: Harper Design, 2011
Borrowed from the NIE Library. Book photos taken by me.

While Schenker made use of paper design and die-cut layered textures, Egnéus used typography, colour-contrasts, and composition to provide a sense of sinister danger throughout the story. See the reddish hue in the left corner in the page below: 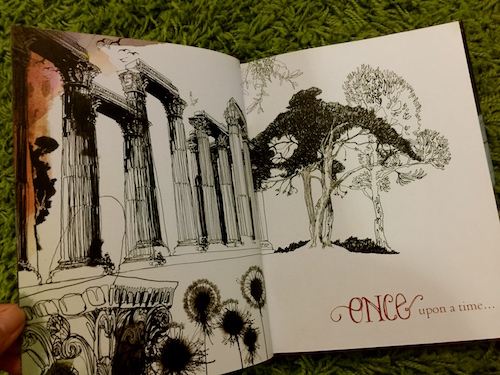 Each page only has a few lines, with the text contributing to the overall design – an image in and of itself – more than just text – see below: 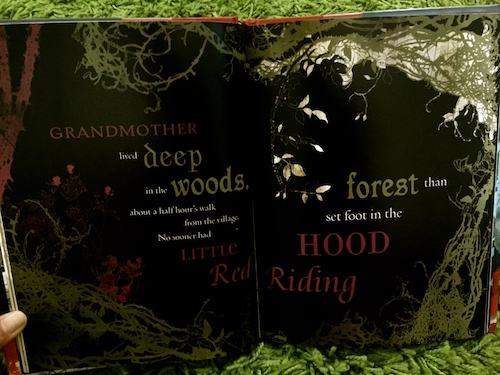 The above image actually reminded me a little bit of Gaiman’s The Sleeper and the Spindle with illustrations by Riddell.

There is also a very Victorian feel to the art – see the image of the Wolf below:

While the text is practically identical to the first two books above, the way that the images are portrayed here seem to make it more palatable perhaps to a slightly older audience as the mood, the setting, and the creeping darkness are more palpable in this version: 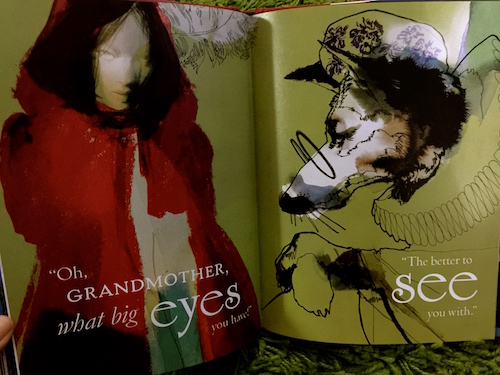 This is a powerful example of how the art can effectively transform any story, bringing it to a different narrative level and storytelling experience altogether. Definitely one of my favourites among these four variants here.

Unlike the first three picturebooks that essentially followed the original Grimm text, Hyman infused a little bit of her own textual adaptation to the story – all very minor, though, and hardly noticeable. It’s just that the first three books are nearly identical in terms of their narrative that Hyman’s version stood out as slightly different.

One striking variation is the fact that Hyman gave this girl a name: Elizabeth – whereas the first three books simply referred to her as a “dear little girl” who was loved by everyone who laid eyes on her, especially her grandmother who doted on her and gave her a little red velvet cap, hence her nickname.

In contrast to the first three books, little Elizabeth brought her grandmother a loaf of fresh bread (not cake) and butter to go with it – but there’s still the wine – because that’s the best remedy for a sick grandma, apparently. 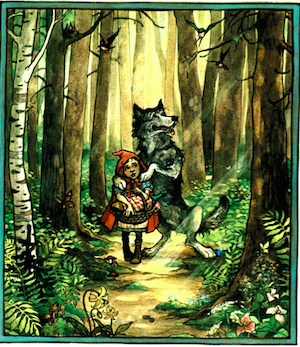 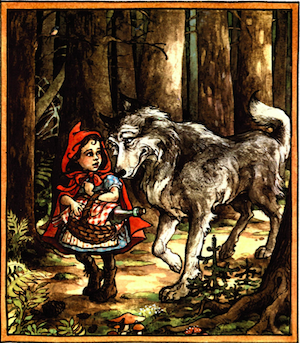 The more I look at Hyman’s art, the more I fall in love with it – her playing with light and shadows and textures. I am not sure if it is just me, though, but I found her portrayal of the wolf as very tame – almost dog-like with its tongue lolling out quite adoringly even – rather than in a sinister, ominous fashion, the way that it’s depicted in other versions of the tale. It is only during the latter part of the story as the wolf is about to devour and attack Elizabeth that the wolf’s true self emerged: 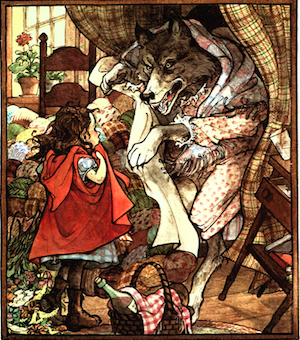 Another striking aspect for me was how avuncular the huntsman appeared like in this version. Similar to the first three books, he also called the wolf “you old sinner.” Unlike the other three books though, this huntsman killed the wolf first before cutting him up – which truth be told seemed more credible really, than the other versions whereby the wolf woke up with stones in his stomach. 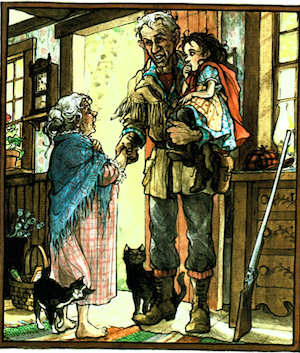 The ending, though, seemed to have a bit of a tongue-in-cheek aspect to it. While it still ended with the moral lesson learned about not straying off the path and living up to promises made to Mother, there was an additional cheeky note:

She was comforted, though, that she had at least minded her manners, and had always said “Good morning,” “Please,” and “Thank you.”

Which ones caught your eye? Which do you think you’d enjoy reading more?

I did manage to finish reading Challenger Deep by Neal Shusterman as well as two biographies by Jane Goodall which I hope to feature for our upcoming reading theme:

I am currently reading Shadowshaper by Daniel Jose Older: 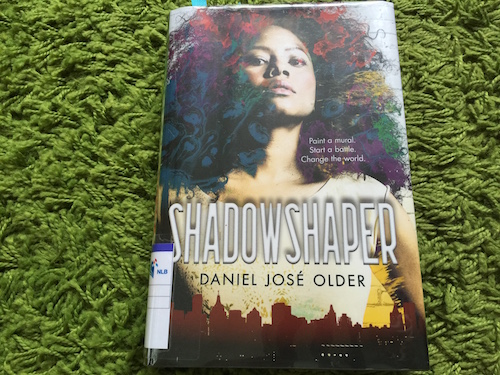 I also hope to start reading Jasper Jones by Craig Silvey as this is our selected book this March for Saturday Night Out for Book Geeks: