I have to say that I am enjoying our current reading theme as it allows me to indulge in my enjoyment of fairy tales. I love re-reading stories that are familiar to me but are illustrated by different artists. These two books called out to me from the library shelves, primarily because of the gorgeous art.

As I re-read this fairy tale, it dawned on me why this was one of the stories that least resonated with me among all the fairy tales that I am now rereading as an adult. Thumbelina seemed to have little sense of self-agency. She seems to simply be drifting through her life, often a target of bigger creatures from whom she escapes only through the help of other creatures who oftentimes also have their own agenda and want something from her.

The parents’ only role seemed to begin and end with their desire to have a child, any child, as they claimed to the witch whom they asked for help. Thumbelina seemed to spare little thought for these parents who wanted her, as she is flown away from one home to the other, or being married off to this creature or that. 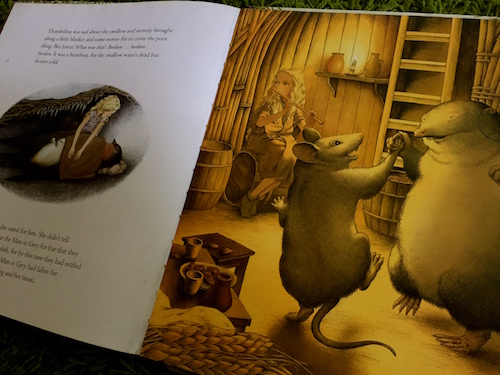 I am pretty familiar with Ibatoulline’s art – which is the reason why I borrowed this book. His dainty, lifelike images seem like a set from an animated film (see below) 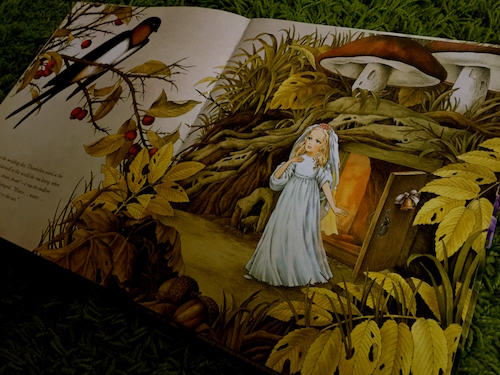 While I would not regard this as my absolute favourite Bagram Ibatoulline picturebook, it still is worth checking out.

As I was crafting this review, I remembered that Bagram Ibatoulline has an artistic rendering of this same fairy tale that I reviewed a few years back. Here is the book cover and the link to my review:

Unlike Ibatoulline’s rounded, almost-Rubenesque artistic style, Tatarnikov struck me as very European with its soft muted colours and angular renderings with a dash of the mystical which I found truly appealing. This version by Tatarnikov was not a shortened version, as can be seen in the text-heavy pages:

but contains all the seven very detailed stories that led Gerda to save her childhood friend Kay from the cold-hearted and cruel Snow Queen. It started off with the enchanted mirror that distorts all things bright and beautiful to something dark and harrowing (see above).

I also realized what made me gravitate towards this story when I re-read it last year with Edmund Dulac’s exquisite illustrations and now with Tatarnikov’s equally gorgeous art. It was the young girl, Gerda’s resolve to save her friend even when he acted in such a spiteful and callous manner days before he disappeared – caused by the fragment of the demon’s glass that lodged its way into his eye and heart.

She believed the best of him even when he acted his worst – traveled to the ends of the earth to find him, even though he was already staying with some other woman whom he thought he loved. And yes, he has totally forgotten about Gerda and his old home. This did not matter at all to Gerda who managed to save her own self from the conjuring witch who wanted to keep her:

the robbers who wanted to kill her:

and found her way into the homes of the Lapland Woman and the Finland Woman whose messages could be read on a dried fish, of all the strangest things:

– all this to save the boy she loves. As you can see in the images, there is something so absolutely enchanting with the way the story is depicted, that it matters little really how long the text is. Here are a few more of my favourite images from Tatarnikov’s rendering of The Snow Queen:

I will be sure to find other books illustrated by Pavel Tatarnikov. His art is unforgettable.

Have you come across these two books? Do share with us some of your favourite fairy tale artists.