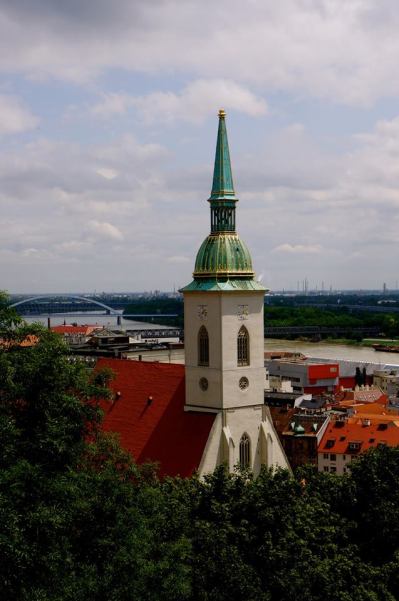 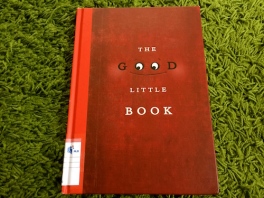 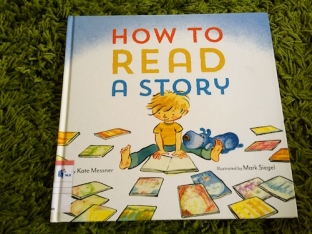 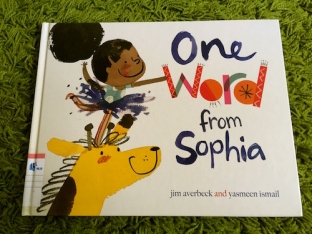 As I was going over the nominated titles for CYBILS Fiction Picturebooks in 2015 – I took careful note of the titles that did not make it to our top seven and checked which ones I loved to create this list. I am sure our First Round Panel of Judges had a difficult time whittling down over 250 titles into just seven – and I also wanted to go over some of the eliminated titles myself, just to see which ones would resonate with me.

The first three titles in this list demonstrate the power of imagination and how one can find amusement within one’s self through hand-crafted, oft-times-serendipitous, discoveries. The last four titles highlight the many faces of home and its transitions and evolutions.

Do take note though that I didn’t really have the opportunity to go over ALL the nominated titles as yet – so think of this as a preliminary list of favourites. For instance, we still don’t have Lady Pancake and Sir French Toast or In A Cloud Of Dust or even The Little Gardener by Emily Hughes in our libraries – so watch out for Part Two of this list as soon as our libraries make these titles available in our part of the world.

Widget Handcrafted by Iphigene for GatheringBooks.

Written and Illustrated by: Daniel Miyares
Published by: Simon & Schuster Books for Young Readers, 2015
Borrowed from the Jurong West Public Library. Book photos taken by me.

Yet another wordless picturebook that demonstrates the remarkable power of storytelling done solely through images: visual narrative at its finest. Miyares is a new-to-me artist and I am glad to have been introduced to his work through this remarkable picturebook that shows a very simple story of a young boy who brought his paper boat outdoors to play with. I was also very impressed with how Miyares played with various perspectives and managed to show that in one full page-spread (see below):

In an age where most children derive their forms of recreation from gizmos and gadgets, this simple hand crafted paperboat and all that it signifies – warmth of home, love of sibling, puddles and rain and all its magic serve as a reminder that one is capable of discovering joy within one’s self. 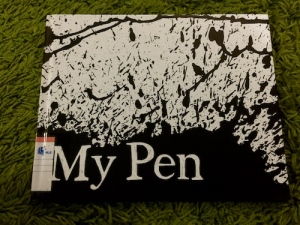 Written and Illustrated by: Christopher Myers
Published by: Disney Hyperion, 2015
Borrowed from the Jurong West Public Library. Book photos taken by me.

Christopher Myers is a favourite of ours here at GatheringBooks – but this book, I believe, is one of – if not the best book that he has done thus far. Dedicated “To the people who make things, and to the people who share them” it is an ode to the power of creating, the act of putting pen on paper and transforming a blank canvas to one of absolute magic. Somehow it illuminates the trite adage “The pen is mightier than the sword” in a fresh, monochromatic, lyrical fashion that captures that unadulterated joy of being and creating:

It demonstrates the process of creating and re-creating, of traveling through a page, and of caring so deeply enough that the art moves, unfurls, and sneaks into one’s consciousness, to lodge there permanently. That is what Myers accomplishes in this beautiful gem of a book: 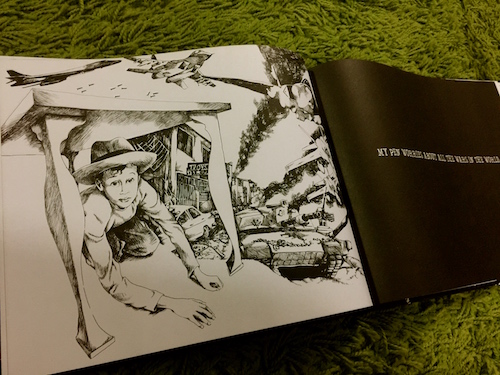 If you don’t know Sadie yet, now is the time for you to find her in your library or bookstores so that you can befriend this little girl who is able to transform a box into a boat, sail around the room – and doing it oh-so-quietly so that the old people can have their sleep in peace. This, she can do and more “and it still isn’t even time for breakfast.” 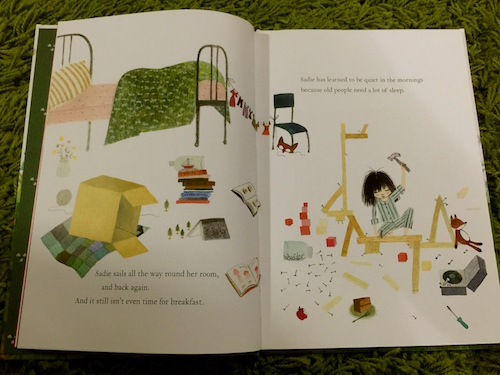 There is a lot of intertextuality found in the narrative that adults might be keen to explore with their young readers. There would be a jump of excitement upon discovery of various allusions and references among avid readers who possess a sharp eye and are quick in forming associations; for instance, see image below – what does that remind you of?

Again, there is that remarkable self-possession evident in Sadie who is able to amuse herself – she can transform a room into a jungle with a howl, or a tree into an enchanted forest with chattering birds, and a stuffed fox waiting for her in her bicycle. A celebration of outdoors, play, imagination. Beautiful. 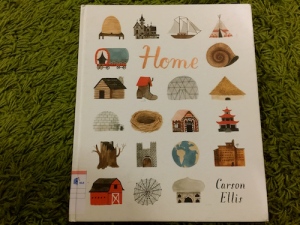 Written and Illustrated by: Carson Ellis
Published by: Walker Books, 2015
Borrowed from the Jurong West Public Library. Book photos taken by me.

My gypsy heart has always been fascinated with the concept of home and how it is portrayed in picturebooks/children’s literature. Almost every year, we feature a reading theme that touches, even tangentially, on home; and so I am glad to finally hold in my hands the many faces of Home as portrayed by Carson Ellis who is a new-to-me children’s book artist.

Each gorgeous full-page spread is marked only by a sentence or two – very sparse, so brief, that one is able to focus more on the details of the art and the colours, the smokes and smells, the turrets and towers, the walls and woodworks: 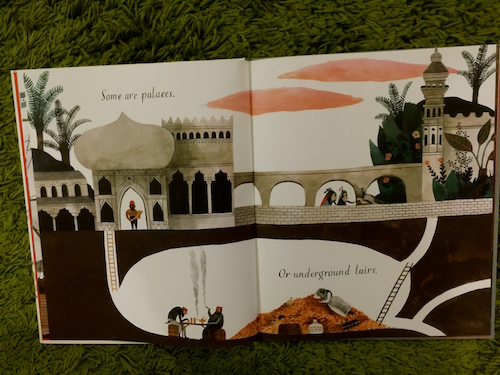 The typography is what got to me and the book design, and the overall feel of the page which invites the reader to run her hands over the book to touch the moss or see through the window pane. There is also an attempt to engage the reader in a conversation as can be seen in the last page: 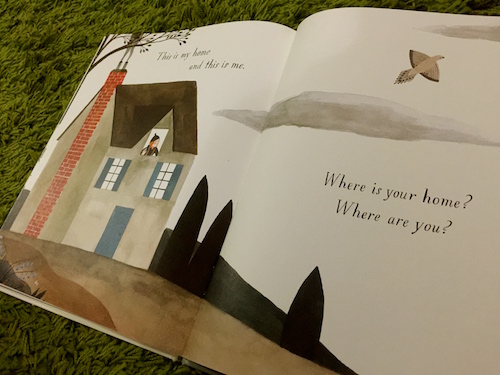 While all the types of home can not be fully represented in a 36-paged picturebook, I like how it includes both businessmen and Norse gods, tree houses and underwater homes, Kenyan blacksmiths and Slovakian duchesses – all so gloriously random and otherworldly and real.

This is a re-read for me as anything Eve Bunting I immediately try to hunt down to devour and savor again and again – this is one such book. I can not believe how I teared up YET AGAIN after reading it a second or third time.

For anyone who knows what it’s like to move to another place, to downsize, to put your pre-loved things on sale – or even if you don’t and would like to know how it feels like to sell your red bike, your books displayed on your garage for rent (which I did, one summer when I was a teenager to earn money), Bunting captures it all with the littlest gesture, the crayon marks on a headboard, and a friend wearing her pyjamas willing to trade her younger brother just to get you to stay. 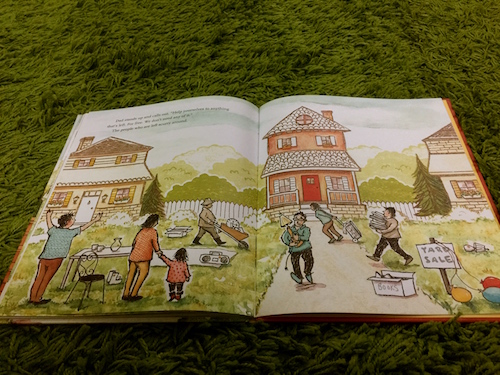 A beautiful reminder of the value of people over things, of warm hugs over big spaces, of simplicity versus acquisition, and that invisible unspoken thing which fits nicely into one’s arms. Read this and hug your loved ones close to you – and don’t let go.

I would not even want to add to the controversy that is this book – a lot has already been said about it: lines have been drawn, apologies have been publicly acknowledged, and enough feathers ruffled, sufficient ire raised to make this book a subject of academic scrutiny for years to come.

That being said, I can not help but marvel at the craftsmanship of this book – almost epic-like in proportion – spanning centuries with the evolution of families and homes, the changes in food preparation with all its subtle intricacies and transformed cultural practices.

Yet the one thing that remains constant is the finger-tasting, bowl-licking, delectable blackberry fool – its purple juice used to paint the endpapers of the book as can be seen in Sophie Blackall’s Illustrator’s Note found at the end of the page. Emily Jenkins also writes a fairly-detailed Author’s Note that indicates the arguable amount of research poured into the making of this picturebook. What struck me as particularly special though was the depiction of the modern family in San Diego – 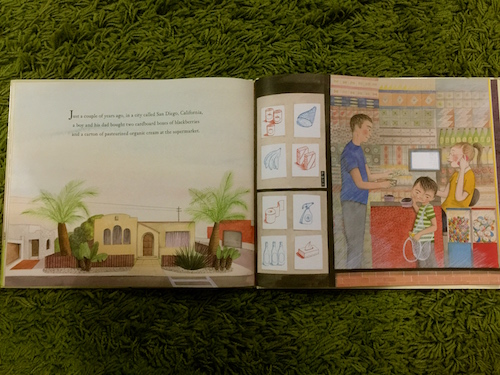 – this resonates with me as we have family living in that state and we make it a point to visit every other year since 2009. The image of the family dining outdoors under the stars touched me and my 14 year old daughter deeply as we read this together: definitely a book to treasure and discuss with your own children.

Much love has been shared about this book – all well-deserved. As is the trademark quiet style of the Steads, this book depicts transition; the pain of moving that is borne silently alone, or at the very least shared with a canine companion; and the comfort derived from friends – whether make-believe, hand-crafted, or actual flesh-and-blood bearing binoculars and marshmallows.

While it may be easy to dismiss this as a book of coping, overcoming and moving on, well yes it is that, but it goes beyond it as well. The art and narrative portray the subtle mastering of one’s self with pillows (lots of them), and dried leaves and blankets (big ones), and a loyal companion that remains, and is present, always. The narrative quietly soothes and provides comfort through scarves, earmuffs, and being rooted, steadfast, staring out into the bridge to make sure the woods stay where they are.

I managed to finish two books but not the ones I originally intended to read last week: 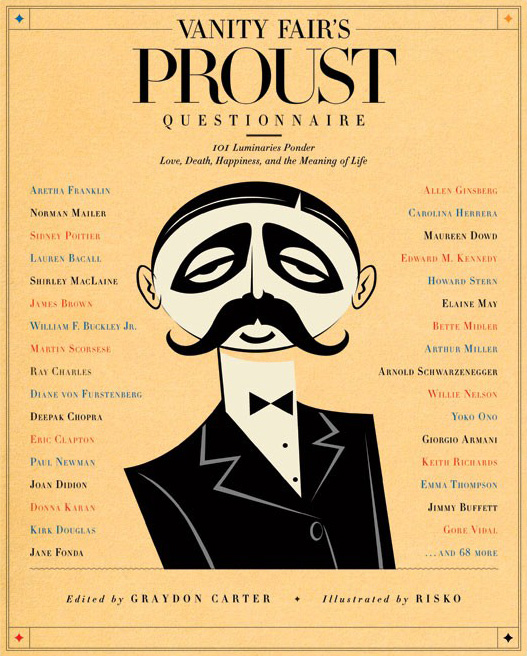 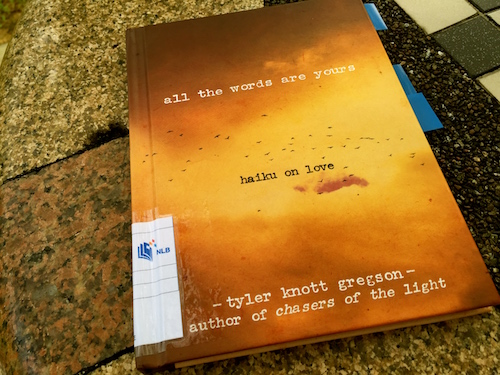 I also finished reading Tyler Knott Gregson’s All The Words Are Yours: Haiku On Love which I will be featuring for Poetry Friday in the coming weeks.

This week, I am hoping to finish reading the following novels: