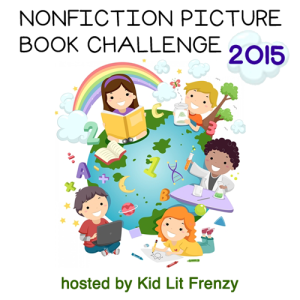 Our reading theme for November – December: The Butler Did It! MysteREADventure! 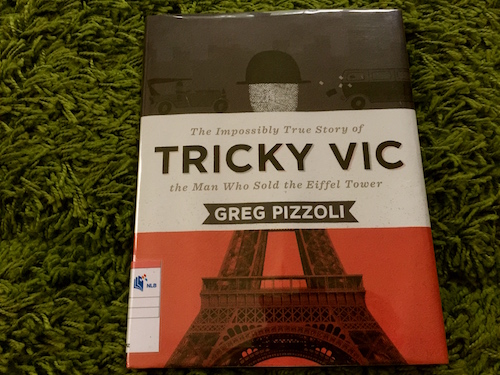 Tricky Vic: The Impossibly True Story Of The Man Who Sold The Eiffel Tower

Written and Illustrated by: Greg Pizzoli
Published by: Viking, 2015
Borrowed from the Jurong West Public Library. Book photos taken by me.

The entire world is still reeling with what has happened to Libya and Paris (and apparently, in quite a few cities as well over the past several months such as Cairo Egypt, Amman Jordan, Dhaka Bangladesh, Ankara Turkey). Perhaps it would be good to get into the mind of the ‘other’ to find out what motivates them to do the unthinkable. I thought that this week would be the perfect time to share the story of the man who had the audacity to “sell” the Eiffel tower.

This picturebook biography has been receiving quite a bit of love from a number of book bloggers recently, and I could understand their fascination after I have read the book. In the tradition of movies such as The Talented Mr. Ripley or Catch Me If You Can, this book tells the life story of a man named Robert Miller born in the Czech Republic in 1890.

One thing that caught my eye in particular in the first few pages of the book was how Robert Miller, who eventually adopted the pseudonym Count Victor Lustig or simply Tricky Vic, was described as a gifted student:

As a young man, Robert Miller was a gifted student with a seemingly bright future ahead of him. He was fluent in several languages, and his father urged him to study hard and complete a degree at the University of Paris, But, before finishing his studies, and against his parents’ wishes, he left home to become “an artist.”

As a teacher educator specializing in gifted education and high ability studies, this fascinated me to no end. It also reminded me of the movie 21 which featured highly gifted students from MIT who chose an alternative path. 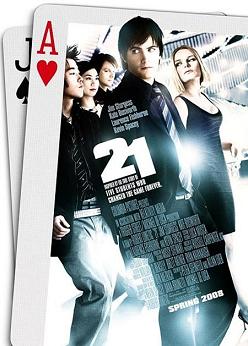 Evidently, Robert Miller was persuasive, charming, and seemingly without remorse as he carried out his brilliant heists – from counterfeiting money to conning Al Capone himself in the US during the time of the prohibition ..

.. and his most daring venture for which he became famous: convincing five successful scrap metal dealers in Paris that the Eiffel Tower was being dismantled and they have to bid for the rights to do it. 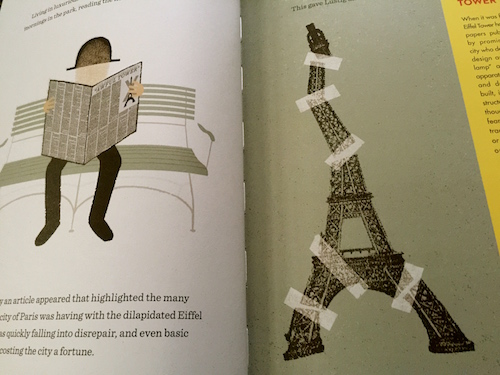 While most of the picturebook biographies I shared here have to do with heroic individuals or humanitarians who devoted their life’s work to making the world a better place – here is one book that showed the other face of genius. I also enjoyed Pizzoli’s art where Tricky Vic’s visage was portrayed throughout as a thumbprint – an ingenious metaphor for the many identities that Robert Miller assumed in his lifetime. I anticipate this nonfiction picturebook winning quite a lot of awards next year. Definitely a must-find.