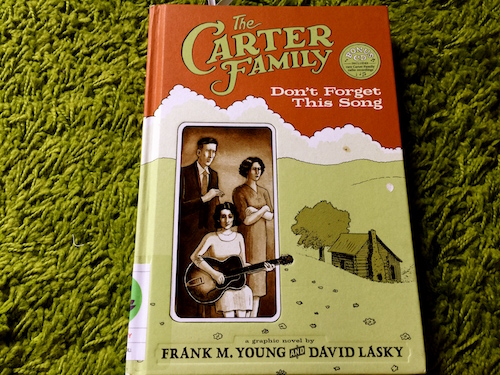 I was initially drawn to this title because it claims to trace the roots of country music to The Carter Family and how they influenced most of my favourite singer-songwriters. My daughter (who turns 14 this year) is also studying Music making this even more of a personal read for me with all its journey of triumphs and travails, pathways to stardom and success, and what it takes to make it in the music business.

The Carter Family’s music influenced many other greats: Woody Guthrie, Hank Williams Sr., Bob Dylan, Lucinda Williams, the alt-country scene, the folk revival of the 1960s… From Guthrie’s rousing “This Land Is Your Land” to Dylan’s “Blowin’ in the Wind,” the influence of A. P. Carter’s song craft cuts a deep swath through all American music. 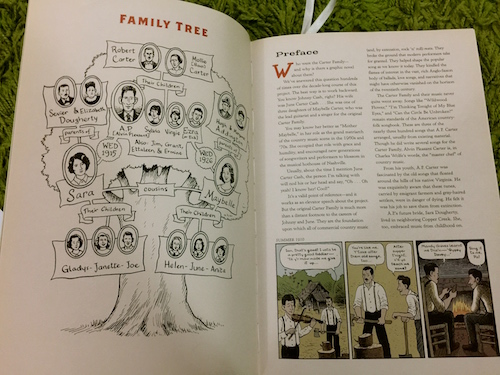 While the intention was definitely admirable, I felt that there was something lacking in the execution. Despite this family tree, I struggled with all the names and characters included in the story, particularly in the middle and towards the end when all the children are grown up. I also sensed that the distinct dialect in which the narrative was written (with its deep country-folk-vibe) also made it a tad difficult for me to fully understand right away what was going on in the story. If you find yourself re-reading several times to make sense of the narrative, then it makes it doubly difficult to connect with the characters which remained flat and unidimensional for me throughout.

What impressed me though, and what remained salient for me as I was reading this story, was how deeply committed A. P. (Alvin Pleasant) Carter was in making music, to the detriment of the general well-being of his family. He would travel to far-away places to seek out songs that have been passed down from one guitar-folk to another, lost through the ages if not for his painstaking documentation and recording of the songs. 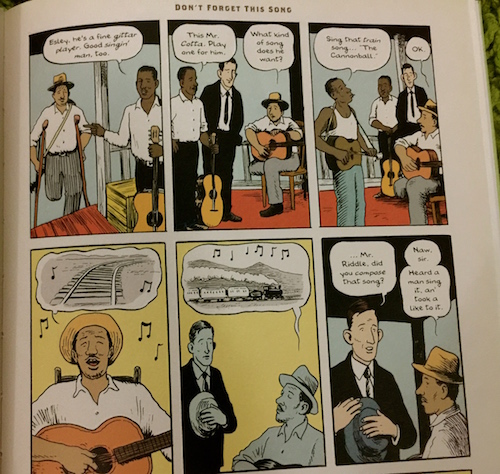 However, it was also shown how these ordinary folks remained unacknowledged throughout The Carter Family’s illustrious career as they had the misfortune of being managed by a man who took advantage of their lack of know-how in the business – once again a cautionary tale for modern readers. There were also certain sections that were shown in mono and appeared like comic-strip vignettes of what was happening to the Carters – but this was not really elucidated in the Afterword, with no mention of the author/illustrators’ intention of inserting these somewhere in the end of the story.

Despite this, I felt that it remained an interesting read about a family driven to eventual dissolution as brought about by the single-minded pursuit to make music. I was able to find youtube clips of The Carter Family singing their hit songs Wildwood Flower and Keep on the Sunny Side. Enjoy!

Winner of the 2013 Eisner Award for Best Reality-Based Work