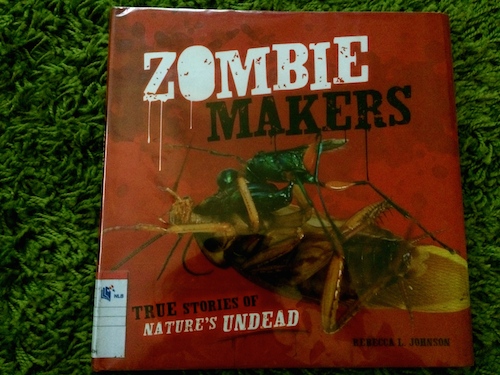 We are excited to join Kidlit Frenzy’s Nonfiction Picture Book Challenge. We would also be linking our nonfiction choices with our reading themes throughout the year. For November-December, we are featuring Paranormal Fantasies: Dragons and Unicorns, Vampires and Elves.

This book clearly is a perfect fit for the paranormal bit of our theme.

When I saw this book being shared by fellow Nonfiction Wednesday enthusiasts, I knew I had to find it for myself as it is perfect for our current paranormal theme. How much more otherworldly and creepy can you get with zombie insects and nature’s undead? Plus, I love my my World War Z and my Walking Dead TV series. The Strain seems like an acquired taste, but I am enjoying its fast pace.

In keeping with the title, Johnston has enumerated several zombie traits and linked them to manifestations of similar traits among insects – and organized them into mini-chapters filled with photographs such as the one you see above. She has managed to make something that could potentially be snooze-inducing to something really fascinating with the references to what is now perceived as pop culture. It was also a riveting read noting how infected ants, houseflies, cockroaches, caterpillars can be ‘controlled’ by their agents or ‘zombie makers.’ 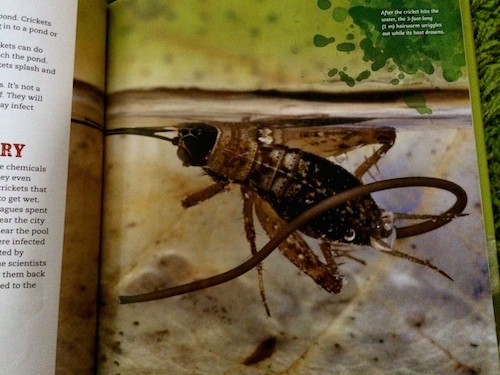 Johnston also includes a section called “The Science behind the Story” after each zombie tale and she also names the scientists who have been doing extensive work on these creatures, making them sound so interesting and so accessible to young naturalists or would-be-scientists.

Admittedly, it is this story about the guinea worm that has made my skin crawl. Zombie victims here are people from Africa, mostly, and I am glad to read that guinea worms have been slowly dying out over the years, thanks to brilliant scientists who have eventually figured out what makes them ‘tick’ (pun intended).

There are also stories that are quite familiar, particularly rabies among beloved creatures – although in this book, they only featured raccoons. In Candy Gourlay’s Tall Story, there was an unforgettable character in the novel who has been transformed by virtue of her being bitten by a rabies-infected dog. It’s the stuff of surreal tales and oft-talked about in hushed tones back in the Philippines – lots of potential paranormal tales there.

There is a brief author’s note found at the end of the book along with a glossary of terms. I also appreciated the very detailed list of selected bibliography that Johnston included, the links to various websites and videos, books, and the photo acknowledgments. Definitely a book that would make even the most reluctant reader want to flip through the pages. There is just so much about our world that is endlessly gripping and captivating. Where were books like these while I was growing up?