One of our special sections here in GatheringBooks is Quill Junior where we welcome book reviews done by children/tweeners. Today, I am glad to welcome my own 12 year old daughter, Myka Aaviela Bacsal who would be doing quite a number of book reviews for us in the following weeks. We would also like to invite other children contributors to share with us their insights about their favourite books, especially if they fit our current reading theme on “Black Holes and Parallel Universes: Marvels of Science and Speculative Fiction” until the end of October. 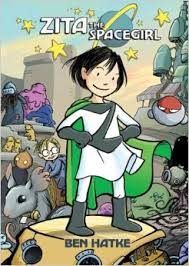 Another amazing children’s comics has captured my attention. Zita the Spacegirl is a series of three comic books, so far, by author Ben Hatke. This comic book reminded me a lot of Amulet by Kazu Kibuishi because they both talk about other universes and unlikely superheroes.

This story is about an adventurous and brave girl named Zita and her close friend Joseph. The story started when the two kids (Zita and Joseph) were running around the green fields until they saw this big hole. Zita was brave. She went inside and found a red button. Zita wanted to press the red button while Joseph said no and refused to touch it. Unfortunately, Zita pressed the red button, and that’s where the story finally begins. Joseph gets taken away by this creature called Screed. Zita followed him and realized that something was awfully weird. The red button teleported Joseph and her to a different dimension! In the comics, Zita tries to rescue her friend Joseph from the thing that kidnapped him. I thought it was really heroic of Zita to do this because most other people would just run away and be cowardly, but she felt responsible for her actions and her friend. Zita makes a couple of friends in her journey and had a wild adventure full of action, friendship, and survival.

The Return of Zita The Spacegirl

Zita strikes again with a third book. I must admit that I didn’t understand some parts because our library does not have the second book in the series yet. There were a couple of new characters I didn’t know about. In this story, Zita has been captured by the evil villains who took her in as captive because they thought Zita was doing bad deeds and accused her of being a “crime girl.”

In the prison cell, Zita has two very strange “cell buddies” – a skeleton and a blob. Zita’s cell mates helped her escape until this hooded figure came. The hooded figure helped Zita until he disappeared and Zita was caught again by the guards. Her friends from the first and second book gathered together to try and save Zita. Zita escapes and found the hooded figure. She asked him who he was and… I leave it to you to find out who this is. They managed to escape and Zita finds a crystal which can make them go back home to Earth, but there are complications along the way that they will have to face. Will Zita’s friends find her and save her? Will she and the hooded figure survive?

I felt that these two books are very enjoyable and action-packed and filled with adventure, and also take on big themes such as friendship, trust, and loyalty. I rate both of these books a 4.5 out of 5. 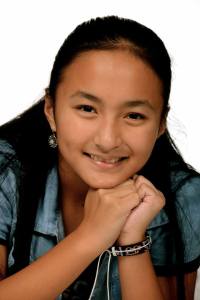 is a spunky 12 year old book nerd turning 13 this December. She loves to sing, play basketball, watch movies, and read books in her free time. She is a huge Goosebumps freak and enjoys reading graphic novels. She will be attending the Singapore School of the Arts as a Music student in January 2015.  If you want her to read and review comic books/middle grade/ young adult fiction, send us an email at gatheringbooks (at) yahoo (dot) com.

7 comments on “Quill Junior: Zita the Spacegirl and Her Return”