We are excited to join Kidlit Frenzy’s Nonfiction Picture Book Challenge. We would also be linking our nonfiction choices with our reading themes throughout the year. For September and October, we are featuring Black Holes and Parallel Universes: Marvels of Science and Speculative Fiction.

These two picturebook biographies that I found are in keeping with the beauty of nature and the bright minds who uncovered their secrets.

Written by: Jacqueline Briggs Martin Illustrated by: Mary Azarian
Published by: Houghton Mifflin Company, 1998
Bought my own copy of the book. Book photos taken by me.

I did not know about Wilson Bentley until I read this beautifully written picturebook biography. I am once again reminded of why I am in the field that I am (talent development, gifted education, high ability learners, high creatives) as I read about Bentley’s fascination with snowflakes, his doggedness in capturing their beauty (even if it eventually meant the death of him), and his determination to share their beauty to the world.

When he found only jumbled, broken crystals, he brushed the tray clean with a turkey feather and held it out again.

He waited hours for just the right crystal and didn’t notice the cold.

If the shed were warm the snow would melt. 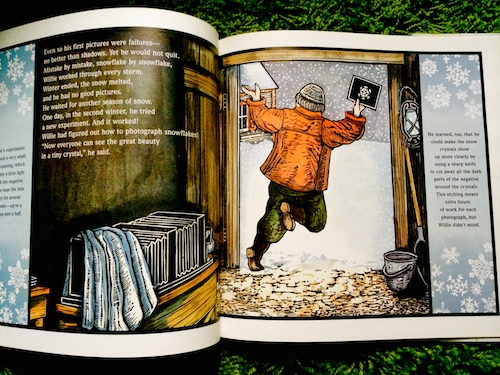 If he breathed on the black tray the snow would melt.

If he twitched a muscle as he held the snow crystal on the long wooden pick the snowflake would break.

He had to work fast or the snowflake would evaporate before he could slide it into place and take its picture.

I was deeply moved by his dedication, his hard work, his passion. Imagine falling in love with the beauty of something so transient, to be so enamoured by one that is fleeting in all its crystalline elegance. He did not earn anything from what he did, nor was he paid to capture photographs of snowflakes; in fact, it was deemed to be nothing special, as snow was perceived to be as common as dirt in Vermont. He spent around $15,000 on his work and received only $4,000 from the sale of his photographs and slides.

More pragmatic individuals would wonder why he did what he did, and the back matter included a wondrous quote from him:

The average dairy farmer gets up at dawn because he has to go to work in the cow yard. I get up at dawn, too. But it is because I want to find some leaf, hung with dew; or a spider web which the dew has made into the most delicate ropes of pearls… I take my camera with me, get down on my knees in the wet grass, and photograph these exquisite bits of nature.

Because I do this I can show these lovely things to people who never would have seen them without my help. They will get their daily quart of milk, all right. Other farmers will attend to that. But I think I am giving them something which is just as important.

Clearly, Bentley was not just a scientist. He was a poet too.

For teachers who wish to make use of this book in the classroom, here is a downloadable 23-paged extremely comprehensive PDF guide that includes a host of activities, links, discussion questions that may be used in the classroom.

On A Beam Of Light: A Story Of Albert Einstein

There is perhaps only a handful of people in the world who would not know the name of Albert Einstein, one of the greatest thinkers the universe has ever produced. This picturebook biography traces his story from the time that he was born “over 100 years ago” til the time of his death.

There were quite a number of pages devoted to Einstein’s delayed speech when he was a toddler:

There was also a detailed mention of how he did not fit in school and how his teachers even told him that “he would never amount to anything unless he learned to behave like all the other students.” 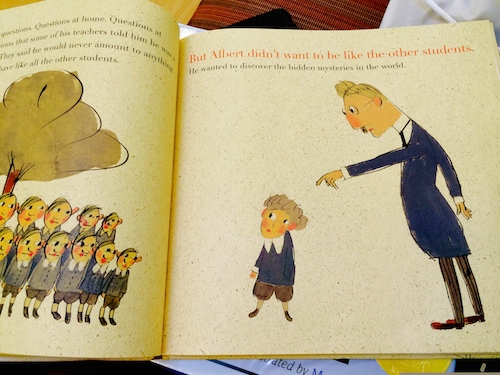 I especially liked how his earlier difficulties and struggles were shown, as it demonstrated that life had not always been easy for the young Einstein and that his success happened despite of (or even because of) the way that he was perceived and treated by his teachers.

Despite the fact that he was clearly different from everyone else, Albert loved to wonder about the nature of things. I like how this book captured the two pivotal moments in his life: when his father gave him a compass that allowed him to wonder even more about the universe, and that moment when he was “zipping through the countryside on his bicycle” and stared at the beams of sunlight reaching the earth.

I especially liked how he was shown to be an insatiable learner; that he was not content with just asking questions, he was determined to discover the answers that continue to elude him by reading as many books as he can …

and submitting his discoveries to scientific journals and magazines, until finally people started taking notice of his ruminations and numerical way of solving his wonderings about the universe.

One of the reasons why I was also drawn to this version of Einstein’s biography is Radunsky’s art. It is boundless, brimming with experimental energy, and essentially fearless with its bold strokes and total randomness. Yet, there is order and meaning in this seeming-chaos. I believe Einstein would have been pleased.

Teachers would also be happy to note that there is a detailed back matter that includes Einstein’s brightest ideas as well as additional resources that can be explored by avid researchers. For teachers who wish to make use of this in the classroom, here is a Weebly site that contains quite a number of downloadable PDF resources which include lesson plans, learning contracts, and even rubrics!

Several years back, Fats has done a comprehensive review of Don Brown’s version of Einstein’s story in Odd Boy Out. You may want to click on the image below to be taken to her review:

5 comments on “[Nonfiction Wednesday] Beams of Light and Snowflakes”