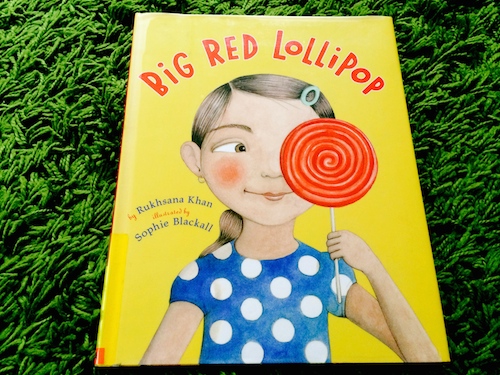 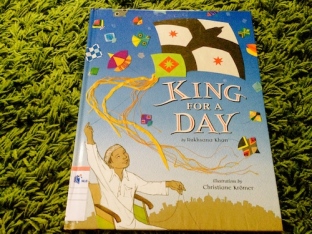 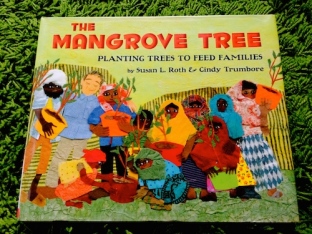 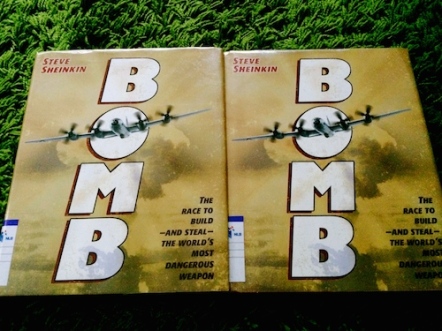 Click here to sign up. If you have already signed up, here is the April-June linky where you can link up your reviews or updates from your reading list. We are also very excited to share that Pansing Books will be giving away copies of Julian Sedgwick’s Mysterium: The Palace of Mystery to two lucky CORL participants from April-June. So link up your posts now! 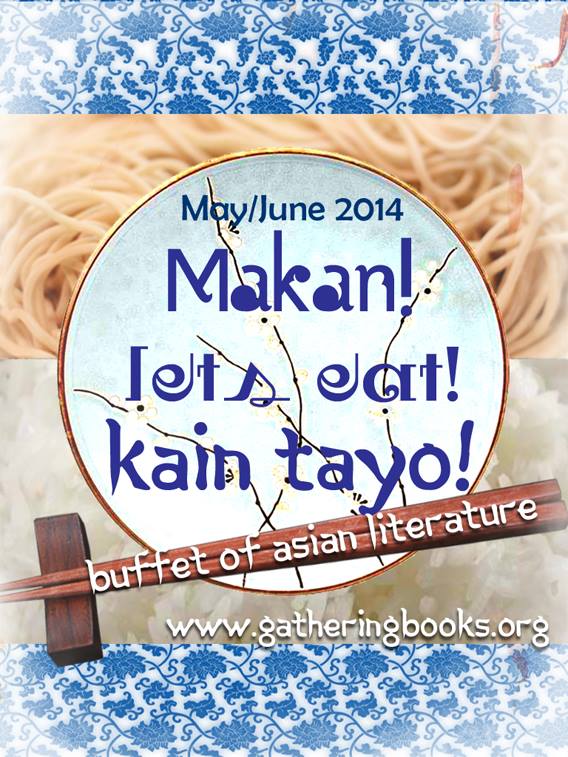 I deliberately hunted for these two picture books as they were mentioned specifically in Naomi Kojima’s chapter in my edited book which will be launched during the Asian Festival of Children’s Content (AFCC), 2 June, Monday, 2-230 pm, entitled One Big Story. 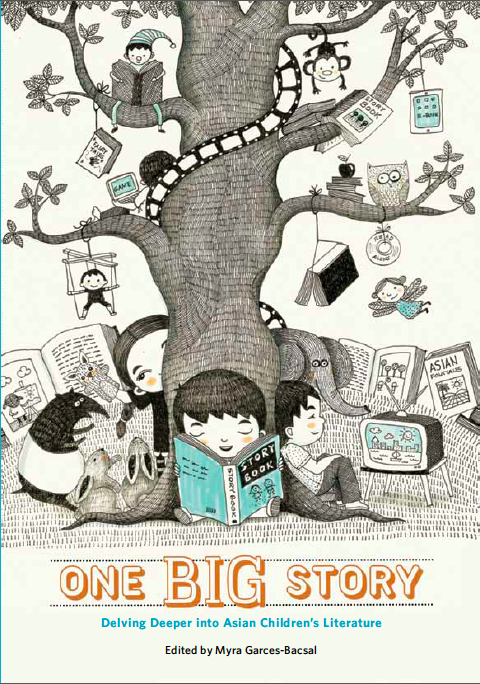 Last year, during the Asian Festival of Children’s Content, Naomi talked about Asian illustrators whose art has reached the world. She spoke about it in even greater detail in her book chapter, and she wrote lovingly of these two picturebooks, so I thought of sharing them all with you here. 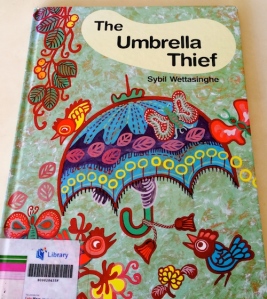 Written and Illustrated by: Sybil Wettasinghe
Published by: A Cranky Nell Book, Kane/Miller Book Publishers, 1987
Borrowed from the library. Book photos taken by me.

The setting of this book is in a small village on the island of Sri Lanka. A man named Kiri Mama lived in this village. When Kiri Mama wento to town for the very first time in his life, he was very curious about the varied sights and sounds that welcomed him.

He was particularly intrigued by the flower-shaped things that so many people were carrying as they walk about town. And he discovered that these beautiful things, green, red, yellow, blue – are called umbrellas used by the people to protect themselves from the sun and the rain. This fascinated Kiri Mama to no end.

And so, after much deliberation, he finally bought one for himself. He was so delighted with it and he was sure that he would be the envy of the people from his hometown. When he reached his village, he stopped by a coffee shop near the bus stop, making sure that he does not make mention of his most prized possession.

He wanted to show it off during the full light of day, and so he hid the umbrella behind the wall before he entered the shop. But lo and behold, his umbrella was gone when he finally went outside. He was perplexed by this and so he decided to head to town once more to buy another umbrella.

When he stopped by the coffee shop to have a drink again on his way home, the same thing happened. Another umbrella lost, and another and another. Who could be stealing these lovely flower-shaped things and what does the thief want with so many of them? I leave that to you dear readers to discover.

I love the artwork in this picturebook. The bold outlines, the brown hues, the profiles of the people, and the oh-so-familiar sights and seeming-sounds. Even the so-called coffee shop has the flavor of what we call a carinderia in the Philippines. It is also a celebration of life’s simple pleasures with an added mix of mystery and sleuthing thrown in. For teachers who wish to make use of this in the classroom, here is a Resource Unit for K-6 Students on Sri Lanka prepared by Laurie Goode, Jennifer Litts, Megan McFadden – which includes The Umbrella Thief as one of the reading materials.

Written and Illustrated by: Chih-Yuan Chen
Published by: Gecko Press, 2003
Borrowed from the library. Book photos taken by me.

The story begins with an egg rolling along the ground from who-knows-where. This resilient, seemingly-goal-directed egg finds its way right into a duck’s nest filled with other perfectly-formed white eggs.

One would think that Mother Duck would notice this strange-looking, extra large, spotted-brown egg that found its way into her nest; but she did not seem to particularly mind or notice anything amiss. She was busy reading. I love this Mother Duck. She knows her priorities.

When the eggs finally cracked, Mother Duck called the one with blue spots Crayon, the one with the brown stripes was named Zebra, while the yellow duckling was called Moonlight. The strange looking one that popped out of the extra-large egg yelled “Guji Guji” as soon as he was freed from the confines of his shell, and so that became his name.

Mother Duck then went on to teach her beloved children the fundamentals of what it means to be a duck: swimming, diving, waddling. Guji-Guji was a fast learner. He also seemed faster and stronger than any of his other siblings.

But no matter how quick they were, or what they looked like, Mother Duck loved all her ducklings the same.

Isn’t that line beautiful? I think that is what made me fall in love with the book. Then one day, three crocodiles slinked out of the lake and laughed at this little crocodile who walks and talks like a duck. They told Guji-Guji in no uncertain terms that he is a predator, that his pointed teeth and sharp claws are made to eat and relish fat delicious ducks.

Guji-Guji now faces an existential dilemma. Is he a duck or is he a crocodile? Would he embrace his true nature and do what the crocodiles ask him to, or would he go on waddling like the duck that he thought he was? What Guji-Guji does, I shall leave for you to discover.

This picturebook is an excellent demonstration of unconditional love, the power of nurture versus nature, and the multi-varied ways one is able to define one’s self to know one’s place in the world. For teachers who wish to make use of this in the classroom, here is a downloadable pdf resource created by the publishers that includes discussion questions and extension activities that can be used with the book.

I haven’t made much progress with my reading during the last week as I traveled from Singapore to the Philippines last Friday and will be in Manila until 30th in the evening. I did bring a few companion books with me and am still in the thick of reading the following:

I am nearly done with The Raven Boys by Maggie Stiefvater. It is a surprisingly great read, and I am loving the discussions on energies, spirits, ley lines. Not very keen on the love triangle bit, but it’s not as bad when compared to other YA novels. 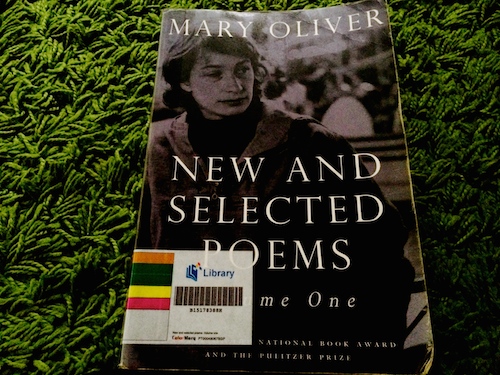 I also brought Mary Oliver’s New and Selected Poems: Volume One with me. It would be a great read as we visit the beach later this week.