I borrowed this book from the library a year ago, but was not able to finish reading it. I vowed to go back to it at some point. I am glad I picked it up again from our library for our current theme until end of April, as it features the voice of a young prodigy in the person of Tecumseh Sparrow Spivet, otherwise known as TS.

I don’t know if it is because the protagonist is a young science genius and brilliant mapmaker that made me appreciate the novel, despite its daunting thickness. I find myself naturally gravitating towards stories of outliers, particularly those in the farthest-high-end of the bell curve because of the courses that I teach in our university on high ability learners, gifted and talented individuals, and the creatives.

… there was never a map that got it all right, and truth and beauty were never married to one another for long. (p. 16)

The Asymptotes, Longitudes and Latitudes of Human Relationships. TS is not the typical 12 year old boy who loves rough-and-tumble sports or playing online video games with virtual friends. He is a collector of data and documents them fastidiously in his color-coded notebooks: red for insect anatomy, blue for his sociological observations of people doing things, and green for his zoological and topographical maps. There is no information perceived as trivial – every simple mundane task is described in full illustrated detail along with TS’ observations. 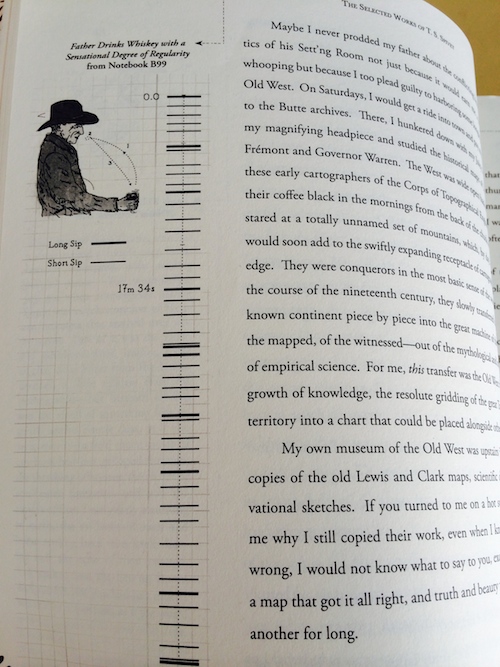 Case in point would be a graphical representation across a specific timeline of how TS’ Father drinks his whiskey with such regularity that TS can actually detect patterns in between long sips and short sips (see illustration above). True to form there are impressive sidenotes and doodles, charts and diagrams in addition to the actual narrative. Nothing escapes his keen eye for detail. I find that it is this young man’s way of staying connected to a land that alienates his scientific sensibility and his meticulous methods of inquiry. He knows that he and his father, a cowboy from Montana, are worlds different. This mapmaking provide him with a semblance of structure, a tenuous attempt to make sense of his world: description and prediction (with drawing of inferences and establishing cause and effect thrown into the mix). He was, however, unable to predict his younger ten year old brother, Layton’s accidental death with an 1886 Winchester Short Rifle, a tragedy that continues to haunt him and the rest of his family: his cowboy father, his older sister Gracie who is unabashedly a regular teenager, much to the consternation of their scientist mother, Dr. Clair Linneaker Spivet in search of the elusive tiger monk beetle. And so the patterns of interaction among family members have changed considerably since Layton’s death as can be seen in the map below.

Layton’s death also constitutes the large unknown, a terrain that is rarely, if at all, traversed by the Spivet family. And this is also a layer that would gradually be unraveled throughout the story.

Of Stenpocks and Teachers of the Gifted. I was taken by this quote from TS when he described a teacher who apparently found it quite difficult to understand him:

As this is my area of specialization, it is a good reminder to reflect on our teaching practices and whether we are threatened or energized by the presence of students like TS in our classrooms. Or whether we behave like Stenpocks most of the time.

The Journey to Washington. When TS received a call from the Smithsonian informing him that he was selected to be a recipient of the immensely prestigious Baird Award in Washington, this is when life began to change for the young Sparrow. It was his mentor and his mother’s colleague in the university Dr. Terrence Yorn, who submitted TS’ portfolio to the Smithsonian for consideration. And since TS has been creating highly complex insect diagrams for exhibits at the Smithsonian, his amazing work published in reputable journals such as Science, Scientific American, Discovery, Sports Illustrated for Kids, it was not surprising that he was given the award. Except for the fact that the Smithsonian does not know he is only 12 years old. Therein lies the rub, as Hamlet says.

What complicates matters further is that TS’ parents are unaware of his connection with the Smithsonian, and so he could not ask for their help. TS also felt betrayed by his once-trusted accomplice Dr. Yorn who submitted his work without even informing him. As he feels even more disconnected from both his parents, and from the very land where he was born, TS felt that he should hobo his way into Washington. He would “ride the rails” and go on a railroad adventure.

It was, undoubtedly, a very dangerous trip from Montana all the way to Washington with only a pocketful of dollars, a heavy luggage, and some big dreams for a young man who has never been away from home. He met quite a few interesting characters, several downright nasty and murderous, along his journey.

There was one who particularly stood out for me, though: racist Ricky. I thought of mentioning him given our current bimonthly theme. Truckdriver Ricky feels that the US should put up fences to keep out immigrants and people from other countries: “If you let some of them in, then how you gonna know who to trust, you know what I’m saying?” This diatribe, of course, is peppered with a great deal of cursing and animated hand gestures. I also loved how TS made sense of his encounter with Ricky:

I am embarrassed to admit this, but even though I was pretty sure most of what he was saying was very racist and very bad, I kind of liked Ricky. For a man with such menacing tattoos, he was surprisingly attentive: he kept asking how I was feeling, all the while offering me a steady stream of beef jerky, Capri Sun, and Advil. There was something comforting about the constant, husky prattle of his voice, punctuated by spits into the Flintstone thermos and the occasional self-induced guffaw. I wasn’t listening to his words, I was just clinging to the saferoom-feeling of the cab. Was this bad? What happens when the words are bad but the feeling around the words is good? Maybe I should’ve told him to shut up and gotten out of the cab right then and there, but I was so tired and it was so warm inside… (p. 275)

On Female Scientists and Rugged Terrain-Bound Men. Another aspect of the novel that fascinated me to no end was the character of Emma Osterville, the geologist wife of Tecumseh Tearho Spivet, TS’ great-great grandfather – as seen through the eyes of TS’ mother, Dr. Clair Spivet. When TS left home, he “stole” one of his mother’s notebooks, thinking that it would provide him with some clue as to his mother’s fascination with the elusive tiger-monk beetle only to discover an entirely different world altogether. In the notebooks labeled EOE, the empiricist Dr Clair Spivet was reconstructing the life of her husband’s great grandmother, one of the first female geologists in the country, who decided to marry a Spivet man, a signalman, also a cowboy inextricably bound to the land. 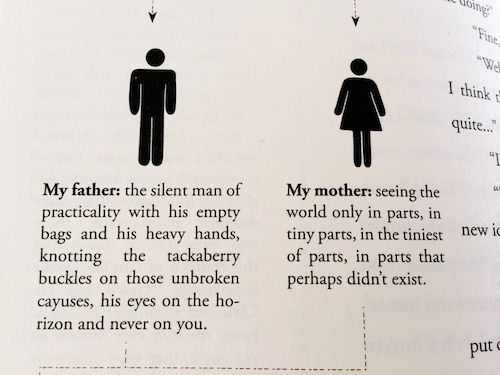 This diagram clearly shows how this is a cause of puzzlement for young TS who can not fathom how two very different individuals could have fallen in love with each other.

I knew that two people fell in love not simply due to the confluence of their respective disciplines, but why then in our family, time and again, had a woman of empiricism fallen for a man completely outside her field, a man whose profession was guided not by theories or field data or an artist’s sketch but by the heavy handle of a sledgehammer? Was a common disciplinarity actually repulsive, like magnets of the same polarity? Did the true, umbilical love that bound people together for the length of their lives require a certain intellectual dislocution in order to push past our insistent rationalization and enter the rough, uneven space inside our hearts? (p. 243)

As TS reads his mother’s reconstruction of another female scientist who has fallen in love with a Tecumseh as well as her marginal notes, TS begins to ask himself whether his mother is a writer/a novelist rather than a scientist. At one point though, it is also clear that evidence or the burden of proof does not matter as seen here: 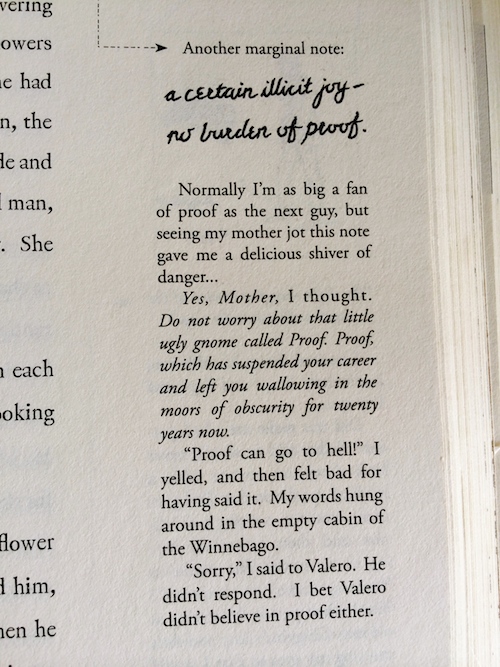 Since making my first maps of how to shake hands with God, I had learned that the representation was not the real thing, but in a way this dissonance was what made it so good: the distance between the map and the territory allowed us breathing room to figure out where we stood. (pp. 56-57)

Endnotes. I shall leave it to you to discover whether TS eventually arrived in Washington DC. Suffice it to say that I was enamoured by this book. Admittedly, it is not a book for everyone. Some may be impatient with its meandering narrative that takes its sweet time in arriving at its destination. TS’ voice may sound too learned to be believable even as a young 12 year old prodigy. Yet, it is more than just arriving at Washington and claiming the recognition that he rightfully deserves that is the essence of the narrative, but that too was extremely important; it was also TS’ journey towards redemption, as he makes sense of his brother’s death. A way through which he punishes himself, a form of self-flagellation that eventually led to his own deliverance.

The Selected Works of T. S. Spivet: A Novel by Reif Larsen. Published by Penguin Books, 2009. Book borrowed from the public library. Book photos taken by me.