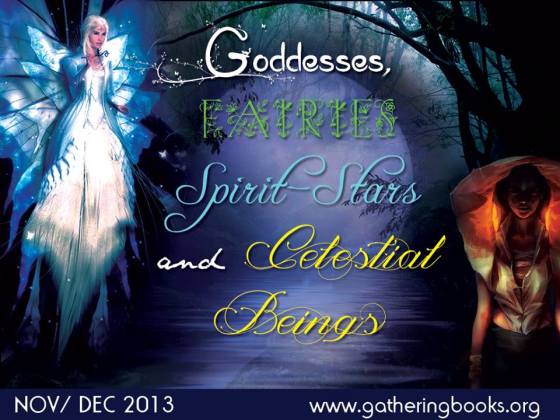 I borrowed all these books from our public libraries with the full intention of reading them during the Christmas break. However, I am slowly beginning to realize that there are only 24 hours in a day, and I wouldn’t be able to really enjoy all these as much as I would like to. This does not mean, though, that I shouldn’t share these titles with you. I am sure that a lot of parents or teachers who would like to introduce these heroic stories and myths to their kids would find joy in these glorious books . 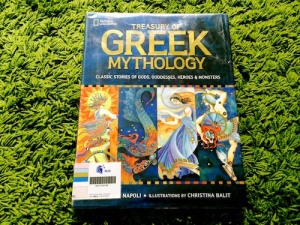 This is a fabulously-illustrated reference book on Greek gods and goddesses. Each mini chapters talk about specific gods who are introduced by full page colourful spreads that feature the said god or goddess in all their eternal glory, as well as what they are known for (e.g. God of Wine, Goddess of Love and Beauty, etc). 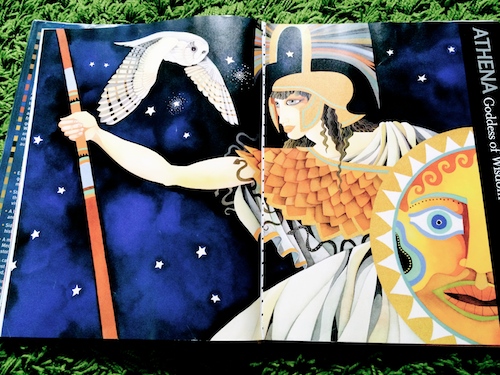 I also enjoyed seeing this illustrated Olympus Family Tree that shows the primary connections among the gods. While hardly exhaustive, it provides a snapshot of the significant deities in Olympus. 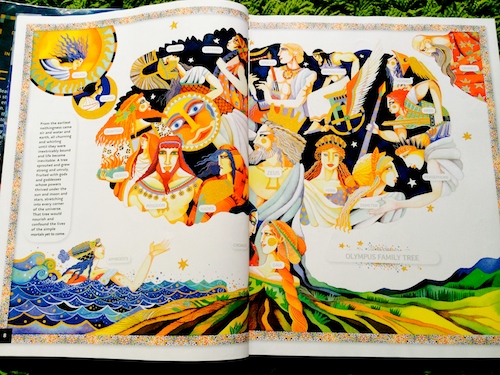 Here are among my favourite illustrations from the book: 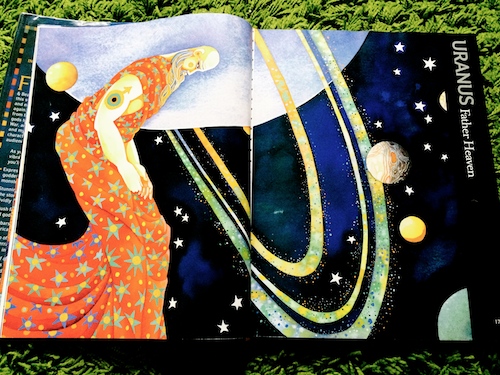 Father Heaven who was eventually killed by his own son, the youngest of the Titans, Cronus. 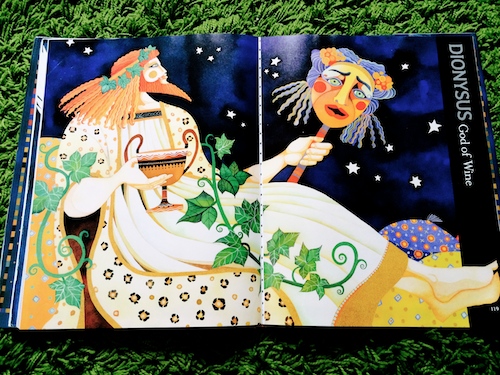 The God of Wine, Dionysus. The god of revelry and drunken parties.

Grandfather Mountain: Stories of Gods and Heroes from Many Cultures 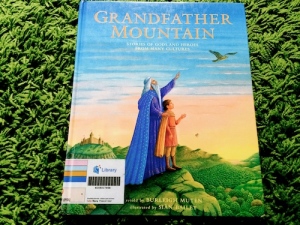 Retold By: Burleigh Mutén Illustrated by: Siân Bailey
Published by: Barefoot Books, 2004
Borrowed from the library. Book photos taken by me.

There are eight stories included in this collection of tales about gods and heroes from various cultures. In the Introduction, the author signified his intention as to why he compiled these narratives and connected it to the symbol of the grandfather as the fountain of wisdom and knowledge:

Grandfather is the powerful elder who guides boys and men through the ages. he is the great teacher whose knowledge extends beyond bravery and strategy. He is the one who knows the importance of keeping the balance of nature. He is most certainly the ready warrior, and he is also the patient sage. We look to our grandfathers for their experience and for their vision, which span wider horizons and greater lengths of time than our own.

The collection begins with “Grandfather Mountain” from North America 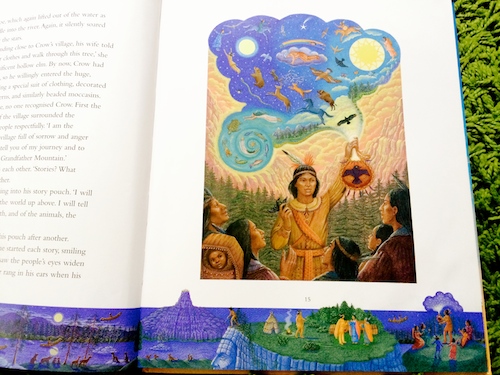 followed by stories from Nigeria, New Zealand, and Mexico.

This image is reminiscent of what I shared from the D’Aulaires Myths books here.

There are also stories from Greece, England, Japan, and Ireland. 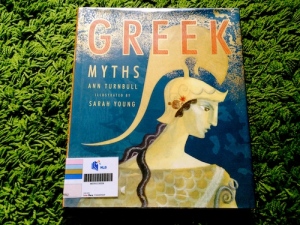 Retold by: Ann Turnbull    Illustrator: Sarah Young
Published by: Walker Books, 2010
Borrowed from the library. Book photos taken by me.

I know there is still a whole lot more that I don’t know about Greek myths despite my having read D’Aulaires’ Book. If I had nothing but time on my hands, I would have devoured this gorgeously-illustrated book.

This book is divided into three major sections. Unlike other Greek myths that begin right away with the major gods who live in Mount Olympus, this book is structured a wee bit differently. In Earth, the Heavens and the Underworld, the stories of Arethusa, Persephone, Orpheus and Eurydice and Phaethon are told. 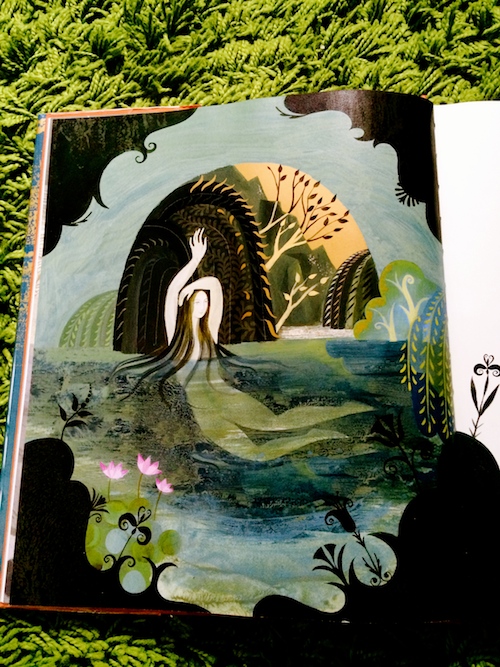 Monsters and Heroes feature the likes of Ariadne, the Minotaur, Atalanta’s Race, Perseus and the Gorgon’s Head, and Bellerophon (I would have wanted to have known Pegasus better if I had more time). 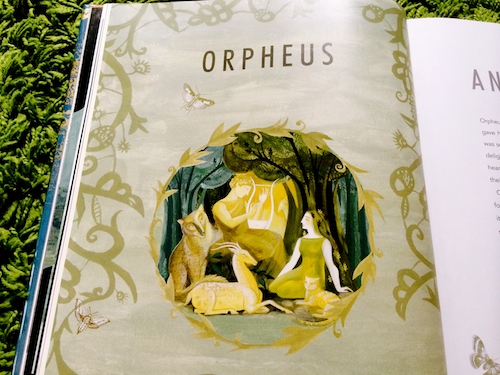 Last section features Gods and Mortals with Pan and Syrinx, two stories from King Midas, the story of Pandora, and Echo and Narcissus to name a few. 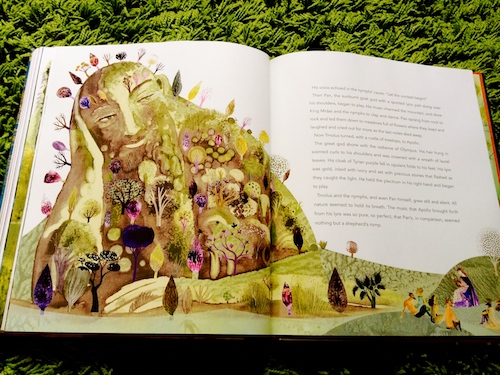 I am especially awed by the illustrations here as you can see above. Sarah Young seems to be such a talented artist.

The Usborne Book of Greek Myths 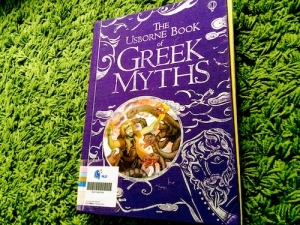 Generally, I love books published by Usborne. This one is a tad daunting with its thickness. Part One talks about the birth of the gods, how seasons came to be, there was also mention of Jason and the Golden Fleece, Icarus, Atalanta and her golden apples, Orpheus, and Achilles. 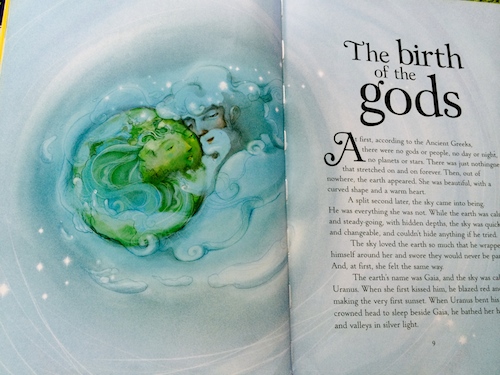 Since I did not have the luxuty to read all the stories here, I read only a few of the tales that I didn’t find in the D’Aulaires’ collection. I enjoyed reading the love story of Eros and Psyche. Even the Adventures of Odysseus can be found here. I know that a few of the compilations I read tried to veer away from Odysseus’ adventures at sea since as was pointed out in the Turnbull and Young book, they deserve a book on their own. It’s great to see a condensed version here. 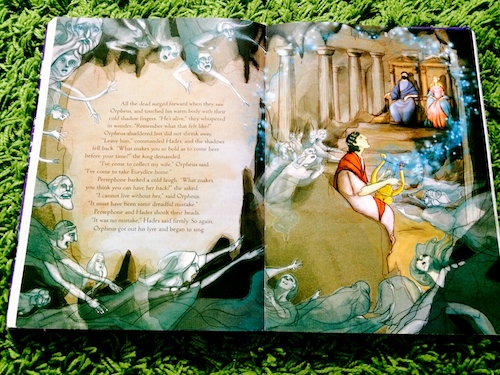 Part Two is considerably shorter as it is a shortened guide to the Greek myths, a map of Ancient Greece and the Mediterranean, and a helpful glossary of Zeus’ many offspring and the various nature gods and spirits.

Do you have other titles that you would like to add to this list? We would be happy to hear them.

1 comment on “More Books on Myths, Gods, and Heroes”