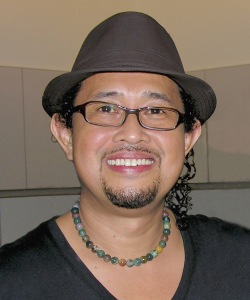 One of the reasons why we asked Danny Castillones Sillada to be our featured guest for our current bimonthly theme Oddballs and Misfits, the Surreal and the Peculiar: A Celebration of Beautiful Strangenesses is primarily because of his surreal artwork. In this post, you would be able to get to know more of Danny’s creative process and his fantastical imaginings.

Landscape of Thoughts and Images: Beyond the Mind of An Artist – Danny Castillones Sillada

“ ‘Beyond Realism,’ as surrealism implies, requires a good grounding in realistic art—it is, a fortiori, a multi-dimensional creation of all reality perceived by the artist. This aspires to create more ‘realities’ than the eye can see. As an aesthetic experience, it tends to be more cerebral than visual. But objectified representations of reality (as those in photographs) is within the province of surrealism as it disfigures reality to discover other realities that more often than not ‘surprise the beholder’ into recognizing more planes of reality,” says a Filipino-Canadian poet, fictionist and critic Albert B. Casuga.

“Danny Castillones Sillada,” he continues, “is definitely a skilled surrealist.”

In a lifestyle magazine based in Dubai, Shar Matingka wrote, “Danny Castillones Sillada has established himself as a neo-ethnic artist, his masterpieces overflowing with vibrant incoherence, transcending movements spawned from legacies of surrealists. Not many of our contemporary artists can recreate a poetic replica of a disjointed reality captured on canvas as Sillada can, and that too with such wild abandon… Minds are left bewildered and slightly disturbed yet visually gratified—these are some trademarks of Sillada’s work of art.” (Illustrado, November 2008 issue)

Perhaps, the combination of surrealism (as a visual artist) and existentialism (as a philosopher) is what makes Sillada a unique voice not only in the Philippine art scene, but also among the contemporary Asian artists and thinkers. His surreal images either on canvas or on digital works is not born out of random appropriation of symbolic elements: they spawn and generate from a rational and well-structured mind of an artist-thinker with educational background in philosophy, literature, theology, and business management.

As a multidisciplinary artist, he was hailed “as the embodiment of a Filipino who defies the existing trend. His multi-faceted attribute in the humanities, as a Renaissance man, is identical with those of well-rounded historical figures during the Renaissance period in Europe. Sillada is a visual artist recognized in the Philippine art scene for his paintings and installation artworks, a literary writer who is into prose and poetry, a philosopher, whose writings are akin with existentialism, a first-rate performance artist, and also an art-critic.” (From a 2006 research paper titled “Danny C. Sillada: The Filipino Renaissance Man,” submitted to the University of Asia and the Pacific by Michael Marlowe Uy and Katrina Kalaw)

Dr. Reuben Ramas Cañete, PhD., a Filipino art critic and professor in Humanities at the University of the Philippines aptly describes Sillada as an artist of expressive potential and autobiographical force.

According to Cañete, “Sillada’s art represents not some fancified, soulless object that injects its complicity within the arrogated space of the dictating decorator, but as a liberating device that explores the depth of his tortured subconscious by exploring the relationship between symbolism and experience… The resultant images are culled from manifold, eclectic sources, as diverse as his biographical experiences, and the polyglotality of the embedded culture of the Mindanaoan. (A monograph on Danny C. Sillada and the Metaphors of Dreams and Existence exhibit: 1999-2000)

As a philosopher, Sillada is the embodiment of the new generation of Filipino thinkers who is not confined in the academe, a critic of culture and a philosopher of humanity, advocating social justice and moral responsibility in relation to the highest good of the society. He writes within the scope of existentialism, metaphysics, theology, phenomenology, epistemology, language and linguistic theory, and experimental philosophy and psychology.

The following surreal images and excerpts from his published philosophical essays convey what is inside the mind of a Mindanaoan artist who, not so long ago, left his vocation to the priesthood and a promising career in the corporate world as an executive in order to embrace his art. 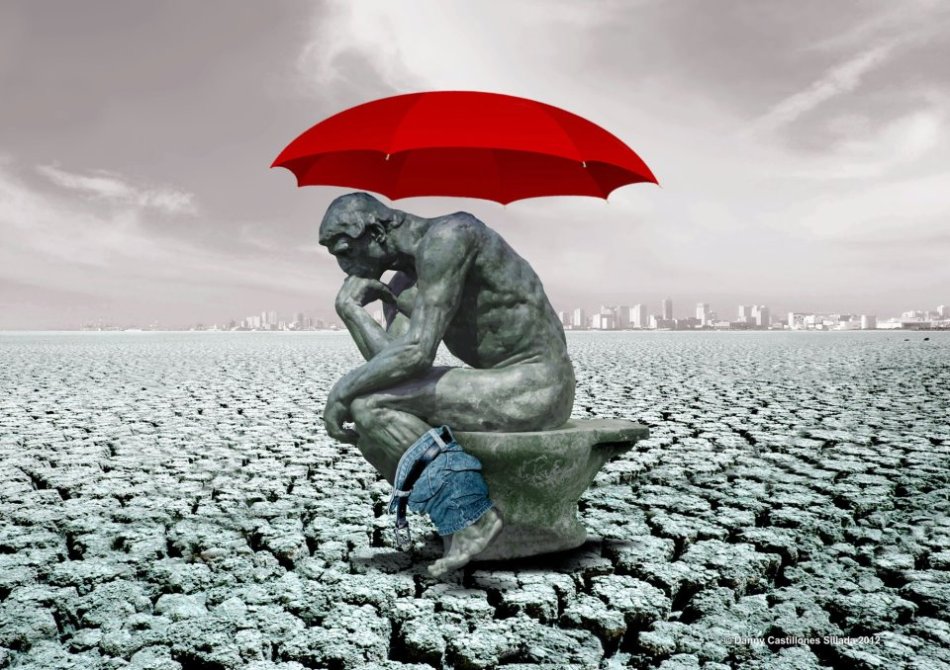 At times, human mind can be torpid when it comes to exploring new concept or idea. It closes its door to all possibilities and sits comfortably within its own system of thoughts or beliefs. Instead of maximizing the cognitive power to understand and discover the uncharted realities of the world or the universe, the psychological mind clings to the casuistic and ready-made answers on things that are beyond its empirical experience.

Is the human mind capable of departing away from its comfort zone of comprehending all facets of truth, or is it too defiant to adapt the changing reality of our present world?

Without compassion, language cannot emphatically feel what is inside a person who is despairing.  The silence of a broken man or the lament of a grieving mother is inexpressible in language, and it is only through human compassion that one can feel and understand the inner ‘torment’ of other souls. Language can persuade, manipulate, or dictate what it wants us to believe, but compassion brings and reconciles us to other beings in love, humility, respect and understanding.

When language fails to commune the human thoughts and emotions, silence becomes a necessity to meditate upon the unspoken. When verbal or written words placidly settle in propitious impasse, when bodily sounds and gestures slowly abate in calm surrender, when quietude resonates with the gentle beatings of human heart – it is then that silence tiptoes carefully between the sublime encounter of two souls. This kind of encounter is a compassionate encounter in Grace, Truth, and Beauty. 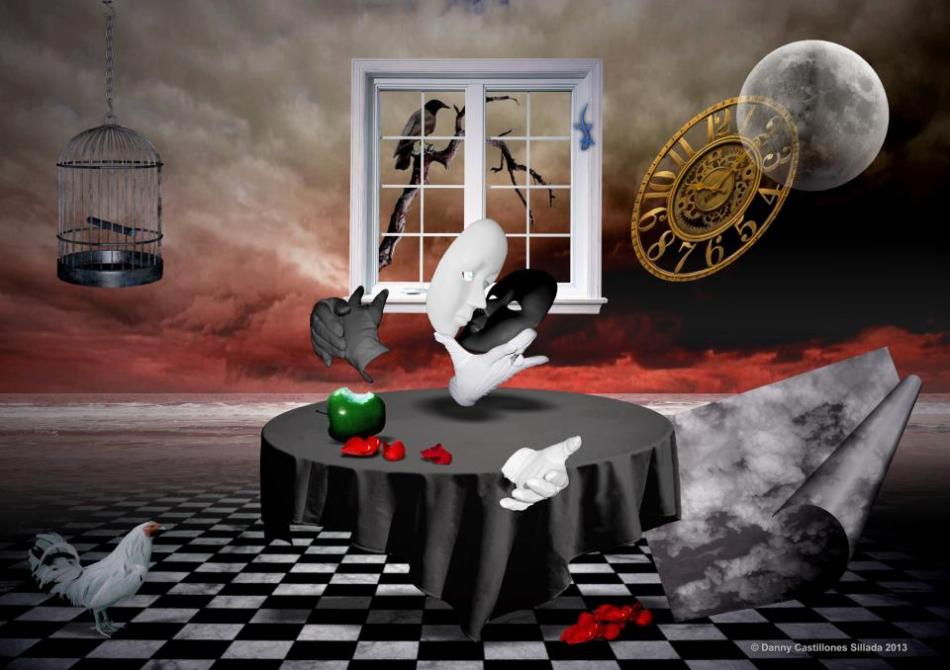 The existence of love resides within the heart and soul of the person. The true experience of love is nurtured by struggle and sacrifice; it develops, grows, and seeks for the highest good and the well-being of humanity. The true nature of love is giving unconditionally rather than receiving, and the lover immediately reaps the intrinsic benefit of loving, because love is a liberating experience rather than selfish, jealous, or resentful.

Love is what makes humanity made sense and this fallible existence sensible. Love dwells in the heart and soul of human being who is capable of loving and receiving love. Whether you are falling or rising, with or without love, the world will continue to evolve and revolve because love, as a dynamic and rational feeling, can only survive among humans so long as humans live and give love!

Authentic love always seeks to understand the beloved no matter how many times the beloved wronged the lover, that even if the beloved had not yet inflicted the pain, the lover had already prepared a room of forgiveness inside his or her heart. 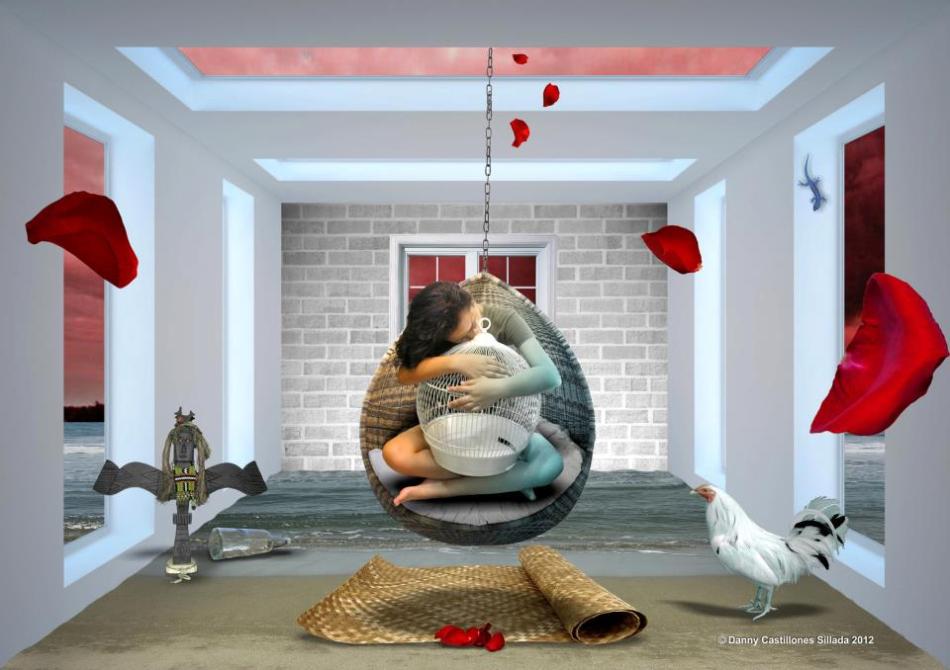 Dreaming a Sublime Home in My Ravaged Hometown, 2012, by Danny Castillones Sillada

My dearest Children, as my life slowly marches on its descending tramp, I have neither power nor wealth to bequeath you, but the knowledge and wisdom that I’ve learned through my existential struggle in this convoluted existence.

Life is humiliating—as you would have probably known by now—but there is something in humiliation, which is more profound and jolting, than avoiding the discomfort of our existence. It keeps our feet on the ground and makes us more human and sensitive to the pains and needs of others.

~ Danny Castillones Sillada, To Live Amid the Inconvenience of the World (An open letter to my children) (Manila Bulletin, November 4, 2012)

FREEDOM and FREE WILL are confined within the parameter of your existence! The only ‘free will’ you have is the will to live and the will to die by choice or by default. The more you assert your own empirical freedom the more you take away other’s freedom; the lesser you claim it the freer you become. Freedom, by its very nature, is rational and universal, not stupid or selfish!

~ Danny Castillones Sillada, To Live Amid the Inconvenience of the World (An open letter to my children) (Manila Bulletin, November 4, 2012)

“The thought of suicide,” says a German philosopher Friedrich Nietzsche, “is a great source of comfort: with it a calm passage is to be made across many a bad night.” But what comfort does the ‘thought’ of suicide bring? Is it the brief repose from the perturbing anguish and hopelessness or the anticipation of an end to a tormented life when the ‘thought’ of suicide is already consummated?

Most often, we are left clueless that our loved one or a dear friend is about to take his or her own life. It is only when the tragedy happens that we begin to wonder and ask ourselves “I could have known it!” or “Where did I fail?”

But why suicide? Why it is easier to contemplate on killing oneself rather than finding a slightest reason to live? Why death has become a definitive route for those who are experiencing the ‘unbearable’ rather than embracing life with a thousand choices or reasons to live?

That sublime act of losing is the poetic act of giving in which the giver finds new meaning in another being, who shares the same value on the object of the munificent act. The very essence of poetic gesture is losing in “sacrifice” so that others may find it, seeking its own channel in love and charity, benefiting both the receiver and the giver.

Once a benevolent deed is bestowed upon the recipient with no string attach or condition, the act of charity is completed. The completion of the act benefits not only the recipient, but also the giver because the very nature of charity is about sharing and commitment for the common good of the receiver.

It is only through the inescapable presence of death that a man can take his existence and the existence of others seriously with utmost respect, commitment, and responsibility. Every death as much as every life is an encounter with others, creating transcendent value and meaning for everyone to cross safely from this life to the other side of the world.

The immutable condition of death compels man to make his life and others sufferable and meaningful to live.  A just society nurtures the reason and meaning of individual existence toward the highest good of humanity, constantly seeking and aspiring what is worth living or dying for.

Below is one of Danny Castillones Sillada’s suites of surreal works in YouTube titled “Of Forms and Colors.”

2 comments on “[Arts Corner] Landscape of Thoughts and Images: Beyond the Mind of An Artist – Danny Castillones Sillada”