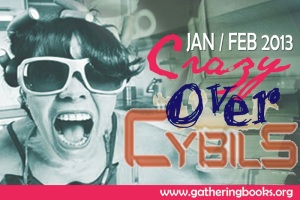 Still in celebration of our bimonthly theme, Crazy Over Cybils, I decided to do a 3-in-1 Gathering Books special today. I borrowed a bunch of books from the library, and I will try to feature as many of them as possible. Two of the books featured today were nominated in the 2012 Cybils for the middle grade fantasy and science fiction category; the other won the 2008 Cybils Graphic Novel award.

Earwig and the Witch

I didn’t know who Diana Wynne Jones was until I saw Howl’s Moving Castle tucked neatly in the middle grade fiction shelf of Barnes & Noble. Howl’s Moving Castle was my favorite Studio Ghibli film directed by the greatest Japanese animator of all time, Hayao Miyazaki. I have not read the book until now, but after reading Earwig and the Witch I wanted to grab a copy from the library. Maybe even buy myself one.

With a good amount of spacing between the lines and only a few hundred pages, Earwig and the Witch is an easy breezy read. I was able to finish the book in one sitting. The story tells of Earwig, an orphan living in St. Morwald’s Home for Children. What sets Earwig apart from other oprhans is the fact that she does not want to be adopted. She prefers to stay in St. Morwald forever because everyone did exactly what she wanted.

Earwig soon learns that the things we don’t like the most are often times the things that we are most likely to encounter. In her case: adoption. A very strange couple drops a visit to St. Morwald and chooses to take Earwig home out of the hundreds of children in the orphanage.

Earwig could see that they had tried to make themselves look ordinary, but she knew they were not, not in the least. The woman had one brown eye and one blue one, and a raggety, ribby look to her face. It was not a nice face. The woman had tried to make it nicer by doing her hair in blue-rinsed curls and putting on a lot of purple lipstick. This did not go with her brown tweed suit or her bright green sweater. And none of it went with her big red hat or her sky-blue high-heeled boots.

As for the man – the first time Earwig looked at him, he looked like anyone you might pass in the street. The second time she looked, she could hardly see him at all. He was like a long black streak in the air. After that, every time she looked at the man, he seemed taller, and taller still, and his face seemed grimmer and more frowning. And he seemed to have long ears. By the time the man and the woman were standing in front of Custard, Earwig was almost sure that the man was nine feet tall and that he did have two somethings sticking up from his head. The somethings could have been ears, but Earwig rather thought they were horns. – pp. 6-8

Is Earwig in the company of witches? Is she a witch herself? And will our young heroine make them follow her bidding as she had done to the people at St. Morwald’s? I leave for you readers to find out what happens to Earwig and her new, er, mum and dad. In reading the book, I was reminded of a quote by J.K. Rowling: “We do not need magic to transform our world. We carry all of the power we need inside ourselves already.”

Initially, I was going to post one review at a time for the Cybils contenders that I borrowed. However, two months is such a short time to feature all these wonderful books. Upon seeing The Brixen Witch among my “Cybils pile,” I decided to do this 3-in-1 review special.

Another story about witches, The Brixen Witch is Stacy DeKeyser’s clever retelling of the classic tale of the Brothers Grimm, The Pied Piper of Hamelin. (The story was also reimagined in Robert Browning’s poem.) The book cover featuring Rudi, the protagonist of the story, reminded me of Bilbo Baggins with his wooden staff in The Hobbit: An Incredible Journey. Too much of a geek, perhaps? Heh.

The plot is simple. A boy named Rudi accidentally takes a golden guilder with him while hunting in the mountains one day. When his grandmother Oma finds out, she immediately sends him back to the mountains, telling him that the golden guilder, owned by the Brixen witch, must be returned to the mountains. That or all hell breaks loose. Rudi sets out to the mountains before snow wraps all of Brixen. Thinking that he had done his task, he returns to Brixen and all is well. Then the rats appear. The mayor and the townspeople gather to figure out how to get rid of the rats. The rest of the story follows the classic Brothers Grimm’s tale. Will The Brixen Witch end as tragically as the story that preceded it? You best make sure to find out! As Oma said in the book, “It is bad luck to talk about such things.”

“So I found the entrance to her lair,” thought Rudi to himself as darkness fell and the lights of the village appeared below through the slanting pellets of ice. “I wonder if anyone else knows where it is. I wonder if I’d ever be able to find it again.”

But he couldn’t imagine ever wanting to find it again. Every blink of his eyes brought a flash of memory: the gaping mouth; the teeth like spikes; the foul icy breath. And the screech – it had been painful to his ears, like a thousand cats fighting in a room with walls of stone. – p. 2

In spite of being a middle grade fantasy story, The Brixen Witch gave me the creeps. Because I work graveyard shift and sleep most of the day, it didn’t help that I only got to read the book in the late afternoons and evenings – home alone. It also didn’t help that I have an overactive imagination. I love how I tried to picture the scenarios in my head and end up flipping the pages like crazy, hoping that I wouldn’t have nightmares. (I didn’t, thankfully.)

The Brixen Witch is certainly one book I’ve read this year that surprised me. I wasn’t particularly fond of the cover. (Yes, even though it reminded me of The Hobbit.) But I didn’t expect the story to be fast-paced, packed with cryptic and nightmarish images, and engaging at the same time. Whether Stacy DeKeyser’s goal in writing the book was to scare readers or reimagine a classic story, I must say that The Brixen Witch delivered.

Fractured fairy tales are a favorite here at Gathering Books. It was such a delight to find out that Shannon and Dean Hale’s Rapunzel’s Revenge won the 2008 Cybils Graphic Novel award for the middle grade division. I don’t usually read graphic novels of this kind. I stick to the standard fantasy graphic novels in the likes of Neil Gaiman, the Batman series, and other superhero collection, among others. In this regard, I love how our bimonthly themes allow us to explore books outside our comfort zones.

Once upon a time, there was a beautiful little girl. That’s me there. I lived in a grand villa…. with loyal servants… tasty food… and my mother. Or who I thought was my mother. – pp. 4-6

In 2010, Disney released Tangled, their adaptation of the Brothers Grimm’s original tale. I have not seen the movie but saw that it had good reviews. While browsing for images of said animation, I could not help but see, in picture alone, how similar it was to Shannon and Dean Hale’s graphic novel.

However, there’s more to Rapunzel’s Revenge than meets the eye. Props to Nathan Hale for the vivid pen and ink color illustrations that fill every page, and the well-defined facial expressions of the characters. The storytelling was superb, taking the classic Rapunzel story to a different level by expanding it into a series of adventures. While it follows a main plot, the story branches out into separate exploits.

One of the things that I really liked about Rapunzel’s Revenge is how Rapunzel was no longer portrayed as a passive character. Here, Rapunzel takes charge, even in the presence of a man. (This man also happens to come from another classic story! The merging of these tales was such fun indeed. As for what the other classic tale is I leave for you to discover.) She is smart and feisty, determined to put an end to Mother Gothel’s wicked ways even if it meant becoming an outlaw herself. 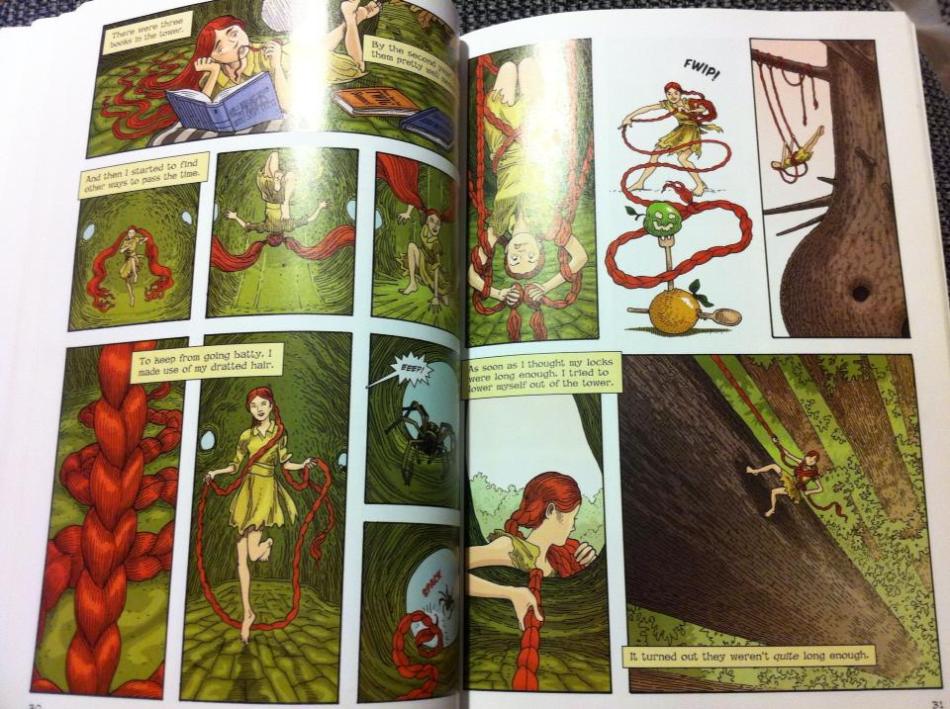 I didn’t have a chance to look into the other graphic novel finalists for that year but I think that the judges made a good decision in choosing Rapunzel’s Revenge as the winner. It has the right amount of art, wit, and humor, making Rapunzel a character to remember.

2 comments on “Of Witches, Fractured Tales, and Braid-Toting Outlaws: A 3-in-1 Gathering Books Special”