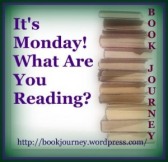 It’s Monday, What are You Reading is a meme hosted by Jen and Kellee from Teach Mentor Texts (and brainchild of Sheila at BookJourney). Two of our blogging friends, Linda from Teacher Dance and Tara from A Teaching Life have inspired us to join this vibrant meme.

Click on the image below to be taken to our book reviews from the previous week. 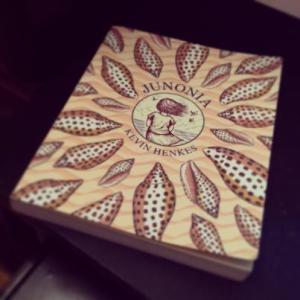 Poetry Friday: Water and Self Knowledge 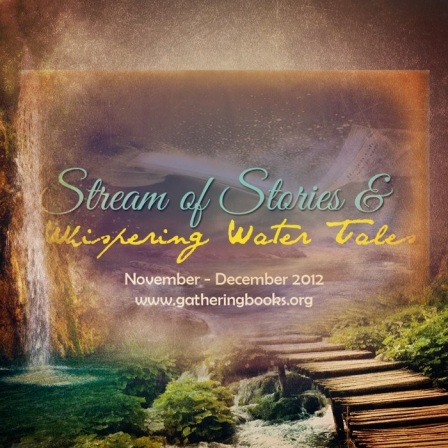 We are celebrating Water Tales here in GatheringBooks until the end of the year. I am excited to see that I can actually group a few of the picture books that I borrowed from the library according to certain recurrent themes and narrative trends. These four picture books highlight the role of water in our life’s journeys and finding home as well in the sea. 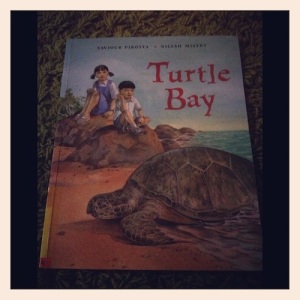 This is a perfect book to feature for our Project Splash! Asia in AFCC next year. The story is set in a lovely beach in Japan with a young boy named Taro and his old friend Jiro-San. While Taro enjoyed the old man’s company as Jiro-San taught him how to dive and feed crabs, the other kids in the area, particularly Taro’s sister, Yuko, regarded Jiro-San as strange and weird. The kids are unable to fathom why he would sweep the beach with a broom and clear out the litter and the trash that has been swept away by the waves.

The story could have turned out to be didactic and preachy, yet the narrative and the illustrations were such that it seemed very natural. Taro knew that the old man had a lot of secrets and Jiro-San explained that it was the coming of his ‘friends’ that he was preparing for. Who these friends are, I shall leave for you to discover *wink wink.* 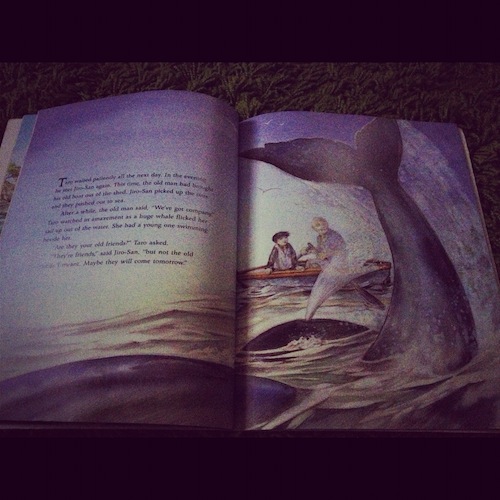 What I loved best about the story though is how friendships are portrayed to transcend age and gender, and how it can exist among creatures who look out for each other. Teachers would also be glad to note that there is an Author Note found at the back of the book explaining in greater detail how endangered most sea turtles are in this day and age. For those who may wish to use this book in the classroom, click here to be taken to a link that provides a fairly comprehensive unit study prepared by Jen Unsell.

Our Home is the Sea 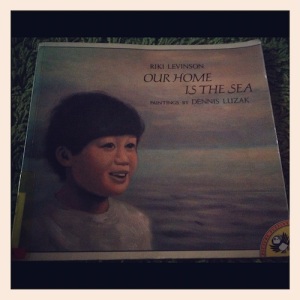 This lovely book is set in the crowded streets of Hong Kong and tells the story of a young boy who is very excited about the fact that it is his last day of school and that he can go back to his home in the sea. I like how his journey from his school to his house on the water reflect the bustling city life of Hong Kong and the many cultural facets that make it distinctive and unique – from the tram to tall buildings and old men doing taichi in the park.

More importantly, it also highlights how the sea can be a peaceful and quiet haven to children who live in such a highly urbanized society. I also love the subtle note in the last part of the book, the quiet understanding between the boy and his father, the fisherman.

After we eat, we climb down into our sampan and ride out, past the jetty, to grandfather’s big boat.

Father and I climb up the ladder.

Mother calls and tells him I will be a schoolteacher someday.

I look at my father. He looks at me. We do not say a word. 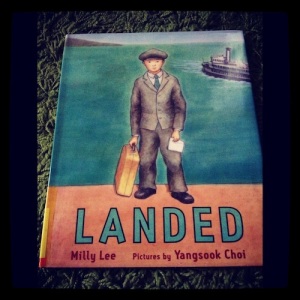 I meant to share this book and So Far from the Sea a few months back when we had our Festival of Asian Literature and the Immigrant Experience theme, but didn’t have the time to review it. This story reminded me a little bit of Shaun Tan’s The Arrival and Karen Hesse’s Letters from Rifka.

The book shares Sun’s journey from China to Gold Mountain in America to be with his older brothers who have traveled to the land of milk and honey way before him. With the 1882 Chinese Exclusionary Act, Sun’s father told him: “One wrong answer, and you might be sent back to China.” What makes this story even more compelling is that it is based on a true story from Milly Lee, the author’s father in law, and his experience when he first ‘landed’ in America.

Unlike other picture books with a carefully-regimented number of words, Landed is pretty text-heavy, matched by full-page colorful illustrations that are breathtaking in its exquisite detail. It shares how Sun prepared his responses for possible questions that the immigration officials would ask from him: details about his house, the number of windows, even the directions the doors face – this is all to prove that he is not just a ‘paper son’ whose documents have been fabricated to allow him entry to the country. 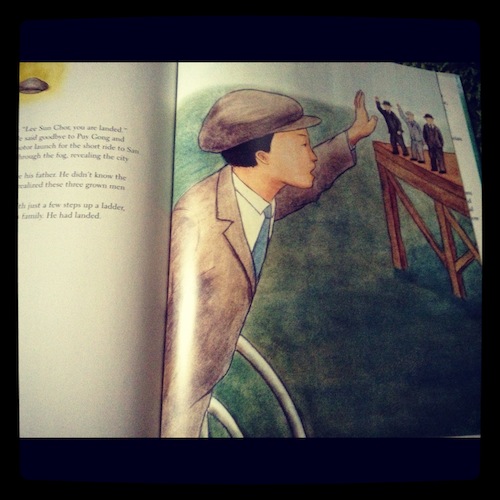 Reading accounts such as these remind me to never take for granted the relative ease with which people now are able to travel from one country to the next compared to a few decades back. It also pays tribute to the fortitude, spirit, and strength of character of immigrants who made the United States their home. For those who wish to know more about the author and her creative process, here is a lovely interview done by Marjorie Coughlan from Paper Tigers with Milly Lee. I also found a website that features a very comprehensive list of activities on the Chinese Exclusion in the US, its historical background, and even more links to other resources.

So Far From the Sea 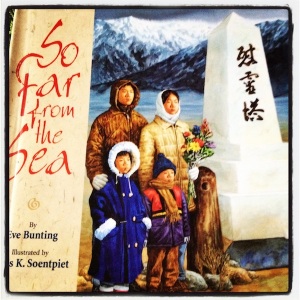 Again, I saved the best for last. I am a huge fan of both Eve Bunting and Chris Soentpiet – it is not unexpected that their collaboration is just … fabulous. This is a haunting and powerful book about recollecting a dark time in American History – when over ten thousand Japanese Americans were interned at the Manzanar War Relocation Camp during World War II.

A young girl Laura Iwasaki and her family had to pay their respects and visit her grandfather’s grave at the Camp before they move to Massachusetts. The black-and-white/sepia toned glorious illustrations of Soentpiet reflect the vivid recollections of a harsh time filled with deprivation, uncertainty, and the ugly face of war. 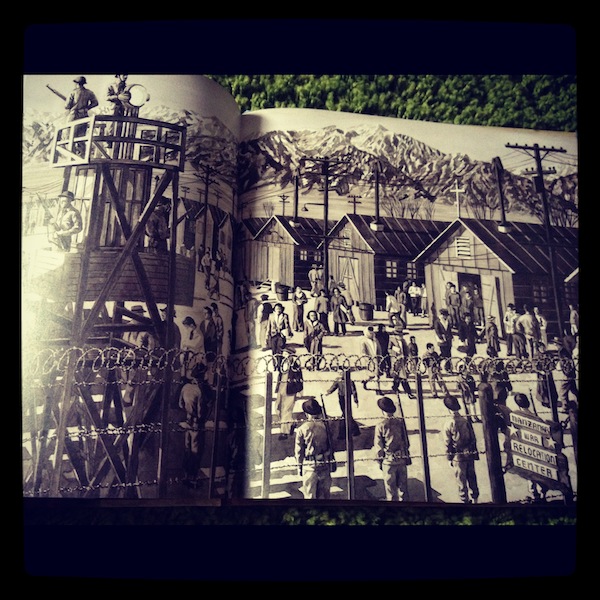 The colored pages, on the other hand, reflect the current period as Laura, her parents, and younger brother move through this seeming-ghost-town, feeling through pieces from the past with silk flowers in their hands, wire fences, and the distant melody of a forgotten song. The sea also plays a key role as Eve Bunting has subtly interwoven the waters into her narrative, suggestive of freedom and its expansive nature.

There’s a sea in Boston, too, and Dad says we can see it from our new house. I think how much Grandfather would have liked that. To him, the sea was everything. 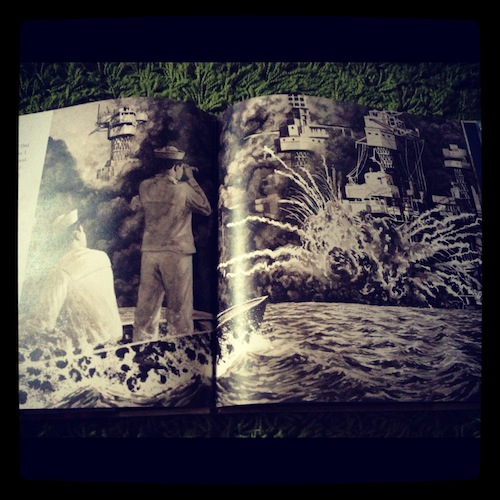 I especially liked how father and daughter attempt to come to grips and find meaning from this experience as they transcend the pain, anguish, and bitterness over being exiled from their own home:

“It wasn’t fair,” I say. “It was the meanest thing in the whole world. You were Americans. Like I am. Like Thomas.”

Dad shrugs. “It wasn’t fair that Japan attacked this country either. That was mean, too. There was a lot of anger then. A lot of fear. But it was more than thirty years ago, Laurie. We have to put it behind us and move on.”

He looks toward the mountains. “I used to watch those. They’d change with every season. In summer, at sunset, they were pink and a shadow like a giant eagle would fall across them. I’d wish I could climb on its back and fly away… far, far, away.”

This is a book that every library should carry. For teachers who wish to use this in their classrooms, here is a detailed lesson plan as found in Chris Soentpiet’s website. Texas Librarian also has a detailed list of discussion questions and possible activities that can be done in the classroom. 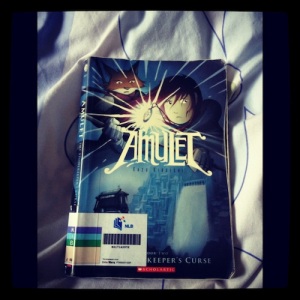 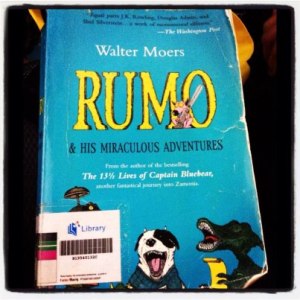 I have finished reading Book 2 of the Amulet Series: The Stonekeeper’s Curse by Kazu Kibuishi and I have to admit that I am hooked. I must have read this graphic novel in under two hours’ time. It is truly riveting as it has all the successful ingredients for an accidental hero’s journey: the quest for the fruit that would save the protagonist mother’s life, ancient talking trees (reminiscent of Tolkien’s ents), mastering one’s powers or skills, betrayal that would blindside the reader (ok, I was half-expecting that to happen), and strange creatures matched by glorious illustrations. I have no doubt kids would enjoy this. I have a feeling there would be a film adaptation in the works very soon. I am also making my way through Walter Moers’ Rumo and his Miraculous Adventures. Relatively slow progress, but I’d get there soon.

How about you, dear friends, what have you been reading this week?

Our Home is the Sea is an NCSS-CBC Notable Children’s TRade Book in the Field of Social Studies.

10 comments on “Monday Reading: Water Journeys and Finding Home in the Sea”