A few months back, one of the major bookstore chains in the country had a book sale and like any predictable bibliophile, I found myself hoarding. One of the books I picked up was Margarita Engle’s Tropical Secrets. I wasn’t sure what it was about, I picked up because of the author who Myra has gushed about quite a few times and who we had a pleasure of featuring this year on our site. When I finally found a reason to pick it up recently—we were not making any progress in our Novel in Verse challenge—I discovered it was about Holocaust Refugees, I cringed. 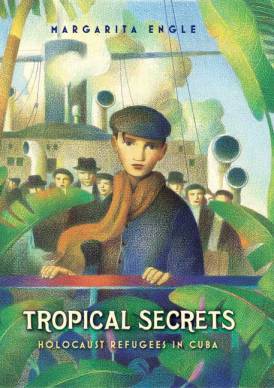 I try as much as possible to stay away from literature related to Nazi Germany and the Holocaust because I’m often left with nightmares and a depression I can’t shake off. While I enjoyed for instance reading Zusak’s The Book Thief, it was constantly heart wrenching and I needed to follow it with a number of light reading to get myself out of the gloom pool. I knew that reading Tropical Secrets was going to be tough on me, add the fact this was my first Novel in Verse I wasn’t sure what the experience would be like. If I were to describe my experience in one word it would be crescendo which is defined as a gradual increase in volume. Tropical Secrets began slowly and built its way up in the emotional scale of things.

The two children in this novel, Daniel the German Jew and Paloma the Cuban girl are both helpless in the situation they find themselves in. The reader watches them doing what they can with whatever is given. Daniel, a German boy separated from his parents is in a strange land. He knows no one, he understands no one and we watch him hold on to his winter coat in the Cuban heat. In his powerlessness, he holds to his dreams of meeting his parents in New York in the near future. Similarly, Paloma is powerless in the greater scheme of things, watching her father extort money from the refugees for their safety. Holding this little secret to heart, she compensates in the way she can by helping refugees, caring for them and giving them food to eat.

Throughout the story I watch these two children struggle with an issue greater than me. They grasp at straws at making sense of their lives amidst the Holocaust. But Engle doesn’t allow her characters and reader to simply struggle and sulk at the fact that they are powerless. She introduces to us a kind of power that is brought out of compassion, of helping someone else. And we watch the children hang on to this idea, a seemingly impossible idea of helping two people and we watch them triumph. In many ways, as I’ve said, Tropical Secrets is written to a crescendo and in many ways we watch both children gain some kind of power—the kind that lasts as it is built from within.

Decimar—the art of inventing life as it goes along.

This word caught my eye and so did Daniel’s. I feel this is the apt word to describe how refugees try to survive in Cuba. David, the Russian refugee who now sells ice cream invents life as he goes along. We watch Daniel do the same, as he slowly takes out his coat, wear clothes made of cotton and eat Cuban cuisine. We see this as he gravitates towards the unknown music of the Cubans and learn to play their tropical sound. I can only imagine that in order to live a new life in a strange land, one must embrace Decimar and invent life as it goes along, after all the life one knew could no longer be returned.

The premise behind universal responsibility is the simple fact that we all want the same thing. Every being wants happiness and does not want suffering. If we do not respect this fact, there will be more and more suffering on this planet. – Dalai Lama, How to See Yourself as You Really Are.

I’m currently reading the above mentioned book and this quote was something that kept coming back when I was writing this review. Because they were Jews, many innocent human beings were uprooted, tortured and killed. We find Daniel, a young Jew uprooted to Cuba without a home or family to hold on to. Yet, at the same time, this persecuted boy finds in his heart an understanding towards the meaning of innocence. He witnesses that it is not just the Jews that can be uprooted, tortured and killed. He realizes that nothing is more dangerous than our spiritual beliefs. He realizes this as he helps a Christian man and a Jewish woman escape the recent investigation on German spies, wherein the hunt for such spies is solely based on being a Christian German.

What Nazi Germany could not do for him, Daniel could do to this one German Christian man married to a Jewish German woman. He finds compassion in his heart and looks beyond each other’s belief.

Hollow bone are the magic

That helps a bird fly.

Hope is the mystery

That keeps me alive.

Kindness is the surprise

That makes me hopeful.

Love is the kindness

That keeps Miriam and Mark

We will help them.

I ask then, how can a boy who has been in a situation like his, find it in his heart to treat another with compassion.  I can only surmise that when there is true understanding of love, compassion comes easy no matter how seemingly easy it is to wash our hands and preserve ourselves.

I am glad the story ended with a hopeful note. I don’t like reading about the Holocaust because it tells me how man can forget basic human truths for the sake of ideology. Tropical Secret is a novel that allows its reader to expand their minds about this part of human history. While it tackles the Holocaust, its effect, it also evens out the playing field and makes us realize how in these tragic stories of human history are stories of love and compassion and a promise of life despite suffering.

There is more that could be written about this book, but I find, overwhelmed as it is by the story, I only touched on the things that I felt was screaming to be written.

For other books written by Margarita Engle, you can check Myra’s review of the author’s Surrender Tree and Firefly Letters and Fats’ review of The Poet Slave of Cuba.

1 comment on “Inventing Life as it Goes: A review of Margarita Engle’s Tropical Secrets”