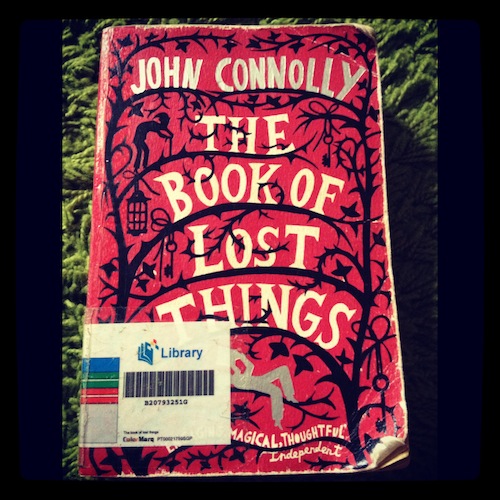 It’s Monday, What are You Reading is a meme hosted by Jen and Kellee from Teach Mentor Texts (and brainchild of Sheila at BookJourney). Two of our bookblogging friends Linda from Teacher Dance and Tara from A Teaching Life have been joining this meme for quite awhile now, so we thought of joining them here. The books that I have read are still in connection with our Books about Books and the River of Words. Rather than a spread of picture books, though, I also have an adult novel that I will be sharing here. 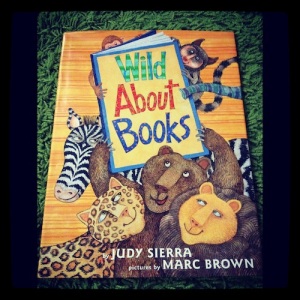 Story By: Judy Sierra
Illustrated by: Marc Brown
Publisher: Alfred A. Knopf, New York
Bought my own copy of the book.

This was a fun fun book to read, and I’m glad I found it in my book hunting expedition in Las Vegas several months back. It would have been a great book to feature as well for our Dusty Bookshelves and Library Loot theme – as it revolves around Molly McGrew, a Springfield Librarian who accidentally drove her yellow bookmobile into the zoo. Rather than find her way out, our lively librarian decided to simply open her computer and read her books with all the animals peering at her and wondering about those wondrous words coming out of each page.

By reading aloud from the good Dr. Seuss,

She quickly attracted a mink and a moose,

Eight elephant calves, and a family of skinks.

Soon enough, all the animals in the zoo were stampeding to know more about “this new something called reading.” It was great seeing various animals holding on to books and more books – and I’m pretty sure that a lot of young kids would laugh in glee as they see hyenas poring over illustrated pages – and other animals reading to their hearts’ content. The narrative also speaks about the importance of handling reading materials well and how to treat them gently. Soon enough the animals were also inspired to create their own stories – there’s even a Zoolitzer Prize! I was also particularly amused at the scorpion who gives a stinging review of the haiku scribbled by cute bugs. While I would not say that this was my favorite picture book on ‘books about books’ – it’s still a pretty neat and amusing read. 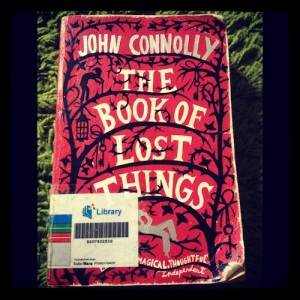 The Book of Lost Things

Story By: John Connolly
Publisher: Hodder and Stoughton, 2006
Borrowed from the public library.

This book, at its very core, is about grief – and coming to terms with it. I mentioned several weeks back that there is a darkness in this book that can be tasted and touched, if you look hard enough. There is pain too – an overwhelming sea of anguish one can literally drown in.

I was initially surprised to find this book in the adult section in our library – after reading it, I figured out why. While it may be construed as a coming of age tale for 12 year old David (who is mourning the death of his mother and dealing with his father’s remarriage and his stepmother’s pregnancy) – adults might be able to resonate with the nuances and the depths of loss and depravity depicted in this book. It’s more like a smorgasbord of ‘faintly macabre’ fairy tales (in reference to my love affair with The Phantom Tollbooth which I reviewed here) with tortured-tangled-twists.

Similar to other young people who suffered enormous loss – add to that the outside world being turned over on its head (war is thick in Europe with flying German planes overhead in overcast London) – David turned to that which makes sense and gives the most comfort: stories, fairy tales, books:

Stories were different, though: they came alive in the telling. Without a human voice to read them aloud, or a pair of wide eyes following them by torch light beneath a blanket, they had no real existence in our world. They were like seeds in the beak of a bird, waiting to fall to earth, or the notes of a song laid out on a sheet, yearning for an instrument to bring their music into being. They lay dormant, hoping for the chance to emerge. Once someone started to read them, they could begin to change. They could take root in the imagination and transform the reader. Stories wanted to be read, David’s mother would whisper. They needed it. It was the reason they forced themselves from their world into ours. They wanted us to give them life. – p. 3

It reached a point, though, where the boundaries between the real and the imagined, the fantastical and the commonplace got all mangled up with a gluttonous Snow White, freedom fighter dwarves, Wolflike creatures who have taken the worst elements from both human and beast alike into its character, a single-minded huntress filled with vanity and indifferent viciousness, and a perverted and malicious Sleeping Beauty whose intention is to bring pain and death – among others. There is also one’s worst nightmares come to life in the presence of The Crooked Man – the Rumpelstiltskin figure – only more sinister and evil and dark (the depths of which I can’t even begin to share with you) – as it gathers together these ‘lost things’ – the mundane scraps of everyday life that bring light and salvation – and transform them into fragments of pain that would pierce one’s core – damning one to a lifetime of darkness that is worse than death.

This book is not for everyone. I thought that it was like a purging of sorts for the writer – maybe the shadows in John Connolly’s spirit that compel him to embody these demons into nothing less than the sweet fairy stories of yore – infusing them with every imaginable atrocity known to reside in the darkest corners of a man’s heart. Much as I’d like to say there was redemption – I felt that the triumph is tinged with resignation – a blunted-kind-of-nagging pain that will be there for eternity, but the kind that one can live with – if only, to survive, and keep breathing.

I finished reading Walter Moers’ The City of Dreaming Books a week ago, and I must say that this is the definitive book about books. I hope I can do it justice with my review which will be posted a few days from now. 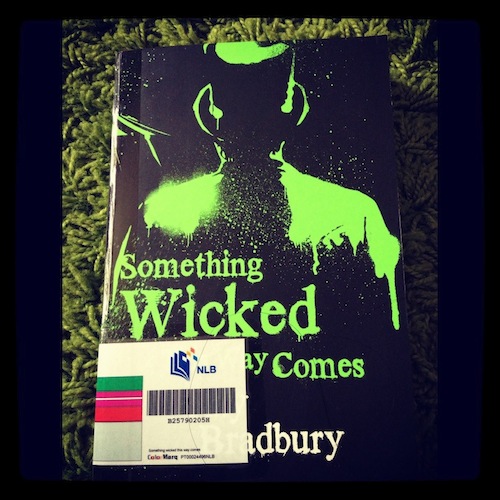 I have finished reading this book over the weekend, and the language is just so delicious, it begs to be read aloud: Something Wicked This Way Comes. I hope to review it as well before our theme ends, we shall see how that goes.

I have just begun reading Walter Moers’ The 13 1/2 Lives of Captain Bluebear. I can’t wait to be back in Zamonia. I have a feeling I won’t be able to read The Year of the Book by Andrea Cheng (realistically speaking), but I’m glad that it’s still here in my shelves.

What about you, dear friends, what have you been reading this week?