I feel that it’s not appropriate for me to claim that this is a review of a classic. After all, even before my birth it has found its way in the hearts of generations and my review of it will not make it or break it. Furthermore, I am not confident enough with my ability to say I can tackle a classic with an educated and critical opinion. So, let me take this “review” into another direction and towards the world of insight (and introspection).

Jane Austen made her way through my heart with my high school reading of Emma and Pride & Prejudice. I spent a good quarter of the school year writing a paper on Jane Austen and feminism using Emma, the match maker, as my anchor. Do not ask me what came of it, for I can no longer recall. But it was in high school that I began this journey. But my teenage mind was barely formed and my impression of a classic was limited by the guide questions our book reports demanded from us. When college life afforded me a bigger allowance and money to spare for books, the relatively-cheap Penguin Classics attracted the cheapskate in me and with much determination  and with what I believed to be a more mature mind, I read Jane Austen. When I say I read her, I do mean buying and reading every single novel of hers. I will not pretend to have no issues with the language. English is my second language and I gained proficiency in the language rather late compared to most kids. English in and of itself can be troublesome for someone like me, so much so Austen’s English. But I was determined, and like Austen’s heroines, once determined I was sure to succeed. 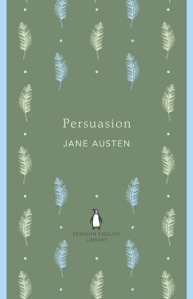 My recent reading of Persuasion is my second or third reading of the novel and much aided by the recent television adaptation of the novel, so I had the pleasure of seeing more movement and actual faces as I read about Anne Elliot and Mr. Friedrick Wentworth. The novel’s story begins with a simple premise to our lovers’ story. Eight years ago, Anne and Friedrick were engaged, but Anne was persuaded otherwise by Lady Russel, leaving two broken and regretful hearts. However, for Anne, her mature mind and firm conviction came too late when she had already given her happiness away.

How many of us have been like Anne, listening too much to the advise of people and soon regretting having no conviction or firmness of mind? And how many times have we been like Lady Russel dispensing biased advises? We have constantly been in similar situations and its consequences are not strangers to us. I, for one, have gone through much life-altering decisions that I regret, but I could only now resign myself to.

Persuasion picks up where most love stories end, it begs to ask what happens when the world is against lovers and wherein one of the lovers succumbs to what is dutiful. Truthfully, I find this is where the meat and the excitement of the story is, for after all, this is more real life. Not everyone is Romeo and Juliet. In between the pages of this book, we find resentment, denial, heartache and moving on. The tension amongst the lovers as they meet again and interact is thick between the pages and the reader wonders: Is Captain Wentworth truly over and indifferent towards Anne Elliot? Will Anne forever try to shy away from interactions with her former beau?

Persuasion isn’t Austen’s most popular book, but it is her last completed novel.  And according to Elizabeth Bowen’s Discussion Notes on the latest Penguin Library publication of Austen’s Novel, Persuasion is where the author let go of her self-imposed restraint in writing. She digs further into the emotions of a woman (not of a young girl, which we see in most of her novels) whose love has grown. Yes, Persuasion is about dealing with a love that has grown up and in many ways grown strained.

The enjoyment I derived from this particular Austen novel is in the juxtaposition of the silly vanity of her family members and Anne’s very sensible and open mind. Austen never fails to make her laugh with amusement, while she sometimes portrays this silliness to the level of caricature. These characters have brought on the generic description to her novels of being social commentaries. If anything, one of Austen’s favorite things to highlight in any of her novel is prejudice and the harm it brings to people. Persuasion is no exception.

While I have yet to be in a situation such as that of our protagonist, I have in many ways known the life of someone who has been thrown into a family that lives a life quite differently from myself, whose influence forces one to bend to duty. The beauty of Persuasion is the fact that we watch Anne Elliot (and even Captain Wentworth grow). At the young age of barely 20, Anne found her decision mostly guided by her mother’s close friend, Lady Russel. Her conviction, like any of such young age is malleable. But in her late 20s with her “youthful bloom” supposedly gone, she has grown mature, stronger in her conviction and persistent with what she knows is best for her. This keeps me cheering as a reader. The “dance” between the protagonists keeps the reader waiting for that perfect end—that moment where they finally do come face to face, pretenses down. Which we do get, in that wonderful scene in the Bath parlour:

“Footsteps were heard returning; the door opened; it was himself. He begged their pardon, but he had forgotten his gloves, and instantly crossing the room to the writing table, and standing with his back towards Mrs. Musgrove, he drew out a letter from under the scattered paper, placed it before Anne with eyes of glowing entreaty fixed on her for a moment, and hastily collecting his gloves, was again out of the room, almost before Mrs. Musgrove was aware of his being in it—the work of an instant!

The revolution which one instant had made in Anne, was almost beyond expression. The letter, with a direction hardly legible, to ‘Miss A.E–.’ Was evidently the one which he had been folding so hastily.”

Austen is comfort reading to me.  She never fails to make me laugh and feel happy after reading. While I would love for other people to enjoy her work, Austen, though popular among the classic reading list, isn’t for everyone. But if you have seen the film and enjoyed it, I do entice you to read her. If you have read her, I am curious which is your favorite novel? How did you like Persuasion?

3 comments on “A trip to Austenland: A Saturday with Persuasion”