As we celebrate Women’s month along with the Kidlit Community (which coincides beautifully with our very own bimonthly theme on Girl Power and Women’s Wiles), it seems fitting to begin our Poetry Friday contribution with female poets who have touched our sensibilities in mighty profound ways. 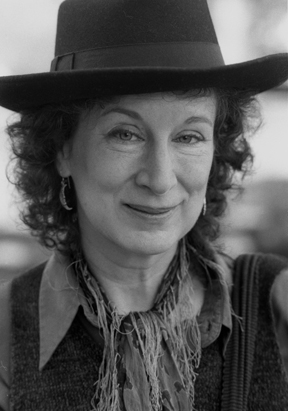 I first knew Margaret Atwood as a poet rather than a novelist. I was introduced to her Variations on the Word Love and Variations on the Word Sleep (which I also featured for Poetry Friday several moons back) by a very good friend. I was also deeply moved by her poems that spoke sharply and incisively about women’s realities. I figured that it would be great to begin with her as our Fridays (until the 9th of May) would be devoted entirely to celebrating female poets. Poetry Friday is hosted this week by Gregory K from Gotta Book.

A Women’s Issue by Margaret Atwood

The woman in the spiked device
that locks around the waist and between
the legs, with holes in it like a tea strainer
is Exhibit A.

The woman in black with a net window
to see through and a four-inch
wooden peg jammed up
between her legs so she can’t be raped
is Exhibit B.

Exhibit C is the young girl
dragged into the bush by the midwives
and made to sing while they scrape the flesh
from between her legs, then tie her thighs
till she scabs over and is called healed.
Now she can be married.
For each childbirth they’ll cut her
open, then sew her up.
Men like tight women.
The ones that die are carefully buried.

The next exhibit lies flat on her back
while eighty men a night
move through her, ten an hour.
She looks at the ceiling, listens
to the door open and close.
A bell keeps ringing.
Nobody knows how she got here.

You’ll notice that what they have in common
is between the legs. Is this
why wars are fought?
Enemy territory, no man’s
land, to be entered furtively,
fenced, owned but never surely,
scene of these desperate forays
at midnight, captures
and sticky murders, doctors’ rubber gloves
greasy with blood, flesh made inert, the surge
of your own uneasy power.

This is no museum.
Who invented the word love?