The Holidays ain’t over for us yet since we have a bit of spill-over with our Poetry-filled Yuletide Cheer theme continuing until end of next week. What can we do – we can not seem to get enough of poetry! 🙂 We can’t possibly end our theme without featuring Michael Rosen‘s nonsense book of poetry – highly recommended as well by award-winning Alwin Aguirre, our Featured Academic.

As the title goes, the entire book is a luscious collection of nonsense verse – there are 31 poems in all excluding the Introduction and the Postscript – which are strangelicious in their own right:

This is not the end of the book. It’s the beginning. And while I think f it, this is not a potato, it’s a book. Because it’s a book it’s not full of sandwiches, it’s full of words and pictures. This is the end of my introduction.

That should give you an idea of the hilarity wrapped around this book that celebrates nonsense in its form, rhythm, rhyme, voice, meter, line, whathaveyou. We find a jellyfish under the rug in Splish – as we wonder how a birthday cake stuck in the washing machine tastes like in Rosie, Rosie [as the cat shared ‘well at least/ the cake was clean’]. Do you know what a sticket looks like? Or a flat-on-the-flaurus for that matter? 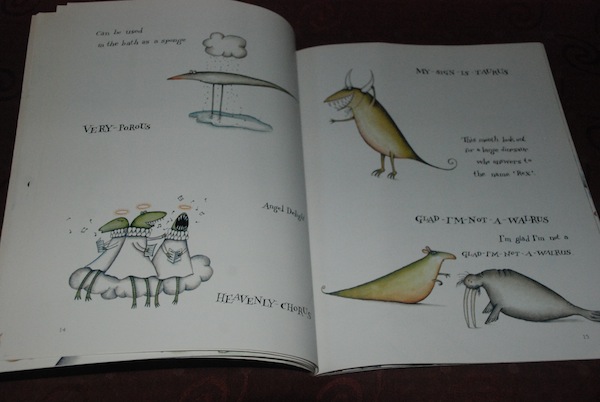 The reader also empathizes with a common garden toad stuck in the middle of the Road. I was reminded of Cloudy with a Chance of Meatballs in Rosen’s Beans and found myself giggling with his 6 Limericks – a tamer version of Edward Gorey’s definitely-not-for-kid-limericks.

I also thought that similar to the partnership that Roald Dahl and Quentin Blake enjoyed, this collaboration between Rosen and Mackie is just as inspired and powerful! Mackie has brought to life creatures such as Bips

they show their greasy

they go about in gangs.

and the lovely Mary Anne, made of elastic who “stretched and stretched/ right round the world.”

My absolute favorite though from this first book is Help.

Help, help
nothing’s right
I can’t find my ears
and my pants are too tight.
There’s a clock in my sock
there’s a rose up my nose
there’s an egg on my leg
and there’s a stink in the sink.
Help, help
I’ve had enough
I can’t find my eyes
and the going’s getting tough.
– (p. 10)

Even More Nonsense from Michael Rosen Illustrated by Clare Mackie

In the sequel to Rosen’s bestselling nonsense book, we have 20 more poems excluding once again the lovely Introduction and his epilogue aptly entitled as “An End to All this Nonsense.”

In this collection, the reader sees more allusions to I.T. savvy-techie-stuff as seen in the P.C. Cats and Plonky Wonky Doodah who does nothing but chat online. There is also the world’s first Stray Cat in Space in The Cat Went Out as well as Little Queenie who happens to be a real meanie. 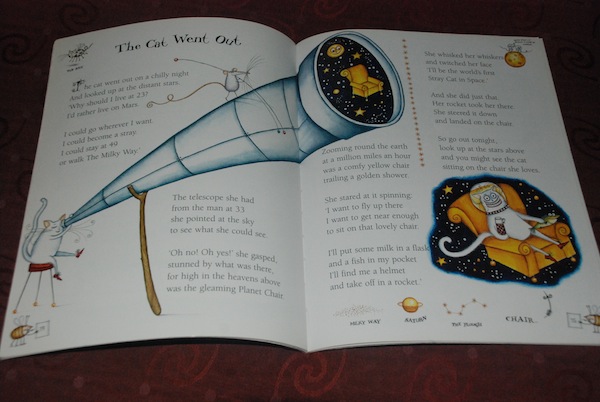 Similar to the first book, there are eerie creatures such as The Smeenge who happens to be ‘kind of, sort of wild.’ There is also Inky Stinky with the Skull Face who thinks that his Dad is bad. The reader also gets introduced to retired Windscreen Wipers and a boo-hoo-let’s-cry get-together in Our Party. My personal favorite, though, in this book is My Drink. Here are some excerpts from the poem: 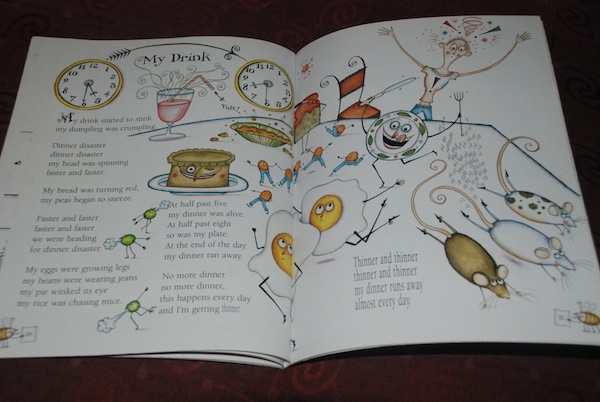 Now with a dinner like that, no need to diet!

Some Notes about Nonsense

People tend to take themselves way too seriously – educators more than most. This is a reminder for us to chill out, stop making sense of things all the time, and to simply let one’s mind wander at will. This book makes one enjoy the cadence of crisply structured nonsensical rhymes – lightened and sharpened by alliteration. Perfect for a read-aloud.

If you wish to know more about the amazing Michael Rosen (who was kind enough to leave a comment in this post), please click here to be taken to his website and here to be taken to his blog. I also have to credit Clare Mackie for the fantabulous illustrations which breathed life to Rosen’s irreverent wit and marked oddities. You may wish to check out her website here.

Michael Rosen’s Book of Nonsense, Illustrated by Clare Mackie. Hodder Children’s Books: A Division of Hachette Children’s Books, 2008. Book borrowed from the NIE library. Book photos were taken by me.

Even More Nonsense from Michael Rosen illustrated by Clare Mackie. Hodder Children’s Books: A Division of Hachette Children’s Books, 2008. Book borrowed from the NIE library. Book photos were taken by me.

11 comments on “A Celebration of Nonsense Poetry: A Michael Rosen and Clare Mackie 2-in-1 Special”