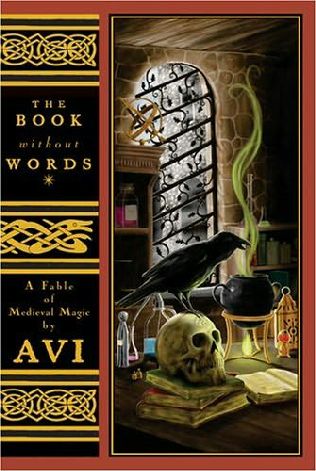 While technically this book has words and does not necessarily fit into our Wordless Picture Book bimonthly theme last March/April, I just could not resist including this book which called out to me from the library shelves. I decided to include this in our Whodunit Database instead because it has multiple deaths, shrouds of secrecy, and yes the classic “who is good/who is evil” conundrum among the characters.

“It was in the year 1046, on a cold winter’s night, when a fog, thick as wool and dank as a dead man’s hand, crept up from the River Scrogg into the ancient town of Fulworth. The fog settled like an icy shroud over the town, filling the mud-clogged streets and crooked lanes from Westgate to Bishopsgate, from Three Rats Quay upon the decaying river banks to Saint Osyth’s Cathedral by the city center. It clung to the crumbling city walls. It heightened the stench of rotten hay and offal, of vinegary wine and rancid ale. It muffled the sound of pealing church bells calling the weary faithful to apprehensive prayers.”

And so began The Book Without Words. This description alone is sufficient to establish the setting and the general whodunit feel of the book.  I have googled some of the places as indicated by Avi in his introduction but I was only able to find a picture of Saint Osyth’s Cathedral.

The website indicated that the Church has stood on the site for at least 900 years. It was said to have been built in 1118 by Bishop Belmeis – not 1046 as depicted by Avi in the book. Of course Avi may have used creative license in his writing or may have envisioned a totally different church as compared to this one which is still presently standing somewhere in the UK.

Wordless Magic Book, Stones of Life, and a Green Eyed Boy Burning with Earthly Desire. This lovely book has all the ingredients (perfect alchemical mixture) to a fast-paced YA read with a handful of aphorisms and ponderables to consider in a quiet evening, alone. Issues concerning life and death, immortality, reality of magic, truths concealed in fables would most likely arise.

Imagine an ancient book filled with blank parchment which contains elusive truths that are revealed only to a green-eyed being who is desperate enough to read the shimmering secrets found in the fragile, near-crumbling pages. Add to that the stones of life (the infamous philosopher’s stone which has been the subject of so many bestselling books, Harry Potter being one of them), a talking raven, a simple-minded thirteen year old servant, a mad alchemist, a troubled monk, a power hungry Reeve, a greedy apothecary, and a young boy in need of love – and you have a timeless classic in your hands.

The wordless magic book contains all the secrets to immortality and the Holy Grail to creating gold out of nothing. The pages, however, remain blank until a certain green-eyed boy (or girl) would be able to decipher its secrets with a heart filled with desperate longing. However, the revelations come with a prize: “It gives what is desired, but the desire consumes the taker” (p. 140) – the phrase actually reminds me of the oft-quoted: Be careful what you wish for, you just might get it; A bargain with the devil – Gain the World, Lose thine Soul. As explained by the monk who wishes to destroy the book:

“It contains all the evil magic of Northumbria. Whereas it can only be used in these Northumbrian precincts, its magic gives what is desired, even as the desire consumes the magician… Since such evil can never be entirely destroyed, it must be kept from those who might misuse it.” (p. 95)

The science and art of alchemy and wizardry. In this book, Avi speaks of four stones which need to be consumed in a specific order: (1) Life, (2) Thoughts, (3) Magic and (4) Time. From that alone, one can make inferences and educated guesses as to why it should be taken in this order. And as the narrative unfolds, the reader is able to sift out the meaning and its seemingly irreversible nature.

I also enjoyed how Avi describes the art of making potions:

Weak heart fluttering with excitement, Thorston used his right hand to pour a flagon of water over the clay. The water was holy water siphoned secretly from the cathedral’s baptismal font, then tinted pink with a drop of his own blood.

Taking the items from his hip purse, the old man rapidly added to the mix; bits of shredded gargoyle ears, chimera crumbs, scales from a fire-lizard’s tail, two dozen white spider legs, thirteen and a half nightshade leaves, sixteen hairs from the tip of a Manx cat’s tail, plus six white pearls of dried unicorn tears. He also dropped in the blackest of the raven’s black feathers.” (p. 3)

I just had to include that – my goodness, where does he find all these in his consciousness? Or maybe it is an altered state of consciousness/parallel planes of awareness that bring about this array of images in his head, I really don’t know. But it’s awe-inspiring.

Epigrams, Word play and Teacher Resources. This website shows how Avi’s book was used by a Mr. Moshe to generate a “setting discussion” with his students (click here to be taken to his site and the questions he raised to his class). I also was not surprised to discover that this book has garnered quite a number of awards (source here):

This downloadable pdf link created by Ellen Everett Myrick from btsb.com/libcorner is also an amazing resource that details possible discussion questions, various activities involving proverbs and fables, a glossary of terms, and a detailed interview with the author himself!

I believe that the strength of this book lies in Avi’s ingenious way of playing with words that is just plain brilliant. He writes in epigrams as voiced through his characters – there are philosophical twists that would not even be perceived as annoying and pedantic – but whimsical, humorous, and authentic. Here are some of them:

“Odo,” she said, “do you think magic is nothing but life in haste?” The bird shook his head. “More likely it’s the other way around: life being the slowest magic.” (p. 164)

This one though is my personal favorite and I believe captures the essence of the entire book with the main character’s quest for immortality:

“Living is my life. Have you any idea how difficult it has been to preserve myself for this moment? To avoid accidents, illness, and violence. Think how hard it is to keep oneself from death!”

“To what purpose, Master?” said Odo.

About Avi. Iphigene (or Mary as she was named here previously – we changed it so that there’d be no confusion about our names which are anagrams) has done a review of Avi’s Strange Happenings here. And she has also given a detailed description of the author Avi in her post. If you wish to know more about the author, click here to be taken to his official website.

The Book without Words: A Fable of Medieval Magic by Avi. Hyperion Publishing, 2005. Book borrowed from the community library.

5 comments on “The Book Without Words: A Fable of Medieval Magic by Avi”