I did not have the energy to blog Friday night since it was a looong (and extremely enriching) day, beginning from 9 am and ending at roughly past 9 pm. I started Day 2 with John McKenzie’s Negotiating the Folktale, a session which I facilitated.

The reason why I specifically chose this session to facilitate is, one: I  did a presentation on folktales; two: I thoroughly enjoyed last year’s AFCC primarily because of John’s presentation on postmodern picture books. As per usual, he brought a number of books with him as could be seen here:

Refreshingly, there were no powerpoint slides (which is also the way he did his talk last year), but he brought handouts with him which are filled with notes on how the fairy story Cinderella in particular could be shared in the classroom in a variety of ways. John is a Principal Lecturer at the University of Canterbury College of Education. He has also designed and implemented the graduate level Diploma in Children’s Literature in the University.

Once again, I have a list of many more picture books to borrow from our community libraries here, namely: Princess Furball by Charlotte Huck and Anita Lobel (which as he noted breaks away from the McDisney Perspective), The Korean Cinderella by Climo, S., Yeh-Shen by Ai-Ling Louie and illustrated by Ed Young (which we have reviewed here), and Wishbones by Wilson B. and illustrated by Meilo So, and The Gift of the Crocodile by Sierra, J. and illustrated by Reynold Ruffins – to cite a few. This should prepare us for our Fractured Fairy Tale theme sometime July-August for GatheringBooks.

The next session I attended was by Dianne Wolfer from Australia “Turning Life Experiences into Fiction.” Dianne is author of 15 books for teenagers and younger readers. I am excited to read and review her Lighthouse Girl which won the children’s choice West Australian Young Readers’ Book Award and shortlisted for the Crichton Award and voted a CBCA Notable Book.

I thoroughly enjoyed this session since it was more hands-on and interactive and really appeals to the writer in everyone. While she did show most of her works as could be seen in the photos below, she also shared what the narrative was behind each of the books, what ‘life experiences’ inspired her to create these lovely books. She is definitely another Australian author we have got to feature here on GatheringBooks.

She also candidly shared that a lot of people would give her beautiful notebooks, knowing that she is a writer. However, these lovely notebooks do not work for her, since she would much rather capture her ideas on scraps of paper and collect them in her Ideas Book which happens to be frayed, well-loved, and quite tattered.

She encouraged people to come up with their own system that works for them in writing. She also asked the participants to think for three minutes to come up with a phrase, a line, or a verse that would capture moments from their (a) childhood, (b) teenage years, or (c) the last ten years in their lives and simply jot them down. She noted that these are the seeds for potential stories.

She also noted that if you are a teacher, it is important to not look over your students’ shoulders as they jot down some of your key questions meant for them to develop their ideas, and to give them that space and the freedom to write.

The next session I went to was by Kelly Sonnack from the US entitled The Children’s Market: What has Changed and What Sells Now. Very important issue that really needs to be covered. The session was facilitated by Dianne Wolfer (Dianne was very busy this day, I am assuming).

This 60-minute presentation was truly a rapid-fire overview of titles that made it big in the market. And I just realized after this talk that wow… as well-read as I thought I was, boy, do I have a long way to go. Kelly is a Literary Agent for the Andrea Brown Literary Agency after agenting for nearly three years with the Sandra Dijkstra Literary Agency. 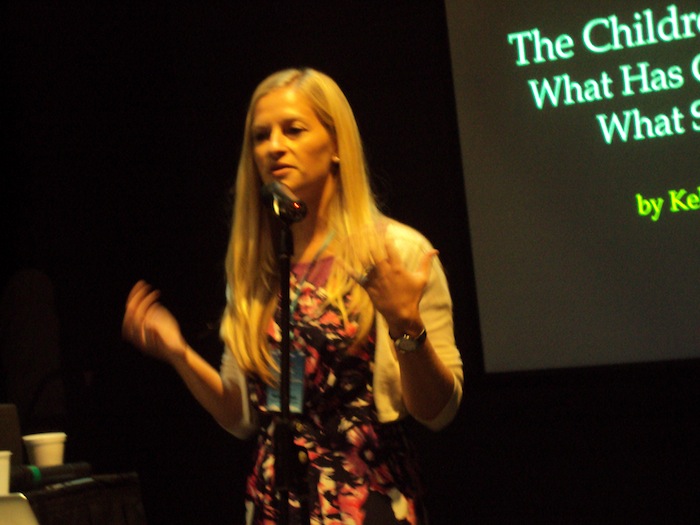 Prior to that, Kelly worked for the publishing giant Reed Elsevier where she was an Acquisitions Editor. She represents all realms of children’s literature, so boy, does she know her stuff.

She covered three major issues during her talk: 1. Why Writing for Kids Rocks. 2. How the Market has Changed and 3. What’s working in YA/MG.

For Issue One, she explained that children’s literature is an area of steady income for publishers and even growth for some. She related that the children’s market is “cutting edge, flexible, and experimental (because its readers are).” For Issue Two on how the market has changed in picture books, she shared that picture books are harder to publish now than in the 80s primarily because of competition from favorites (long since dead) like Dr. Seuss for instance; and that it is difficult to sell across foreign markets.

For Young Adult, though, things are less bleak. It is now very profitable for publishers given the major effect on adult readership by authors such as Stephanie Meyer and J. K. Rowling. As she noted, it is not taboo now to read what your kids are reading. Bookstores now have teen sections and there is a lot of interest within the foreign (new imprints) and sales into film. For Middle Grade, she related that this an area seen with major potential for growth and that there is a lot of cross-over made recently into film, as could be seen with The Diary of a Wimpy Kid (which Fats reviewed here).

For Issue Three, she shared that dystopian and light sci-fi are what’s working in YA/MG. She thinks that dystopian novels have foreign appeal because it is not simply exclusive to any particular culture or country. Titles include Suzanne Collins’ The Hunger Games, A Long, Long Sleep by Anna Sheehan, Feed by M. T. Anderson. Fantasy stories with a steampunk variant (where you see references to machine cogs or animals merged with machines and the like) are a hit now. Titles of books that made it big include the Percy Jackson Series, Scott Westerfeld’s Leviathan, and The Cabinet of Wonders by Marie Rutkoski. There is of course the paranormal trend with Shiver by Maggie Stiefvater. She explained that novels like this usually work because they are able to kind of turn the paranormal in its head and introduces a new variation to what would otherwise be considered a hackneyed theme. Other titles include The Forest of Hands and Teeth by Carrie Ryan, and Hush, Hush by Becca Fitzpatrick.

The next session is what I would consider the highlight of Day Two: Nina Sabnani’s session on Evoking Imagination in Illustration and Animation Films as facilitated by Gavin Bishop from New Zealand.

Nina is a film maker, animator and a published illustrator of children’s books. For this session, she shared with us her most recent work entitled Home which is based on the traditional Kaavad story telling tradition of Rajasthan and designed to elicit stories from children.

I like how this particular session drew upon the authentic stories as coming from the Kaavad storytellers themselves. It has truly captured the essence of what it means to be a weaver of tales. I am including here a short video clip I got from Nina’s talk. I would be blogging about the Singapore Children’s Literature Lecture Award separately. =)

Enjoy this nine-minute video clip as created by Nina. =)