I am so happy to have found this book just this afternoon from our community library – the exquisite book cover done by P.J. Lynch has captured my attention and made me fall in love with the book. Apparently author Susan Wojciechowski has won the Pennsylvania Library Association’s Carolyn W. Field Medal while P. J. Lynch received the Kate Greenaway Medal for this book. Truly an amazing find.

On the surface, it seems like a fairly simple story of a grumpy old man (a veritable misanthrope if ever there was one) finding love – it also has wonderful parallels with the entire spirit of Christmas: the presents, the cookies, warmth by the fire and healing of old hurts and heartaches.

Mr. Jonathan Toomey is called Gloomy Toomey by the children who follow

him around. He has earned the nickname because of his dour disposition and the darkness that seems to surround him:

He went about mumbling and grumbling, muttering and sputtering, grumping and griping. He complained that the church bells rang too often, that the birds sang too shrilly, that the children played too loudly. 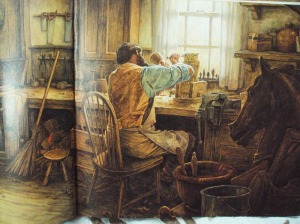 Naturally, there is a story behind Toomey’s quiet despair masked in anger directed at the whole universe: he has lost both his wife and child three days apart from each other after becoming very ill.

So Jonathan Toomey had packed his belongings into a wagon and travelled till his tears stopped. He settled into a tiny house at the edge of a village to do his wood-carving.

Things started to change for Gloomy Toomey when there was a knock on his door one winter morning. It was the Widow McDowell and her son Thomas who wanted the best wood-carver in town to recreate the very special set of Christmas figures that they have lost when they moved town. The Widow McDowell, a very beautiful woman (I just love the way that PJ Lynch

illustrated her features) was hoping that the nativity figures would be done for Christmas (two sheep with curly wool, a cow, an angel, Mary, Joseph, Baby Jesus and the Wise Men) to which the grouchy Toomey replied:

‘They will be ready when they are ready,’ he said.

‘But I must have them by Christmas. They mean very much to me. I can’t remember a Christmas without them.’

‘Christmas is pish-posh’ said Jonathan gruffly and he shut the door.

As I was reading through this I am reminded of quite a number of things: one would be the character of the Grinch who I could just very well imagine saying “Pish posh, Christmas be gone” and there is also Ebenezer Scrooge from the

Ghost of Christmas Past – and so many other characters who just refuse to give in to the joy that is Christmas. Second, I am struck by the fact that Toomey is a wood-carver while Jesus was a carpenter during his growing up years. The parallels are striking. There are so many other Christmasy elements that can be teased out in the narrative, I shall leave it to teachers/educators and loving parents (who I am sure would enjoy reading this story aloud to young bright-eyed tots on Christmas eve) to analyze and identify each one of them.

An unlikely friendship soon developed between Toomey and the young boy Thomas who wanted to learn how to carve. Promising not to move an inch or even say one word, Toomey relented and allowed Thomas to watch him work.

Thomas sat very still. Once, when he needed to

sneeze, he pressed a finger under his nose to hold it back. Once, when he wanted desperately to scratch his leg, he counted to twenty to keep his mind off the itch.

Yet despite this, Thomas can not help but inform Jonathan Toomey in his innocent well-meaning way that he was doing the sheep wrong because his sheep was supposed to look “happy.”

‘Mine did,’ answered Thomas. ‘They knew they were with the Baby Jesus, so they were happy.’

And so it went with the cow who needed to show pride, the angel who needed

to look important and Mary who was looking at her child with unparalleled love as her newborn son reaches up to her.

As Toomey carves these wood figures for Widow McDowell and her son, he is forced to face his demons, literally stare at the source of the nagging pain in his chest so that little creatures could emerge from his hands, his grief being gradually chipped away like piles of wood shavings on the floor.

It is truly a poignant tale of deliverance. Whether or not Gloomy Toomey would finish the nativity figures in time for Christmas and whether he would smile again, I shall leave for you to discover.

The author Susan Wojciechowski used to be a school librarian until she started writing. The jacketflap indicates that The Christmas Miracle of Jonathan Toomey is her first picture book. If you wish to know more about her, click on this link to be taken to her official website. 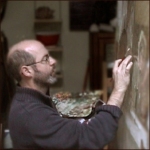 P. J. Lynch is a multi-award winning illustrator who has worked as a Children’s Book illustrator since the 80s. Some of his awards as indicated in his website include the following: Mother Goose Award, three-time awardee for the Christopher Medal, and the prestigious Kate Greenaway Medal for the Christmas Miracle of Jonathan Toomey.

I am also floored at the fact that this beautiful picture book has been made into a movie.

I saw this trailer on youtube which stars Tom Berenger and Joely Richardson. It captured perfectly my vision from the book. The picture book and the movie which resulted from it have the qualities of a true Christmas Classic. Enjoy the short videoclip.

Sources:
Book was borrowed from community library.
Book photos were taken by me.