I was dreading doing a review of a Colin Thompson YA lit primarily because I am such a huge fan of his picture books. I was afraid that I might be disappointed and that the full-length chapter book might fail to live up to my expectations considering how much I am in love with The Alchemist, Castles, Falling Angels (among others).

I read this while on the plane going to Brisbane and people were just staring at me as I can not help but laugh out loud. This book did not fail to deliver. It’s an uproariously funny book that has a cohesive, tightly-woven plot that was literally made into a veritable playground by Thompson. You know that he was just taken over by the characters who were walking all over him, playfully prodding and poking him, he can not do anything but surrender to their wicked atrocities, it can not help but simply delight.

reminded me of my old favorite film, Addams Family Values with all its quirky family members who are gloriously gothic, you could just eat them up for breakfast (that is, if they haven’t eaten you for dinner the night before). The parallels are quite evident with Nerlin and Mordonna Flood and their seven children (six of whom were made in the cellar). However, Colin Thompson’s boundless wit, humor, and extremely divergent mind – has made The Floods distinctive and valued for its highly-individual and extremely-queer charm.

Meet the Floods. Rather than being a family of accountants and bankers (not that there’s anything staid or boring about being an accountant, no sir), the Floods are witches and wizards. Mordonna and Nerlin’s first six children were made using an ancient recipe book, Jamie Oliver sauce pans and an extra large turbocharged wand. There is a Flood Family Files at the very end of the book which describes each family member and their likes/dislikes ala slumbook along with Thompson’s classic illustrations (I’ve been looking everywhere for his Cafemax trademark as seen in his picture books, but I can not for the life of me find them in these pages (I may not just have looked hard enough).

The eldest is named Valla. He is 22 years old and he works in the local blood bank 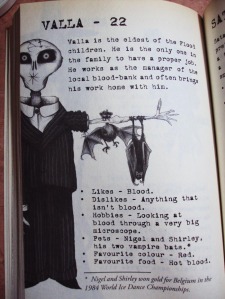 which is mighty convenient for him because he likes/enjoys/loveslovesloves blood. Valla’s vampire bats (shown in their full cute glory in the picture on the right) named Shirley and Nigel are said to have won the 1984 World Ice Dance championships for Belgium. How talented!

Satanella, aged 16 is the second child. Let me quote from Thompson himself since the lyrical quality of his descriptions might be lost if I attempt one of my own:

Satanella was once a little girl as pretty as a bag of eels, but after a 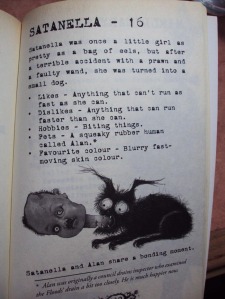 terrible accident with a prawn and a faulty wand, she was turned into a small dog. (p. 149)

Please note that Satanella is playing with a squeaky rubber human here called Alan. No real person was harmed as this picture was drawn (I hope).

The other siblings are Merlinmary (Mm) aged 15 who is neither girl nor boy (even Merlinmary apparently doesn’t know). While known as a “she” thruout the book, Thompson warns that Mm could also very well be a “he.” Mm’s special talents include making electricity; her favorite color is ‘violent yellow.’ Winchflat, aged 14, is their family genius (and computer hacker extraordinaire). Then come the twins Morbid and Silent aged 11. According to Thompson:

To the untrained eye, they are identical twins but actually they are mirror twins, which means they are identical in every way except horizontally. They are like the reflection of each other in the mirror. Morbid is right-handed, Silent is left-handed – except during the full moon when they change places. They communicate with each other by telepathy (p. 152)

After these odd assortment of lovely creations, Mordonna hankered for a cute baby girl with whom she can play dolls with:

Thus, Betty the youngest of the Floods was born the “normal, ordinary way” without magic, similar to the way that you and I were made (assuming that you weren’t knitted, as Thompson pointed out in his footnote). Speaking of the latter, this is precisely what makes the book unique, aside from the zany characters of course. The footnotes are just plain inspired. It illustrates just how much fun Colin Thompson had as he was writing this book. Add to that the lovely lovely illustrations, I can’t even think of a genre for this. It isn’t a picture book, and it seems an injustice to call it a chapter book. It’s essentially an illustrated YA fiction that seems to carve a niche of its own.

The Average and the Normal are Over-rated. I believe that what makes this book stand out aside from the off-the-wall footnotes and the quick-witted manner in

which it was conceived, written and illustrated – would be its portrayal of the average suburban American family who fail to establish an emotional bond largely because their moments are filled with television, football, and yes greasy burgers and fries morning, noon, and night (we haven’t even thrown in the loud curses, constant fighting peppered with screams and broken bottles, and the endless garbage that is their front yard). While it is of course a parody of what usually happens – there are elements to it that one can relate to, and you see Colin Thompson being cheeky in the way that he discusses the empty, loveless, staid, ordinary life that most families supposedly enjoy and crave for. On the other hand, you have this husband and wife who obviously enjoy each other’s company (and their toads, bat legs, and diet blood). Foremost in their mind (similar to most parents) is

the laughter, well-being and supporting the genius, talents and the eclectic passions of their assorted offspring. The fact that they have buried relatives eating stray cats in their backyard or a mailbox that bites the postman’s fingers and watch off do not really matter that much when perceived from a larger scheme of things.

This sense of being “different” is highlighted in young Betty’s experience since she is the only one among the siblings who attend a “regular school” in contrast to her brothers and sisters who attend a wizard school. Betty would often be ostracized because she enjoys eating lizards and frogs which the other kids found gross. This is how Betty responded to the cruel children.

‘This is what they’re made of,’ said Betty and a huge smelly pile of gross animal bits appeared on the table. ‘Look: cows’ bottoms and eyelids, sheep’s nostrils and chicken beaks and chemicals and scum.’

It highlights that what we consider ‘normal’ may not really be that ‘normal’ after all. And that oddities and strangenesses have their place in the overall order of the universe.

End notes. I read the entire book during the flight – it was that fascinating and quick a read. How The Floods dealt with their annoying neighbors who managed in more counts than one to destroy the relative peace and quiet of the neighborhood, I shall leave to your quiet reading of this lovely book. This is ideal for children aged 6 to 12. I have a feeling that boys would respond to it really well with all its icky and gross elements. However, the girls would most likely enjoy and relish those things with equal ease. The community library here has the entire set (I can’t wait to borrow them this Tuesday).

Educators and parents on the other hand might want to read the book first and review whether they feel that it is something that their students/ own children would relate and connect to. The book is wonderful though in enhancing divergent thinking and encouraging humor, wit, and word play. It highlights just how

spontaneous and seamless one’s writing can be if the mind is uncontained and unfettered and just plain inspired and flying in the wind. I am naturally biased being a Colin Thompson aficionado, but I do know that it may not be something that everyone can truly relate with. If you’ve read the book, do drop us a line. I’d love to hear your thoughts about it.

The Floods has an official website with games and activities that the children/students can enjoy – click here to be taken to the site. Here you’d see Winchflat’s Secret Attic Cellar, Merlinmary’s power station, Betty’s playhouse and so many other things to explore. Enjoy!

Sources:
Colin Thompson picture from his website: http://www.colinthompson.com/page7.htm
Addams Family Values photo from http://tytempletonart.wordpress.com/2010/04/08/chas-addams-comics-that-matter-to-me-anyway/
Book is my own personal copy.
Book photos were taken by me.

4 comments on “The Floods [Neighbours] by Colin Thompson”