“When crime takes a turn for the weird, the police call Trese.” 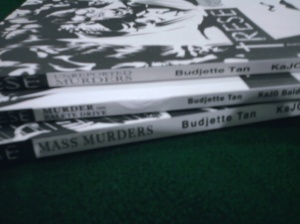 The inspiration behind Gathering Book’s November Special was this particular comic. It was early October of this year when I finished reading all three volumes of Trese. I shared with Myra my plan of holding paranormal/scary/haunting reviews on Halloween. Picking up from that idea our discussion led to making November a Haunting Tales special.

I discovered Trese a few Decembers ago. I had picked up volume 1 as a present for a friend. I hadn’t read the book, but the synopsis at the back was enough to make me purchase is. It was around May the following year that my friend told me she enjoyed the book and had already bought the second volume.   It took a while before I actually purchased for myself my own copy of Trese and from there I found myself writing this feature on the comic.

My foray to comic-book reading and local comics can be traced back to pre-university days. I use to sneak into my brother’s box of marvel and dc comics. While I am far from being an aficionado, I enjoyed sitting lazily and devouring whatever comic book my brother had. However, local comics were another story. I’ve never read any local comic book/graphic novel until I was introduced to Arnold Arre’s Mythology class. A classmate in my senior year lent me Arre’s Mythology class and I was amazed. The combination of local folklore and modern day human beings had me at hello. Thus began my interest in local comic books/graphic novels that explore the paranormal world common among Filipino tales.

Before we formally set foot on the review, be warned this is longer than usual. I tried to keep it tight reviewing three volumes of Trese.

“Trese” refers to our main protagonist, Alexandra Trese, as well as a play on its meaning—a Spanish-adapted term by Filipinos that means thirteen. Like that of the western notion, 13, it seems to the Filipino culture is an unlucky number. The number holds with it something mysterious and paranormal. It’s an apt last name to our protagonist whose specialty is in the mystical, paranormal, and the underworld.  Trese may also refer to the number of cases the volume is divided into. There are 13 cases.

Case 1: At the intersection of Balete Drive and 13th Street

Case 2: Rules of the Race

Budjette Tan and KaJO Baldisimo, author and illustrator respectively of Trese didn’t envision the comic to be as popular or as long as three volumes. Hence, Volume 1 was written as a standalone. Taken on its own, one feels it’s very much like picking up a Spider Man or Batman comic book and appreciating it as that one issue.

I love that Trese began in Balete drive and 13th street. If there was one place in Metro

Manila where urban legends of white ladies and car accidents should happen its Balete drive. Paying homage to that part of the city with the case of the dead white lady was, I believe, a good way to start.  From case 1, we pick up a few things about our main protagonist. She had connections with the police (Capt. Guerrero) and was called over for cases that are beyond forensic investigation. The dynamic between Trese and Guerrero is reminiscent of Batman a Commissioner Gordon. I get the feel of Batman more as I got through the novel. Parts of me felt like Trese was a cooler Batman (she’s a girl that kick’s ass…I mean seriously, how can she not be cooler than Batman?! Lol). While Batman’s choices of weapon are far more technologically advance than Trese, we are introduced to Trese’s choice of weapon in volume 1. It’s referred to as Sinag—a Kris like blade. A similar blade is used by Lam-ang in Mythology class.

A Kris is said to be both a weapon and a spiritual object. It is said to hold a presence or essence. We also meet her sidekicks—the kambal—referred to as half-breeds (or half-aswangs). The Kambal in full battle gear wear a mask (one sad and one happy) and a healthy appetite for battles and shooting.

Volume 1 reveals a pattern across each case. Each case is introduced with a map and a highlighted location of the case. This format gives the feel of how Trese doesn’t belong to one city, but to the whole metropolis, whether it’s in New manila, Ortigas or even Mandaluyong. It also give the feel that while some areas are known for paranormal activities, other areas too have their own share of sighting.

Though we are familiar with aswangs, nuno sa punso, and tikbalangs, Trese doesn’t limit itself to these. It mixes other elements that create the underworld. We find reference to the wind tribe (amihan and habagat), to the santelmo, and to demons. Ideas like kaluluwa trafficking and illegal paranormal activities lay down an unseen structure between the creatures of the other world (or underworld) and the human race. Even to retired superheroes, as case 4 illustrates. Volume 1 began with an ode to an old legend of Balete drive and ends with another ode to Darna. If there’s one case in this volume, I’d like people to read, it’s the last case. It’s a wonderful tribute and twist to Mars Ravelo’s Darna.

Volume 2: Unreported Murders continues on with the tradition of mapping out the cases.  Containing four cases, namely:

Case 6: The Outpost on Kalayaan Street

Case 7: Embrace of the Unwanted

If there’s something Budjette Tan doesn’t fail to add into his stories, it’s the reference to the city. It gives the feel that the author knows Metro Manila well, as well as the stories that the metropolis carries. Case 5 was a feature to the entertainment industries wherein to the Filipino readers the play on the actresses’ names doesn’t escape us. Volume 2 delves into paranormal love affairs (duwendes and actresses), a lesson on respect, abortions, and sacrificial offerings.  In volume 2, Tan and Baldisimo, gives us more of Trese in action. Unreported Murders offers more hardcore action where Trese and the Kambals find themselves fighting a huge number of creatures whether they are zombies or tiyanaks.

In this particular book, I love how more recent urban legends are juxtaposed to familiar folklore characters. In the Case 7, we are introduced with the snake son of a famous mall owner.  It’s reminiscent of the urban legend of the snake in the dressing room in the early 90s. The snake son is a suspect to a mall murder—a case of tiyanaks. I know little about tiyanaks, however in Trese we find they come to be after deformed or unwanted babies are left in the forest. Interesting enough this back-story is applicable to aborted babies.  Tan takes us further into a world of interaction between the modern world and the ancient world of Philippine mythology and folklore with Case 8. In case eight we meet Bagyon Elektro and his son Kulimlim (Prince of lightning and thunder), the former as head of the famous electricity company in the metropolis and the latter as provider of fortune in Livewell Village.

Notable in volume 2 is a deeper understanding of how famous the name Trese is amongst the police force and the underworld. In both volumes we hear the comparison of daughter to father. A comparison the present guardian of the city, Alexandra Trese, shoves off with a simple reply that she is different from her father and she runs it the way she sees it fit.

Volume 3 is my personal favorite. However, its status as favorite can only be brought about by the first two volumes. After eight cases of getting entrenched into the world of Trese’s Monsters and god, fighting one can’t help but wonder how it all came to be. We only get clues of Alex’s father—Anton Trese and how this ‘talent’/ tradition have been in existence since Alexandra Trese’s grandfather. Volume 3 offers us that back-story.

The back-story tells us of the prediction related to Alexandra Trese’s life as the sixth child of the sixth child. We learn that all of Anton Trese’s children were born with a mission dealing with antiquities, the underworld and the spiritual.  We also discover the significance of Trese’s weapon of choice—her Sinag.

Volume 3: Mass Murders has the most number of cases, namely:

Case 12: The Baptism of Alexandra Trese

The cases in the two previous volumes were independent of each other; however, the cases in volume 3 are woven together by the history behind the Trese tribe, the kambal, and the war god Talagbusao.  Volume 3 picks up from Case 8’s ending wherein Bagyon Elektro warns Trese of an impending storm. Mass Murder is more cohesive in storyline, more informative of the characters, and more action packed. It speaks of predictions, of traditions, and of old enemies that make it, to me, a classic comic. Paradoxically, as violent as the story is, it is the most poignant. It capture Trese’s coming of age, as well as the bound she forms with her so called sidekicks.

While Marvel and DC comics have their place in my heart, nothing is more wonderful than discovering that same quality of artistry and writing in local comics. I’ve compared Trese to Batman. Even her ‘bat cave’—a bar called diabolical—has its own Alfred, a guy called Hank, however Trese is not batman. Her city isn’t fictional. Its real places and the stories are built on legends well ingrained in Philippine society. Though fiction, as a reader born and raised in this metropolis one can’t help but entertain a moment wonder if this warrior-babylan does exist and whether or not she indeed guards it. Keeping us, average human beings, safe from the diabolical. 🙂

On the Kris and image: http://en.wikipedia.org/wiki/Kris

The pictures were taken by the author of her own copies of the comic.