I was fortunate enough to have found this book in Books for Less back in the Philippines for roughly SGD 2.50.  And with its creepy storyline and superb illustrations, this book is indeed perfect for our Haunting Tales special in GatheringBooks.

Kate Culhane, A Ghost Story is actually based on an Irish folklore, specifically coming from the Gaelic-speaking districts of Ireland. Originally entitled as “The Blood Drawing Ghost” – it

appeared in the collection of folk tales (called “Tales of the Fairies and of the Ghost World”) collected and transcribed by Jeremiah Curtin, an Irish-American scholar.

The story revolves around Kate Culhane, an impoverished Irish girl who lived in a small cottage with only one window and one door. After her mother’s death, life became even more difficult for her with the garden growing nothing but weeds and the cows giving hardly any milk. She would often visit her mother’s grave and share her woes and troubles. This was when her trouble began.

As could be noted by any reader, the graveyard is indeed the perfect place for eerie, supernatural events. Kate accidentally trespassed on a newly-filled grave while visiting her mother, and from that moment on, her entire night was filled with gore, blood-streaked oatmeal, and trance-like obedience to this despicable ghost who haunted the entire narrative.

“As though Kate had no will of her own, she knelt and pulled open the coffin lid, and a dead man climbed out of his grave. When he spoke, his voice was just a whisper, cold as clay and hard as stone. Kate thought she could hear in it a loneliness as deep and black as the sea.”

While the storyline itself (told over a hundred years ago in the Irish countryside) is powerful in evoking creepy images, this image of Kate carrying the ghost in her back leaves an even more vivid and lasting impression. The powerless Kate had no choice but to go through each of the quiet sleeping houses with a ghost whose “weight was heavy as a sack of stones” until they found a house with no holy water in the house. Incidentally, this is the same house of the young man whom Kate had her eye on. However, knowing how poor she was and without any dowry to speak of, she felt that she had no chance to capture the young dark-haired merchant’s son. 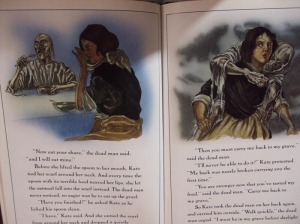 While inside the dark, quiet house (with everyone fast asleep – as if an enchanted spell or curse has been cast among the household) – the ghost demanded that Kate serve him some food. Finding only dry oatmeal in the kitchen, the ghost asked for a sharp knife and proceeded to slowly creak up the stairs with Kate carrying him, and drew blood from all three of the merchant’s sons. He asked Kate to mix the bowl of blood with the oatmeal for him to eat. While gruesome and horrific, the tale is told with such simplicity and honesty that the violence is eased out somewhat. And with the spine-chilling illustrations, this book can not help but be perfect for any read-aloud – especially for eight to twelve year old children.

and outmaneuver the ghost’s sinister dealings and surreal way of spellbinding the people it meets. Heartbroken by the death of the merchant’s son, find out by reading the tale how Kate Culhane managed a happy-ever-after (with gold coins to boot) despite of (and maybe even because of) the terrifying encounter that she had with this unhappy ghost.

Michael Hague happens to be one of the most celebrated illustrators in the United States. He has illustrated children’s classics such as The Wind in the Willows, Velveteen Rabbit, The Secret Garden and Peter Pan just to cite a few. His website could be found here.

5 comments on “Kate Culhane, A Ghost Story By Michael Hague”