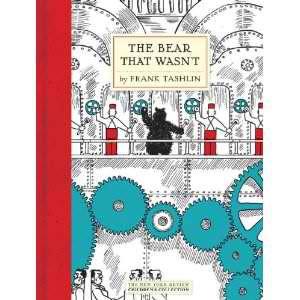 about. I find it difficult to categorize this book since it isn’t strictly a picture book, but it isn’t a full-blown YA lit, either – nor is it a graphic novel or a comic book. It’s just your good-ole classic children’s book with illustrations built within the storyline – the kind of book that I grew up with onceuponatime. I am suddenly reminded of the Janet Evans talk that I attended several weeks back and how all these genre could now be subclassified/subcategorized.

Anyway, the narrative innocuously begins with this Bear just going about his daily routine, sniffing the air, looking at the direction the birds fly, and noting that ahh-it’s-winter-then-i-should-hibernate-mode – all very natural, logical, no-nonsense. Just your average bear walking around, hurting no one, going about his day.

“He knew when the geese flew south and the leaves fell from the trees, that winter would soon be here and snow would cover the forest. It was time to go into a cave and hibernate. And that was just what he did.”

winter, there were men who came in the forest:

“lots of men, with charts and maps and surveying instruments. They charted and mapped and surveyed all over the place… They worked and worked, and worked, and finally they built a great, big, huge, factory right OVER the TOP of the sleeping bear’s cave”

This was the part where I was reminded a little bit of Dr. Seuss’

Lorax what with all the trees unceremoniously chopped, the entire forest flattened to give space to a bustling, busy factory with workers who are paid by the hour by bosses who have bosses who have bosses making up the long chain of command. And so, this simple, easygoing, terribly-uncomplicated Bear wakes up in Spring time to white corridors, rooms filled with gears and machineries, and people milling about telling him that he needs to get to work and to please stop pretending to be a bear.

As the foreman told him: “That’s a fine excuse for a man to keep from doing any work.” And the bear, without guile and with utter simplicity announces “But, I am a bear.” This testament to his Bear-ness continues right up to the highest ranking official in the chain of command (Foreman – General manager – 3rd Vice President – 2nd Vice President – First Vice President). I like how this British Bear (well, he does sound like one with all the propriety and manners built into everything that he says), in his piteous attempts to explain who he really is, very calmly states: “This is a dreadful error, you know, because ever since I can remember, I’ve always been a Bear.”

I was flipping through the pages to see whether there would be any instant when he would just blow his “bloody”-top off and express his displeasure with a resounding ROAR and EAT these people up just to prove that bygollyheisabear! But … I’d leave that up to you to find out.

According to the people around him, he can not possibly be a bear because “Bears are only in a zoo or a circus. They’re never inside a factory and that’s where you are; inside a factory. So how can you be a Bear?” That does sound right, doesn’t it? But is it right? So he is nothing but a silly man who needed to shave and wore a fur coat. 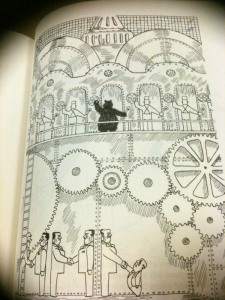 all the men, because (1) he has nowhere else to go (2) I suppose he felt tired constantly trying to explain himself (3) it seemed like the path of least resistance – what else is he to do anyway? However, similar to how industrialism is portrayed in the Lorax, these factories usually fizzle out, leaving in its wake an enormous amount of dirty debris, shards of smoke, and the dying breath of the trees. And then it’s winter time again. So the bear now wonders: is he really a bear? Or is he a silly man in a fur coat who needed a shave?

Would you stop being who you were simply because the people around you insisted that you were someone else? I just love this story for so many reasons:

Environmental Concerns. As an educator it just touches on so many core issues that can be talked about in class. The power of

the narrative is that unlike the classic Lorax which tends to be outright in its message with “I speak for the trees for the trees have no tongue” – this simple Bear is nothing but a casualty of war – or should we say, casualty of unsustainable environment/industrialization and such – and makes no such proclamations on top of a tree stump (though I believe The Lorax is effective in his zeal, fervor and sheer tenacity).

Identity Issues. Yet despite this, the impact of the former theme is keenly felt in the fact that this hapless Bear is stripped of his home, and worse still, stripped of his identity. A bear with existential queries. Reminds me of Raymond Briggs’ Fungus the

Bogeyman who refuses to be a bogeyman (he would rather think deep thoughts and read poetry) and the Rats of NIMH who still remain rats-but-not-quite. At its core, the book is witty, funny without even trying, and a very quick read that would capture the attention of even very young readers.

The ‘Other,’ Denial, and Invisibility. The book also evokes a sense of “otherness” in the reader – as keenly felt in this image here.

It reminds you of certain moments in your lives when you remain steadfast in claiming that you are someone while the rest of the world laughs at you and says otherwise. It also shows how people 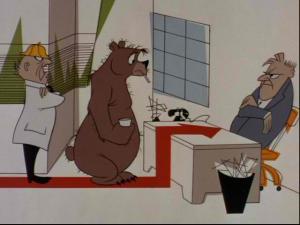 can just blindly go about leading their lives, never disrupting the peace, and dismissing away any oddity – because it’s just too unbelievable to be true. And so a viper in your household is nothing but an ornament or the bear just a silly old man in a fur coat who needed a shave.

This book also affirms what I love most about children’s books. They are not just for children. If you tease out the elements in painstaking/excruciating detail – you might even find things that make you discomfited, cautious, and yes make you reflect on moments in your life when you are the person you aren’t.

Apparently, this book has already been made into a full-blown video classic with Frank Tashlin being a master animator, and as customary now, it’s already on Youtube. Here’s the videoclip, enjoy!